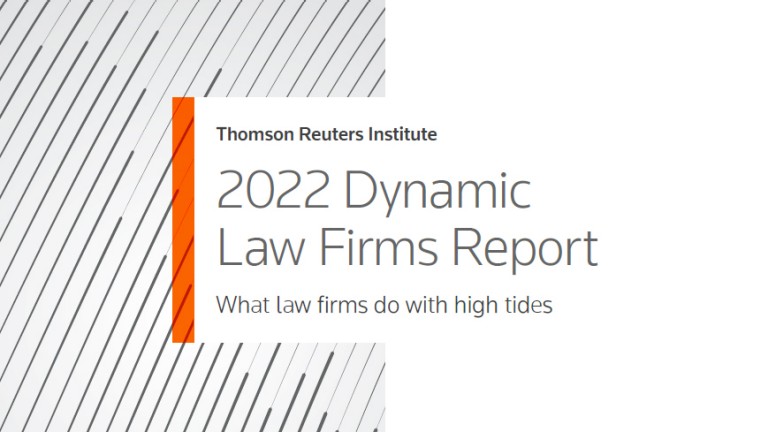 If Hollywood movies are to be believed, pirates may have, historically speaking, gotten a bad rap. In a Hollywood movie, rather than the bloodthirsty scallywags of which history speaks, pirates are often portrayed as charming, charismatic, swash-buckling Robin Hood types, sharing their bounty among captain and crew – more Jack Sparrow than Edward Teach.

As we conducted the analysis for this latest version of the Thomson Reuters Institute’s Dynamic Law Firms report, some of the findings called to mind this romanticized image of buccaneers, especially in relation to our population of market-leading-growth Dynamic law firms. In a legal market in which booming transactional demand is a high tide lifting all boats, we had to dive deeper to witness the decisions that many law firms are making now which are likely to determine their future success.

We found that our Dynamic firms were making unconventional decisions that bucked the industry trends. Dynamic firms retained their advantage despite the treacherous conditions of 2020 and 2021, growing faster in every key performance indicator compared to the average firm. This strong growth was on top of strong growth in previous years. In fact, these firms grew their total profit and profit per equity partner (PPEP) at a rate as fast if not faster than they did in 2017-2019. And in a competitive environment with high-rate increases, Dynamic law firms had significantly higher rate growth than the average law firm while maintaining competitive realization.

Contrast this with the practice seen among our Static population of law firms.

Static firms took advantage of their 2020 and 2021 profit windfalls to make key investments in their firms, yet they still saw their demand decrease. However, Static firms achieved growth in each of our major profitability statistics and actually grew their PPEP at a faster rate than Dynamic firms.

Static firms both pay their lawyers less than the all-firms average and are growing these salaries at a slower pace. Further, Static firms are actively reducing the number of equity partners in their firms while increasing the number of non-equity partners. This is similar to the East India Trading Company, a key antagonist in Hollywood pirate canon, who organized their crews during the golden age of sail with a small, well-paid stratum of officers and a larger cadre of salaried crew.

Static firms, potentially as a result of the practices described above, are experiencing significantly higher turnover than their peers. And despite reducing the size of their equity partnership, Static firms continue to have pointedly lower productivity from those titles.

Static firms are adapting, however, shifting from their traditional focus on litigation into the booming transactional practices at the same pace as Dynamic firms.

While the general prosperity of the industry is of great benefit to almost all firms, these conditions cannot last indefinitely. Bad times must inevitably follow the good. The decisions that firms make now in terms of hiring, structure, pay, and other considerations will likely define their fate in the years to come. Just as important, as partners and associates increasingly ponder whether to jump ship, Dynamic firms are positioning themselves as their most appealing destination.

Thomson Reuters created the Dynamic Law Firms study several years ago with the goal of identifying law firms that have found measurable, consistent growth in key metrics over a period of years. Once identified, these firms are studied to determine what sets these firms apart and leads to their success.

While the methodology applied to this new edition of the report remains unchanged from previous versions, there is one important aspect to mention up front. In the past, each new iteration of this study has involved first redefining the populations of what is a Dynamic firm and what is a Static firm. For this version of the report, however, we decided to instead use the same populations of Dynamic and Static firms we originally defined at the end of 2019. We have a unique opportunity with this year study to explore not only what a successful firm looks like today, but whether the strategies which built sustained growth prior to the pandemic were also a recipe for resiliency and sustainability. These Dynamic firms, selected based on their 2017-19 profitability, revealed in earlier studies that success could build upon success. How these pre-pandemic Dynamic firms fared through the tumult of 2020-21 can tell us quite a bit – whether they regressed to the pack or continued to lead is a source of unique insight.

The foundation of this study are the financial performance records of US law firms across the Am Law 100, Am Law Second Hundred, and Midsize law firm categories.[1] The classification of firms begins by determining each firm’s compound annual growth rate (CAGR)[2] in three metrics: of) overall firm profits (revenue less expenses, not including partner compensation); of secondment) revenue per lawyer (RPL); and iii) overall profit margin. The results of these CAGR calculations are weighted and assigned to a matrix.

The top quartile of firms, those with the best average CAGR results across all three metrics become the Dynamic law firms. Those firms in the bottom quartile who struggled to find growth in these metrics or in some cases saw these metrics contract, become the Static population of law firms. Once the populations are established, we then work our way into the data to determine what sets Dynamic firms apart from Static firms, and from the average population of law firms.

To add further depth to this examination we included Thomson Reuters’ Stellar Performance report, a regular survey of stand-out talent (as nominated by clients), which gives us an internal perspective on these law firms.