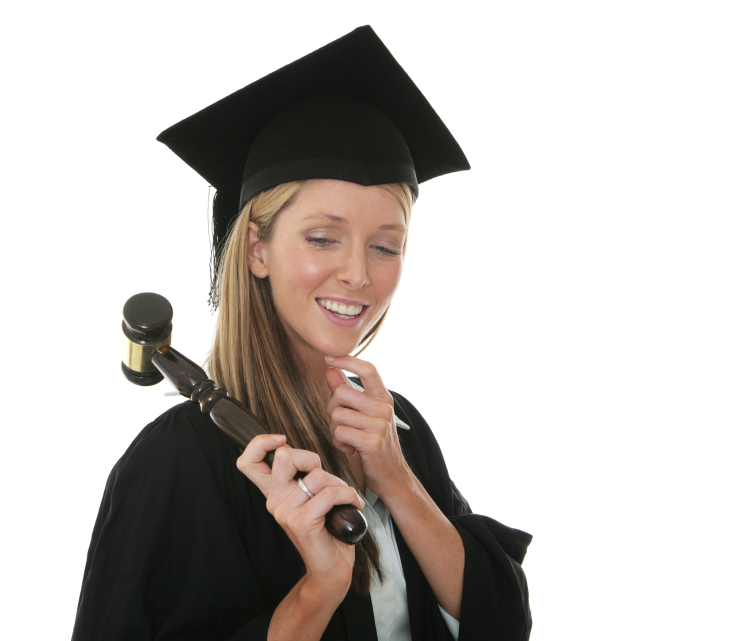 The 2023 US News & World Report law school rankings are out. We’ve already offered some thoughts, but with the benefit of some time to dig in, we’ve got some more to say.

The big story in legal academia right now is the big shake-up. After all, we all just spend the last two weeks screaming about how Ketanji Brown Jackson’s HLS degree was the cream of the crop and then Harvard has the nerve to drop out of the top 3. Bad timing.

But is getting passed by UChicago really awful? They’re both still elite law schools after all. 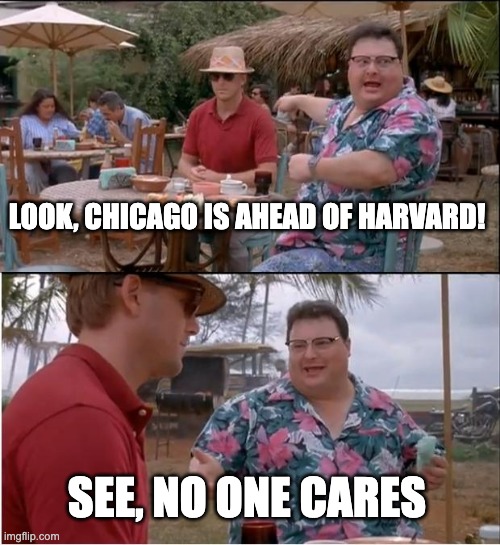 Digging into the data behind the numbers, educational debt stands out: 71.2 percent of the HLS 2021 grads took out student loans for law school compared with 61.3 percent for UChicago. This is only the second year debt factored into the USNRW ranking – they now include average debt incurred obtaining a JD at graduation and the percentages of law school graduates incurring JD law school debt.

Another distinction between HLS and UChicago is employment (long-term, full-time, not funded by the school where bar passage is required or a JD is an advantage). Take a look at the numbers employed at graduation (class of 2020) for UChicago: 94.6 percent; Harvard: 88.1 percent. And 10 months after graduation also show a distinction, though not as dramatic: 95.1 percent for Chicago and 91.8 percent at HLS.

A Jury Of Your Peers

Dean Paul Caron of Pepperdine always breaks out the peer reputation rankings and compares that to the ultimate USNWR ranking. Check out the full comparison over at TaxProf Blog.

This year, the project reveals a much closer and different tussle at the top than the full USNWR methodology would suggest: 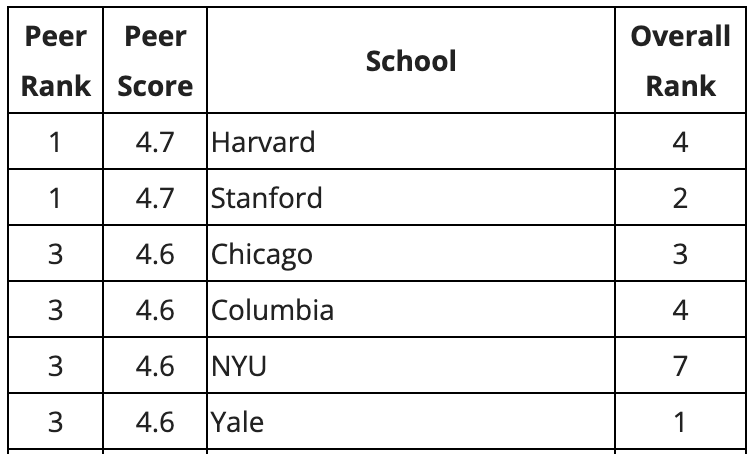 That’s a shuffle. Who’s beer did Yale piss in? By way of comparison, last year numbers tracked the peer numbers. 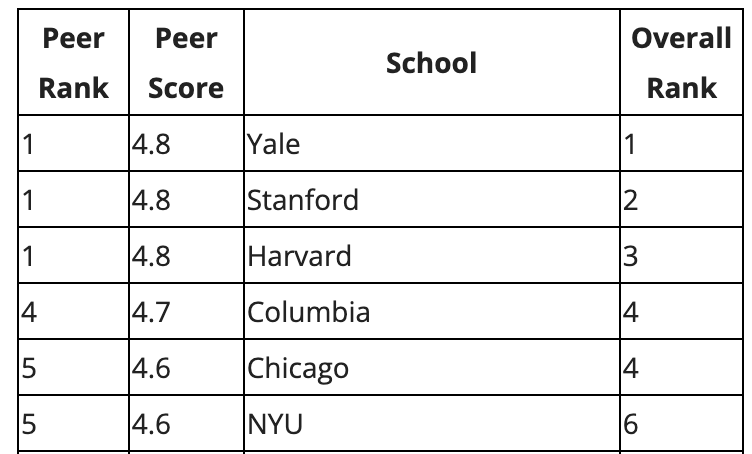 Is this good or bad? Depends on what you’re looking for in a ranking. The ATL Top 50 Law Schools ranking deviates from the US News numbers because we’re trying to provide a figure that maximizes a potential student’s bang for their buck – the most marketable degree with the least lingering debt. By contrast, the US News numbers traditionally provided a raw prestige ranking telling students which schools were likely to recruit the best classes and provide the best education as proxies for ultimate success. 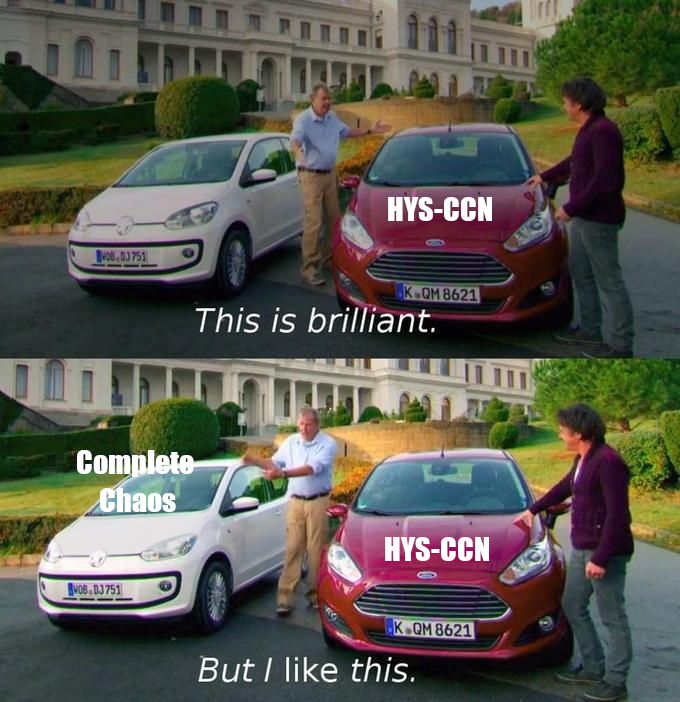 In that world, peer reputation matters a lot.

The peer reputation score is still the biggest component in the rankings, but something’s going on here. The new rankings – lowering the impact of library support and increasing the value of bar passage – weren’t supposed to trigger major changes. But it sure looks like adjustments to the methodology overall have diluted the impact of the prestige factors we’d come to rely upon US News to reflect. Have these changes created a more valuable product for students or just traded its previous value proposition for a muddled picture? We might need a few years to figure that out. The last time there was a shake-up of elite law schools – when Georgetown fell out of the T14 – proved to be transitory, and this year the traditional T14 schools are back.

Second 14 Are… A Lot Cheaper

It’s not necessarily a surprise that schools offering a slightly less prestigious degree would (or at least “should”) charge less. But the amount of the drop-off is significant. The average tuition for the T14, according to US News, is $ 68,772 / year (taking the lower, in-state numbers where available).

These lower tuition numbers are a number of state schools that have set up shop in the second 14 in recent years. Putting aside spendy UCLA, the cohort boasts Texas, Florida, Minnesota, UNC, Bama, and Iowa all posting reasonable costs (BYU is also cheap even for non-LDS students, further driving down the average). The moral of the story is that public institutions may be more worth it than our collective obsession with “T14” might suggest.

Have this year’s rankings put a thumb on the scale for “viewpoint diversity” (the fundamentally racist effort to recast “diversity” to create affirmative action for originalists that went broke in the marketplace of ideas)? It might look that way… though looks can be deceiving!

ASSLaw, which USNWR did the gratuitous kindness of referring to as “George Mason University,” jumped 11 places! USD, most notable as the home of Amy Wax’s co-author in “whining that people seem to want actual scholarly insights instead of racist op-eds,” leapt a whopping 22 slots. Chapman, a school that made headlines all last year as the home of Coups 4 Dummies author John Eastman, made a 16-place charge.

You could throw in longtime conservative bastion Chicago’s ascension and Amy Wax’s Penn holding a lone sixth place slot if you want (though the former is waning in that reputation and the latter has – years too late – taken tentative steps to distance itself from Wax’s shenanigans) and it looks like a big year for the FedSoc folks.

But don’t get too far down the conspiracy train.

ASSLaw saw a major bump in bar passage rate. In 2020 (the year USNWR uses for these rankings), the school had 95.27 percent first-time passage, way up from the mid-80s where the school traditionally sits.

With USNWR increasing up the importance of bar passage this year – even if only by a modest 3/4 point – that could account for some gains. University of San Diego usually sits in the mid-70s for first-timers. Last year it had a weighted average of 85.97 percent. Chapman had an even more dramatic jump from the high-50s to 80.7 percent.

Making a leap like this is all well and good, but when it’s pinned to a single metric, that might be more concerning. Despite the charge up the rankings for this year, are these changes sustainable? Figuring out whether these new bar passage numbers a blip or part of a larger trend for the schools may take a few years, but we will be watching.

Another school that jumped out to me was the University of Montana vaulting 31 spaces. The last time we checked in on Montana last Fall, the school’s dean had just resigned amid a major scandal over the school’s pattern of mishandling sexual assault allegations.

Changing leadership at the last second can disrupt the ranking process, but it’s a testament to the resilience of the students that the school weathered the change and came out better for it.

The back half of the top 50 (ranks 35-50) saw quite a bit of movement. Congrats on Texas A & M’s run into the top 50. Hell, you might think Trayveon Williams was doing the rushing there.

With winners come losers, and the Badgers’ fall 14 spots to 43 is notable. But digging in a little deeper things aren’t as devastating as at first blush. Wisconsin’s 2021 ranking was 38, and in 2020 was 34. In fact, the school has repeatedly traveled up and down this midlevel band, meaning things are right where they usually are.

So what do you all think about the latest round of rankings? Feel free to sound off by email, by text message (646-820-8477), or by tweet (@ATLblog). If you do not like what you see, you may want to check out the upcoming Above the Law Top 50 Law School Rankings. We care about the most important thing you’ll care about when you graduate – and that’s whether you’ll be able to land a job that pays enough to allow you to service your ever-increasing law school debt. Please stay tuned!