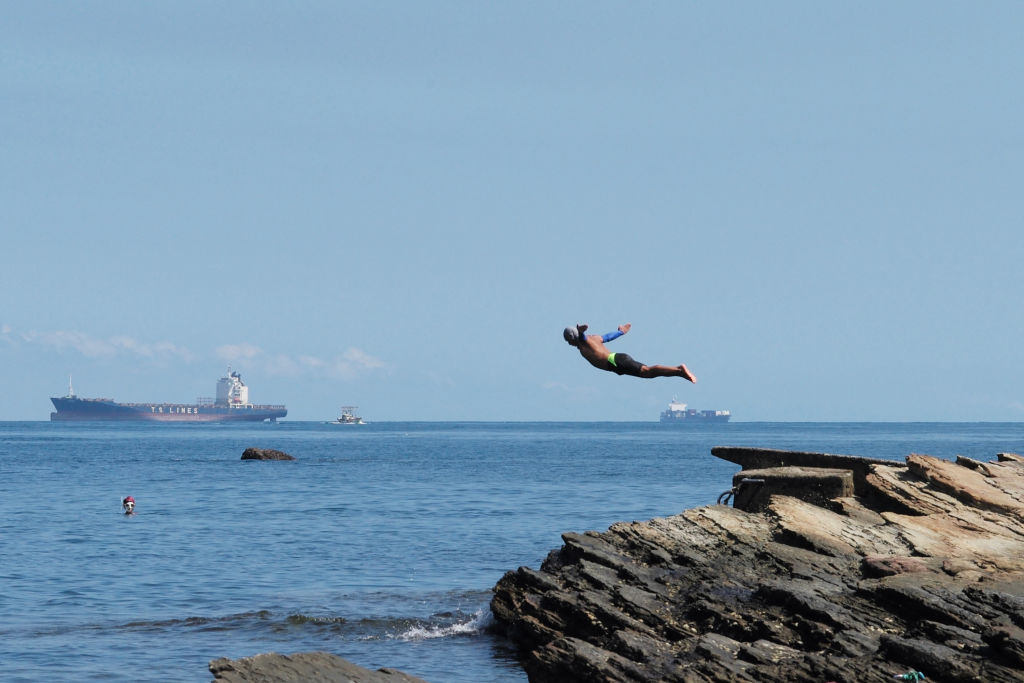 Dozens of ships heading to or from North Asia were forced to shift their routes or slow down to keep clear of the danger zones in both the Taiwan Strait and on the island’s eastern seaboard. An average of 240 ships a day normally pass through the area.

However, the demonstration of China’s military prowess, showing how easily it could seal both Taiwan’s maritime and air access to the rest of the world, served to underline China’s own economic vulnerability.

If a real Chinese blockade were challenged by the United States and the Taiwan Strait were designated a war zone, trade finance and insurance would evaporate for all shipping in the area.

Any real-life disruption of the sea lanes to the east and west of Taiwan would have a crippling effect on China’s own economy, since its major ports of Shanghai, Dalian, Tianjin and others are dependent on passage through waters near Taiwan.

The Taiwan Strait is the major conduit for shipping from North Asia, including China, Japan and Korea, to the rest of the world, and it’s also the most direct route from South China to the US.

The great majority of Australia’s iron ore trade passes Taiwan en route to the northern Chinese bulk ports, as do its shipments to Japan and Korea.

Analysis by Bloomberg showed that just under half the world’s container ships passed through the Taiwan Strait in the first seven months of this year. Among the largest 10% of the global container fleet, 88% made use of the waterway. Tankers carrying around 1 million barrels of oil transit the strait every day.

Although it is possible for ships bound for North Asia to avoid the strait, which is only 130 kilometers wide at its narrowest, the alternative route to the east of Taiwan through the Luzon Strait with the Philippines is vulnerable to cyclones.

China’s foreign ministry earlier this year asserted that it had ‘sovereignty, sovereign rights and jurisdiction over the Taiwan Strait’ and that it was false to claim it was an international waterway. China’s military operations serve to underline its claims.

The US State Department responded that it was an international waterway ‘where high seas freedoms, including freedom of navigation and overflight, are guaranteed under international law’.

Commercial flights were also interrupted by China’s military exercise. Korean Air, Singapore Airlines and Asiana Airlines suspended flights to Taipei, while other airlines, such as Japan Airlines and Cathay Pacific, said they were avoiding the designated areas. Airlines are accustomed to diverting around warzones and military exercises; however, any blockade of Taiwan’s airspace would have profound economic effects.

A large share of Taiwan’s exports is carried by air freight rather than by sea. Taiwan is the undisputed king of the integrated circuit, responsible for 63% of the global contract manufacture of microchips, with the lion’s share of that accounted for by a single company, TSMC, which is the major supplier to Apple, Intel, Qualcomm and Nvidia . Taiwan’s market share for high-value integrated circuits smaller than 10 nanometers is 92%.

Alongside its fabrication is an ecosystem of integrated circuit design, packaging and supplies such as silicon wafers. Taiwan’s total integrated circuit exports earn around US$140 billion a year, and it is also an important supplier of other high-technology and high-value equipment.

China is itself the destination for about half of Taiwan’s exports of integrated circuits. Taiwan-sourced chips are central to China’s exports of electronic goods.

Concern about the fate of Taiwan’s semiconductor industry in the wake of any conflict with China contributed to the US Senate approving a US$280 billion bill over the weekend to bolster its domestic chip manufacturing. Any companies taking up the generous grants on offer must commit not to upgrade their Chinese plants for a decade. TSMC has built a US$12 billion fabrication plant in Arizona in response to US concerns.

The firm’s chairman, Mark Liu, last week sought to refute the notion that China could gain control of its operations by seizing Taiwan by force. ‘Nobody can control TSMC by force. If you take a military force or invasion, you will render TSMC[’s] factory not operable,’ Liu said. ‘Because this is such a sophisticated manufacturing facility, it depends on real-time connection with the outside world, with Europe, with Japan, with [the] US, from materials to chemicals to spare parts to engineering software and diagnosis.’

Any sustained blockade of Taiwan would make the disruption to microchip supplies during the Covid-19 epidemic look trivial. An analysis of Taiwan’s microchip sector by the Hong Kong–based Hinrich Foundation notes that integrated circuits are now the fourth most widely traded category of goods, behind crude and refined oil and automobiles.

Taiwan is an important trading partner for Australia. It is its fifth largest export market after China, Japan, Korea and India, buying goods worth $16.2 billion last year, led by coal, iron ore, natural gas and other resources. Taiwan is Australia’s eighth largest source of imports, led by refined petroleum, mobile phones, computers and cigarettes. Lacking an indigenous electronics industry, Australia is only a small buyer of Taiwanese integrated circuits, but there’s significant Taiwanese content in Australia’s imports of motor vehicles, white goods and electronics from around the world.

The likelihood that any blockade would be contested implies that it would not only be Taiwanese trade that would be halted but the vast flow of resources into China’s northern ports and manufactured goods out.

As ASPI’s analysis of such an eventuality demonstrated, it would be the loss of access to Chinese manufactured goods that would be the greatest source of disruption for the Australian economy, whose construction, retail and manufacturing industries are heavily dependent on imports from China.

While the resource sector would be crippled, it is a relatively small employer and the loss of export revenue could be covered by financial markets, at least for a short period. Russia’s experience under Western sanctions has similarly shown that it is the loss of imports that is the greatest source of economic disruption, rather than the squeeze on exports. The global impact of the loss of trade through the Taiwan Strait would be incomparably greater than that flowing from Russia’s war in the Ukraine.