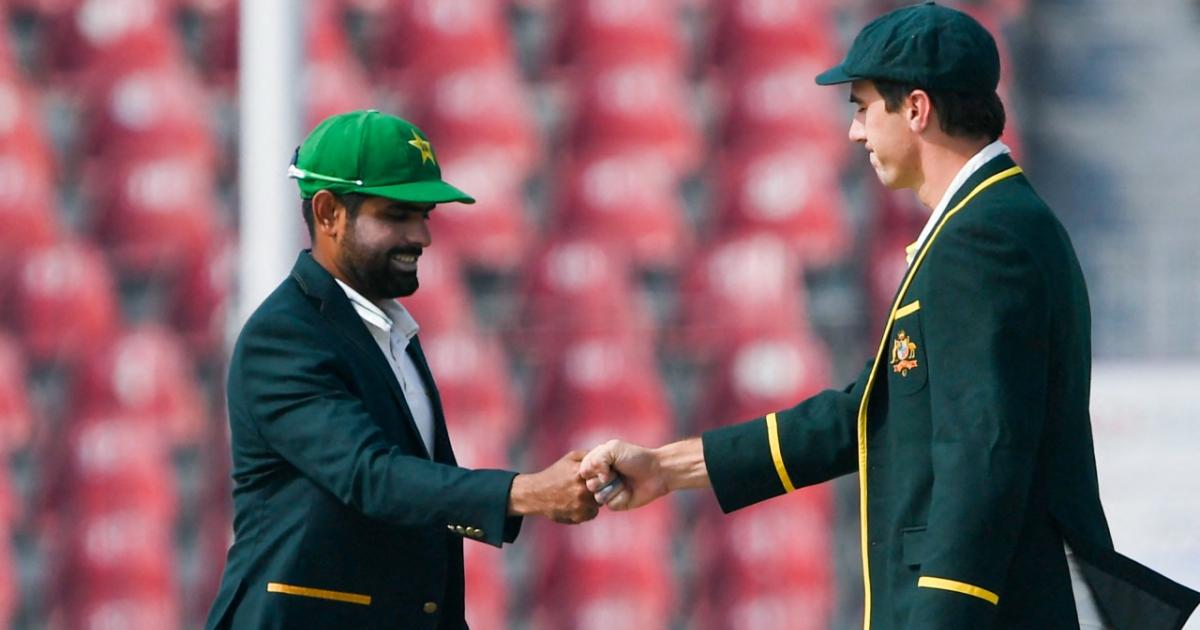 Much has been said of Australia returning to Pakistan for the first time in nearly 24 years.

International cricket, of course, has been filtering back here over the past three years.

But there have been no Tests in Lahore since the terrorist attack of 2009 that left eight people dead and brought international cricket to a halt in Pakistan.

The significance was not lost on those present as the sun burned hot through the morning haze; it has been hanging in the air for days, mentioned by almost every Lahore local you encounter.

It certainly would not have been lost on one of the standing umpires, Ahsan Raza, who was struck by two bullets during the attack at the nearby Liberty roundabout and was back to officiate this in this historic Test.

All those who came early crowded into the shady spots at the top of the stands, ready to celebrate their team, none of whom have played Test cricket at Gaddafi Stadium.

So what greeted them after a 13 year absence?

They were treated to early drama thanks to Shaheen Shah Afridi, who could qualify as an adopted local after his star turns for Lahore Qalandars that helping them secure their first PSL title at this ground only a few weeks ago.

Half the crowd chanted, “Sha-heen, Sha-heen”, while the other half went with, “A-fri-di, A-fri-di,” the combination mixing with the ever present horns and swirling into a cacophony of anticipation and celebration.

Shaheen, whose name is also the Urdu word for ‘eagle’, responded with the most incisive new ball spell the series has seen.

While large black kites soared above the stadium, the eagle struck below, twice in his second over.

He pinned David Warner LBW with a beauty that seamed back into the left-handed opener and then Marnus Labuchagne edged a ball that angled across straight into the gloriously bright green gloves of Mohammed Rizwan.

It was the most incisive new ball spell in the series to date but, as in the previous two Tests, it was only a matter of time before attritional cricket settled in.

Usman Khawaja and Steve Smith have been the stubborn steadiers for Australia and their partnership dragged the first innings advantage back towards the visitors.

There was entertainment in the attrition, particularly in the early battle between Shaheen and Smith.

To see Smith make technical adjustments within matches makes a fascinating study; in Karachi he opened his stance to combat reverse swing to the point where, in his own words, it almost resembled French cricket.

In Lahore, to combat the natural away movement of Shaheen, he exaggerated his trigger movement towards his off stump, opening up the off side.

There are few batters who can make such changes within a game and the ticking of his brain could almost be heard above the pounding of his bat on the crease, which became more pronounced with each Shaheen run up; as if by whacking the ground harder he could impart extra energy into his bat.

He was easily distracted, even by his own fidgety standards; twice the broadcaster’s buggy camera drew his ire as he channeled Stuart Broad, just stopping short of shouting, “Stop moving the robot!” The sense of theater was brought further to life as Shaheen and Rizwan pumped up the crowd, who were only to happy to oblige by pumping up their own volume.

Even the Pakistan flag flying to the left of the sight screen was fluttering too close to his eyeline, leading to the bizarre sight of the fourth umpire clambering across the lower stand roof to remove the flag, which was only raised again once Smith was dismissed.

His departure came at the hands of Naseem Shah, who justified his recall to the side in place of Faheem Ashraf by being Pakistan’s best bowler of the day, with his extra pace and canny reverse keeping Australia in check and prising out the wicket of Smith seemingly out of nowhere; a cracking delivery that nipped back in sharply and stayed low to rap the pads of Smith as he tried to play across the line.

But it is Khawaja who has been the most elegant and stubborn thorn in and for this Pakistan side, and now it was the Lahore fans who followed on from those in Rawalpindi and Karachi in their appreciation of this son of two countries; Of all the Australians, Khawaja will have the deepest appreciation of what it means to have Test cricket back in Lahore.

His dismissal came, quite literally at the hands of Lahore’s most popular cricketer of the modern age.

Babar Azam has never been lauded sufficiently outside of his homeland in the eyes of many Pakistan fans; the question of whether he belongs in the fabled – and completely arbitrary – so called Big Four has been regularly posed to traveling media.

But as the light turned golden and the shadowed lengthened across the Gaddafi Stadium grass it was Babar’s prowess in the slips rather than with the bat, that brought the greatest joy to the fans, who had filtered down to the lower seats in the cooler late afternoon air.

Pakistan had already dropped several catches on the first day, including a sharp chance off Khawaja when he was on 12. It was Babar who hadn’t been able to get quite low enough on that occasion, but he denied Khawaja a second century of the series with a superb effort late in the day.

The Sajid Khan delivery was full and turned sharply, drawing a thick edge as Khawaja tried to turn the ball to the leg side. Babar dived to his right and snatched the ball, before his elbow thudded into the ground. Such was his relief, he refused to let it go, clutching it tightly as he lay on the ground and was swamped by his teammates.

When the umpires called stumps, half of Australia’s batting line up were back in the sheds and the scales were tipped slightly in Pakistan’s favor.

There are modest signs this pitch may have a few more tricks than those in Pindi and Karachi and these are two teams desperate for a victory that will secure the series.

But, however the remaining days play out, there is a satisfying and poignant warmth in the knowledge that Test cricket has returned to Lahore; there could not be a more fitting stage for the finale of the Benaud-Qadir Trophy.