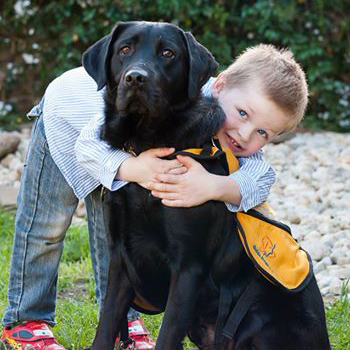 A new Australian study looking at the impact of an autism assistance dog for children and their parents has made an unexpected discovery: the dog has expanded their world, literally.

The presence of a specially trained therapy dog ​​for autistic children is giving families the confidence to venture further afield and to many more locations, according to researchers from the University of South Australia.

UniSA researcher and qualified occupational therapist Dr Shelley Wright, who supervised the study, says the freedom to explore new places is something most of us take for granted, but for children with autism and their parents, this is normally fraught with sensory challenges.

“Impulsive and unpredictable behavior is a feature of autism and taking children out of their usual environment is often too stressful for both child and parent,” Dr Wright says.

Honors student Rebecca Appleby conducted interviews with eight families paired with an autism assistance dog (AAD) as a support for their child.

“In summary, many parents were not sure how they managed without the dog,” Dr Wright says.

“The parents we interviewed were much happier and more at ease leaving their home with their child after getting an autism assistance dog.

“A new finding from this study was the sense of freedom and peace of mind stemming from the dog sleeping with the child, improving sleep for the family as a whole and alerting the parents when the child woke up and, in one case, was having a seizure. ”

The only frustration reported by parents was a lack of public understanding about access rights in relation to an assistance dog, with some places not understanding the law and refusing them entry.

Mt Gambier resident Chantel King, whose 13-year-old son James is autistic, vouches for the positive impact of Winter, a black Labrador who was assigned to the family in 2011.

“James was just a baby when we got Winter but the difference that he has made over the years has been breathtaking,” Chantel says. “We were able to go on outings as a whole family, rather than being split up and someone having to stay home to watch James. James was given a whole new world of freedom he had never had access to before, thanks to Winter. ”

Now retired from full time assistance dog duties, Winter is no longer legally able to accompany James in indoor settings, but he has more than fulfilled his role.

“Over the past 10 years Winter has expanded James’ world in countless ways, including giving him the confidence to perform in an eisteddfod, graduate in front of his peers, travel interstate and venture into public places. He has transformed our lives as a family, ”Chantel says.

“Australian parents’ experiences of owning an autism assistance dog” is published in Health and Social Care. For a copy of the paper, email candy.gibson@unisa.edu.au.

Other authors include Rebecca Appleby, Lindy Williams and Mandy Stanley, Honors student and staff from the Allied Health and Human Performance unit at the University of South Australia.

Chantel King was one of the study participants. She is available for interview about the positive impacts of an autism assistance dog for her son. To arrange this, and for photographs of James and Winter, please email candy.gibson@unisa.edu.au