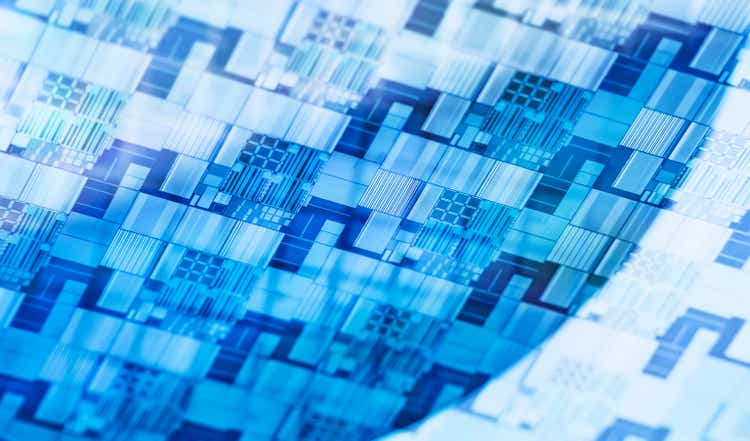 Axcelis Technologies (ACLS) released a new Form 10-K last week, giving everyone a chance to take a closer look at ACLS in a way that can only be done once every year. Numbers-wise, ACLS is in good shape. In fact, FY2021 was an exceptional year with many new record highs. However, while business is doing well, headwinds are coming in from other angles. The stock has stalled after an extended run-up in spite of the good numbers. It could even open the door for a change in direction. Why will be covered next.

ACLS closed FY2021 on a high in more ways than one

FY2021 was a very good year for ACLS as it broke numerous records during the year. Revenue, gross margin and operating profit reached record highs. FY2021 revenue increased by 39.6% YoY to $ 662.4M. Not only is this a new all-time high, but ACLS managed to hit its target of $ 650M in annual revenue two years earlier than expected. In FY2022, ACLS expects quarterly revenue to reach a run rate that would put it on track to hit the next target of $ 850M in annual revenue.

Guidance did not extend beyond Q1, but management did add some color as to the rest of FY2022. FY2022 is expected to be another great year, although there are risk factors out there that could throw things off. From the Q4 earnings call:

“We expect 2022 to be another great year for Axcelis. End markets are strong, and visibility into 2022 and early 2023 is very good. But like others in the industry, the headwinds that we experienced in 2021 are continuing to provide challenges. We have built anticipated costs and supply chain constraints into our Q1 guidance, but things are changing almost daily. Our operations and engineering teams remain engaged in activities to meet our customer requirements for systems and support. ”

A transcript of the Q4 FY2021 earnings call can be found here.

The stock pauses after soaring higher

Quarterly numbers were not the only thing that got better as the year went by in FY2021. The stock did its part by ending on a high in 2021. ACLS got off to a slow start in FY2021, but the stock took off in the second half to end the year up an impressive 156%, reaching levels it has not seen in over a decade. It’s worth noting that as late as the middle of July 2021, the stock was up only 18%. The stock was weighed down in the first half of the year by uncertainty due to trade restrictions imposed by the US government and what it could mean for ACLS. A previous article covers this issue in greater detail.

The stock jumped higher in the second half of 2021 after ACLS got some clarity from the US government, but the year 2022 is shaping up to be something else. The stock is currently down 17% YTD. On the other hand, there are positives to be found if a stock pulls back. The decline in the stock combined with better-than-expected earnings have brought down valuations. The table below shows the multiples for ACLS. For instance, ACLS trades at 15 times forward earnings with a trailing P / E of 21. Keep in mind that these multiples are for a stock that jumped 156% in 2021.

Why ACLS has struggled in 2022

ACLS is not alone in struggling. Tech as a whole is down, including semis. ACLS and many other semis continue to post record numbers and the outlook remains strong, but other factors have popped up to take down the stock, overshadowing all else.

The first has to do with the Federal Reserve changing course in terms of its policy. Tech stocks have been one of the biggest beneficiaries of the stimulus from the Fed, but the Fed now intends to tighten due to spiking inflation. The market has responded by shifting towards other sectors that are likely to benefit from higher interest rates, to the detriment of tech.

Another factor has been geopolitical tensions, especially in recent days. War in Ukraine has set off a chain of events that creates a lot of uncertainty for the global economy and stocks as a whole. Whether it’s a wider war, inflation running amok, debt defaults, there’s a lot out there that is weighing on stocks, including ACLS.

There’s another thing worth watching. The chart below shows how the stock has painted what appears to be a symmetrical triangle. There are two trendlines, one formed by a series of lower highs and another one by a series of higher lows. The two trendlines are converging on one another at roughly the same slope.

The symmetrical triangle is indicative of a stock on hold, waiting for direction. The stock seems to be consolidating before making its next move, which could be a breakout above the upper trendline or a breakdown below the lower trendline. Both can happen, but the former tends to occur more often in a symmetrical triangle. If it’s the latter, the uptrend that has been in place since the middle of July would come to an end.

ACLS ended FY2021 on a high note in terms of growth, but that was true also of the stock. The stock capped 2021 off with a powerful rally that saw it appreciate by 156% for the year. However, the rally has stalled in 2022. Earnings growth is strong and valuations are not excessive, but other factors have popped up to give the stock a hard time.

Semis have greatly benefited from all the liquidity provided by the Fed to combat COVID-19. But if one believes that Fed policy helped push stocks higher, then it stands to reason that a reversal in policy will accomplish the opposite, which is to push stock lower. The Fed has no choice but to tighten to lower inflation. What is not known is how much the Fed needs to tighten and how fast to bring inflation to more reasonable levels. If the answer turns out to be a whole lot like in the early eighties, then that doesn’t bode well for stocks. This uncertainty is weighing on stocks, including ACLS.

Geopolitical problems have become another headwind, especially recently. Not only is there the possibility of a wider conflict in Europe, but it has also increased inflationary pressure, which was already a problem. It has also aggravated the threat of supply chain disruptions with Russia and the Ukraine important suppliers of semiconductor materials, which could affect quarterly earnings of relevant companies due to a domino effect. All the uncertainty is not conducive for stocks to do well.

The stock appears to be in a symmetrical triangle based on the recent price action. ACLS is stuck in a tug-of-war between two opposing forces. The stock is nearing a crossroads. It could continue to go in the direction it’s been going for the last few months or it could go in another direction. On the one hand, you have the aforementioned headwinds that are weighing on the stock. Both have the potential to bring down stocks since no one can be sure what they will lead to.

On the other hand, the sellers are being offset by buyers that still like ACLS with its strong earnings growth prospects and fair valuations. It’s also worth pointing out that while a move lower is possible with a symmetrical triangle, the odds favor a move higher. The uptrend that has been in place since the middle of 2021 remains in force, which suggests staying long is the way to go as long as this remains the case. One could even argue that with ACLS having the fundamentals, valuations and charts on its side, the stock is more likely to go higher than lower.

While a continued rise in the stock is more likely, I am nevertheless neutral on ACLS for reasons mentioned before in a previous article. The stock could head in either direction. Anyone betting on either direction runs the risk of substantial losses, especially in today’s environment with stocks making big moves and high volatility. When no move is clearly better than the other, the best move is not to make a move at all.