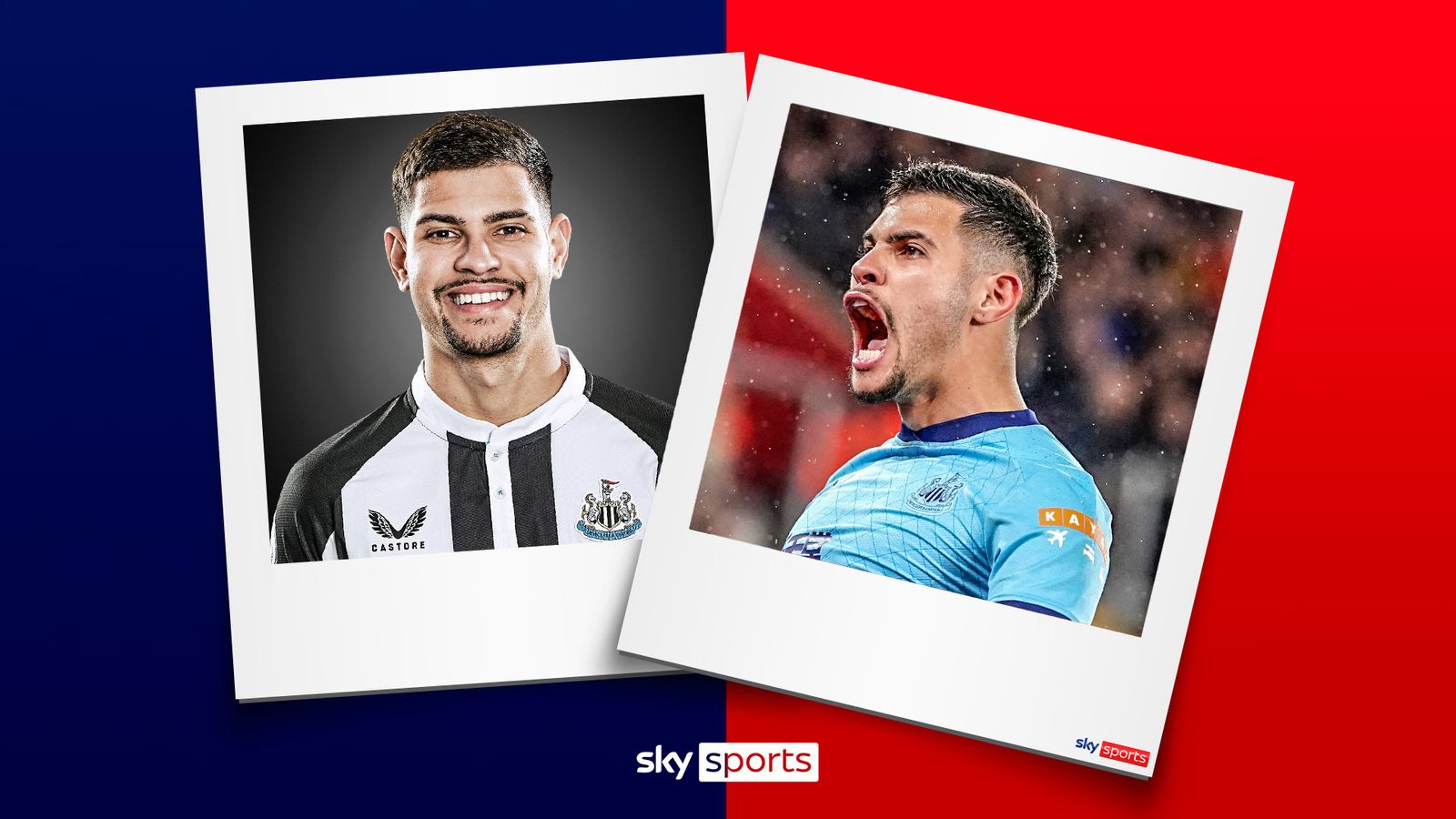 It’s a good job that Newcastle have yet to suffer defeat since Bruno Guimaraes joined the club in the January transfer window.

“I don’t like losing,” Guimaraes tells Sky Sports ahead of their Super Sunday clash with Chelsea. “The next two days after a defeat are really hard on me. When I lose, I’m just praying for the next matchday to come around in the hope that we can win and banish those feelings.”

Being down after a match is a feeling that the Magpies’ record signing is used to. During his younger years in Sao Paulo, the Brazilian felt the wrath of his overbearing father – a taxi driver by trade – from the sidelines.

Now he’s the toast of the town in Newcastle, especially after his sumptuous backheel flick against Southampton on Thursdayhis father has eased the pressure on him – but the £ 40m midfielder still goes over his most recent match with both his parents.

Bruno Guimaraes marked his first Newcastle start with a stunning backheel flick as the Magpies beat Southampton 2-1 at St. Mary’s. Watch all the best angles here.

“When I was a kid, it was quite hard back then as my dad would speak to me quite a lot and give me a lot of criticism,” he recalls. “It was quite negative, but now I’m professional there’s a lot of praise. We do speak a lot but it’s a lot more positive – with constructive criticism!”

The self-discipline of the 24-year-old learned during his younger years has had an effect on him today. At Lyon, he learned French fluently in just six months, impressing many at the Ligue 1 club. In his chat with Sky Sportsthe midfielder comes across as polite, well-grounded and eager to show his new fanbase how his English is coming along.

Dodging the help of his translator as soon as the topic of the Newcastle supporters comes up, he says: “Since I’ve arrived, it’s been incredible and I’m so happy to be here. I’m anxious to play more.

“The fans here are really incredible, I’m very lucky. When I walk down the street, I take pictures with the fans and I’ve spoken with them a little. It’s very important for me to do this.”

Those Magpies fans can be assured that Guimaraes will stick to the back-page headlines he currently occupies after his heroics at Southampton, rather than the dreaded ones at the front.

“I don’t really like to drink alcohol, I don’t really go out,” he says, returning to Portuguese. “I like to spend a lot of time with my girlfriend, my parents and my dogs – playing video games too plus catching up with friends.

“I’m really focused on what I want to do, plus I want to be the best I can.”

Becoming the best is clearly the goal of Guimaraes and his new club, who have both entered new chapters this season. The Brazilian is the club’s most expensive purchase since it was taken over by their new Saudi-led owners at the back end of last year, but his rise to becoming Newcastle’s matchwinner has taken some time.

Thursday night’s win at Southampton was Guimaraes’ first start for his new club and it was worth the wait, with the Brazilian’s sublime backheel goal sealing all three points on the south coast.

It was a goal that belonged in the Champions League, the Guimaraes stage is aiming to reach with Newcastle.

“If a club has a project and wants to aspire to the maximum, then it’s going to involve winning the Champions League,” he says. “It’s the biggest club competition in the world and obviously we’re keen on winning the Premier League as well.

Newcastle were in the relegation zone when Guimaraes completed his club-record move just before Transfer Deadline Day. At the time, eyebrows were raised that a player who played in a Champions League semi-final for Lyon just 18 months before would risk relegation to the Championship during his prime years.

There were higher-caliber teams than Newcastle after the 24-year-old too. Sky Sports News revealed in January that Arsenal were interested in the midfielder, while Guimaraes was also watched by Manchester United and Paris Saint-Germain. 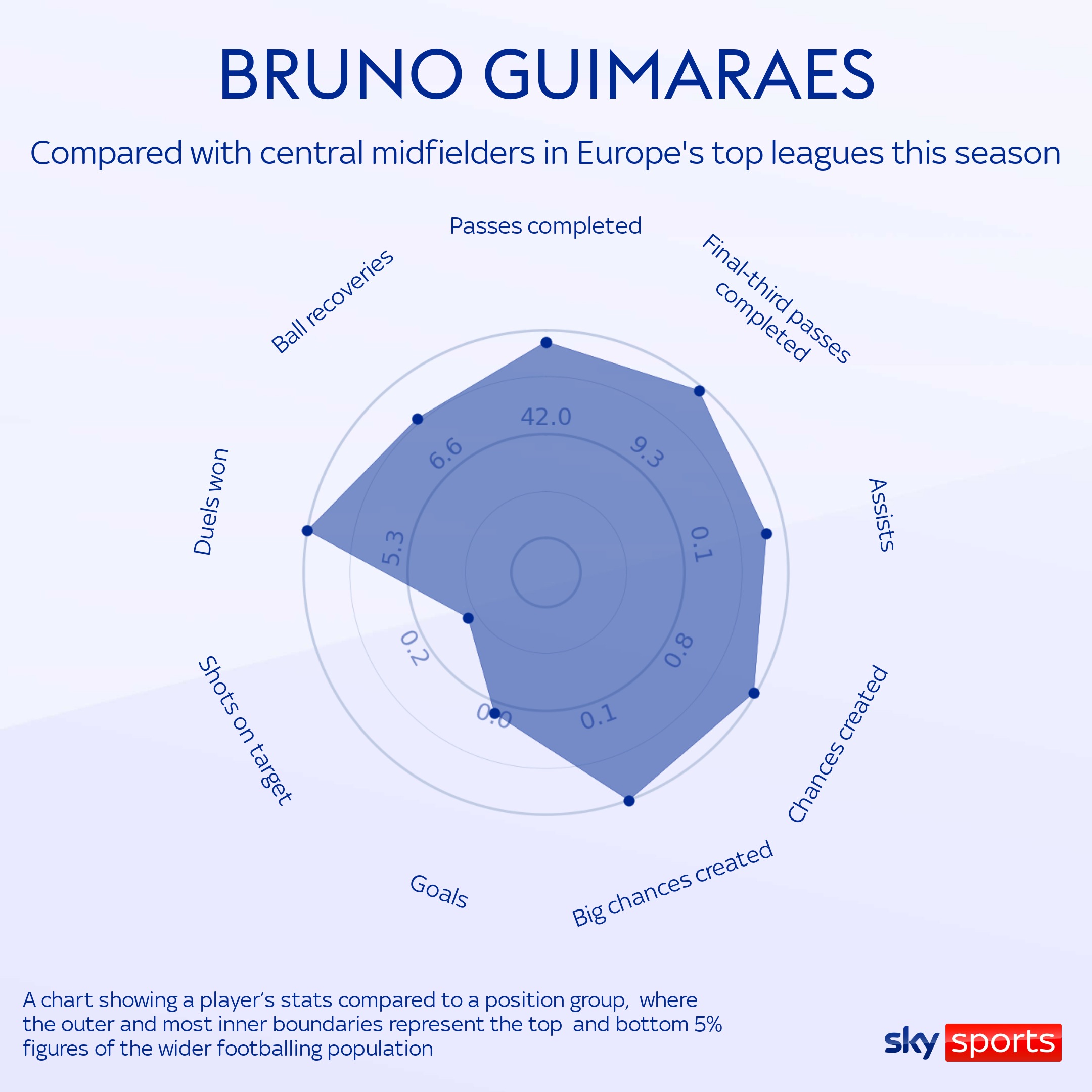 When the 24-year-old sealed his move to Newcastle, he posted an arrival video teasing those Arsenal talks – but he now says the Magpies’ ambition was too good to turn down.

“I did speak to some other clubs,” he reveals when asked about the Arsenal interest. “But the only concrete offer came in from Newcastle and I really wanted to come here. I’ve always wanted to play in the Premier League and on top of that it was the start of a new sporting project for the club.”

After Thursday’s win at Southampton, Newcastle are well clear of the drop zone – they are actually closer to the top-half than the relegation places. And now the talk surrounds how far this team can rise. But there’s one English phrase the Brazilian has picked up during his short time on these shores: game-by-game.

When asked on his views on Magpies boss Howe, he ushers in English: “I like him, he’s very smart. He thinks game-by-game. I’m very happy with him and I think I can help the team and the coach . “

Newcastle’s next clash against Chelsea will test their unbeaten run with the Brazilian in their team – and good luck to anyone in Guimaraes’ way if they lose.