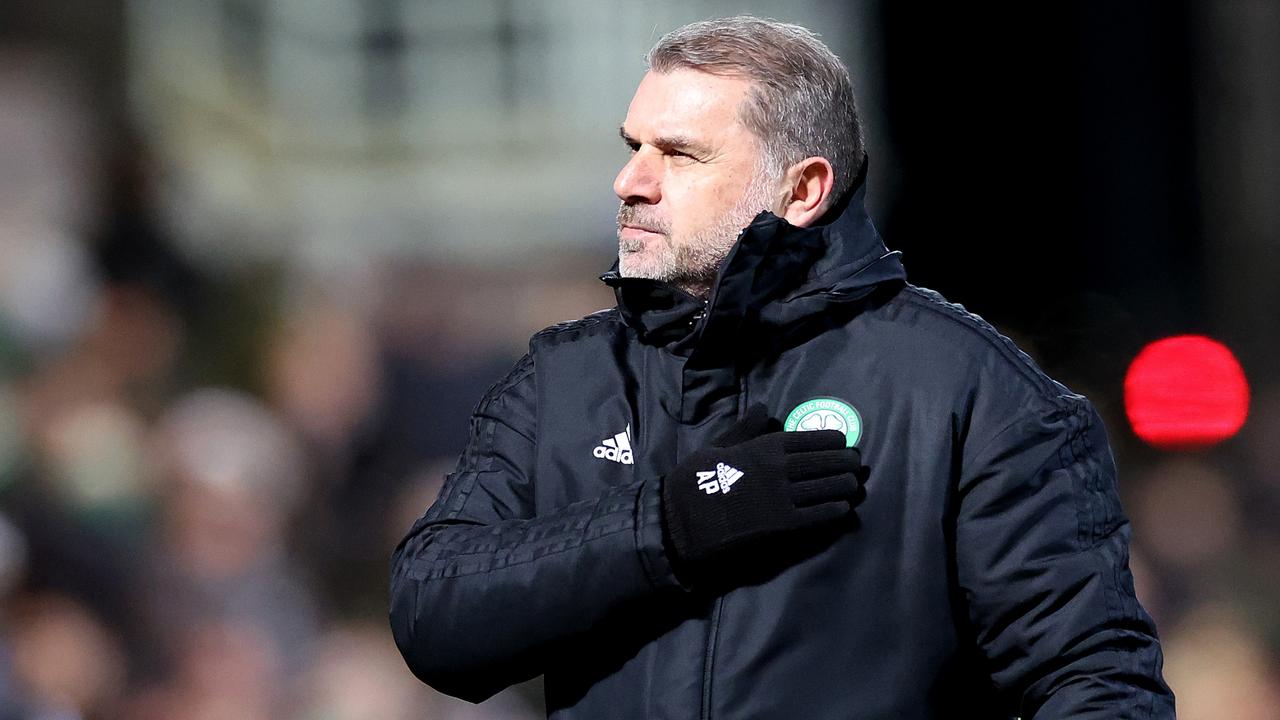 A victory that ended Rangers’ two-year domestic unbeaten run at Ibrox and Celtic’s even longer wait for three points on enemy soil.

A victory that extended Celtic’s lead at the top of the Scottish Premiership to six points with only six games to play along with a pretty handy goal difference advantage.

A victory that has, for many people, ended the title race.

But for Hoops boss Ange Postecoglou, it’s quite simple.

“It’s three points, mate,” Postecoglou said after Celtic’s 2-1 victory over Rangers, their second in a row over their arch rivals.

The fixture began with a less-than-ideal start for Celtic, as Rangers took the lead after just two minutes and 16 seconds thanks to star midfielder Aaron Ramsey.

But up stepped the aptly-dubbed ‘Wizard of Oz’, Tom Rogic, to return serve.

In the Bhoys’ first real foray into the final third, a ball across the box fell to Reo Hatate who had his effort thwarted by Rangers gloveman Allan McGregor.

Rogic was in the right place at the right time to make sure McGregor wouldn’t keep out his strike, leveling the scores in the seventh minute.

Then it was time for one half of the meanest center-back pairings in the league to step up, as Cameron Carter-Vickers put Celtic in the lead just before halftime in what would ultimately prove to be the winning goal.

‘Everything is against us’: PL giant one step closer to disaster as former manager twists the knife

It was a relentless contest that had all the hallmarks of what constitutes a Postecoglou team: relentless energy, rapid bursts forward in attack and that never-say-die attitude.

Those prophetic words rank true in the derby, as green and white shirts transformed into 11 Energizer bunnies with their willingness to run until the final whistle.

Players from both sides fell to the turf in an instant after referee Willie Collum blew the final whistle.

But the emotions etched on the faces of the players could not have painted a different story.

The Times’ Paul Forsyth noted that for those in blue shirts, they wouldn’t have minded if the ground they were lying on opened up beneath and swallowed them whole.

“It feels like an awful long way back for the defending champions, who will now nurse the psychological scars of this bruising defeat, their first at home in the league for two years,” Forsyth said.

“The lift they need between now and the end of the season is one that even matchday guest Tom Stoltman, the world’s strongest man, would struggle to pull off.”

If one was to conjure up such an image as what was painted upon full-time at Ibrox this time last year, they probably would have been locked up in a mental asylum with the key thrown away into a furnace.

Rangers put an end to Celtic’s famous quest for ten in a row by romping to the title with an emphatic 25 points separating the two famous clubs.

Postecoglou was tasked in the summer with reversing the club’s fortunes, but you’d had been hard pressed to find anyone in Scotland who had even heard of him, let alone be convinced he would be up to the task.

Oh, if only they knew what was to come.

In fact, some fans pointed out the notable similarities between Postecoglou and another famous Celtic manager by the name of Martin O’Neill.

It was also noted by Celtic legend Chris Sutton.

“I think there are big similarities between Martin O’Neill and Ange Postecoglou,” Sutton told BBC 5 Live.

“When Martin O’Neill came in, the points deficit was 21 points in the previous season behind a really good Rangers team.

“It’s a really good Rangers team this season and the deficit was 25 points.

“For Celtic to be in this position, it is all down to Ange Postecoglou and his recruitment.

“I think that is remarkable.

“Celtic are in the driver’s seat.

“Even if Celtic didn’t win it from here, which it looks like they will now, then he’s still done an incredible job.”

Sutton even pointed out how Postecoglou turned things around after a rocky start.

Well, a rocky start to those outside the Celtic walls.

“He was trying to build a team.

“Celtic got knocked out of the Champions League and had to play a team of kids.

“To be in this position against a formidable Rangers line-up, I think he’s been absolutely outstanding.”

Sutton mentions the idea of ​​Celtic not winning the title from this position, but it seems almost improbable that they’d collapse given the club is unbeaten in its last 32 domestic fixtures.

No matter how many memorable quips are uttered by Postecoglou to downplay the magnitude of victories or the possibilities linked to them, it does little to quell the celebrations.

Even on the blue side of Glasgow, it seems that they’ve conceded the trophy to their arch rivals.

Chris Boyd, a veteran of over 150 games for Rangers, knows it’s just about done and dusted.

“There’s no doubt about it.

“Celtic, with that form, we’ve seen how good they are going forward in recent games, we’ve seen another side in terms of defending properly.

“For me, I thought it was going to be very difficult for Rangers to get back into the title race anyway.