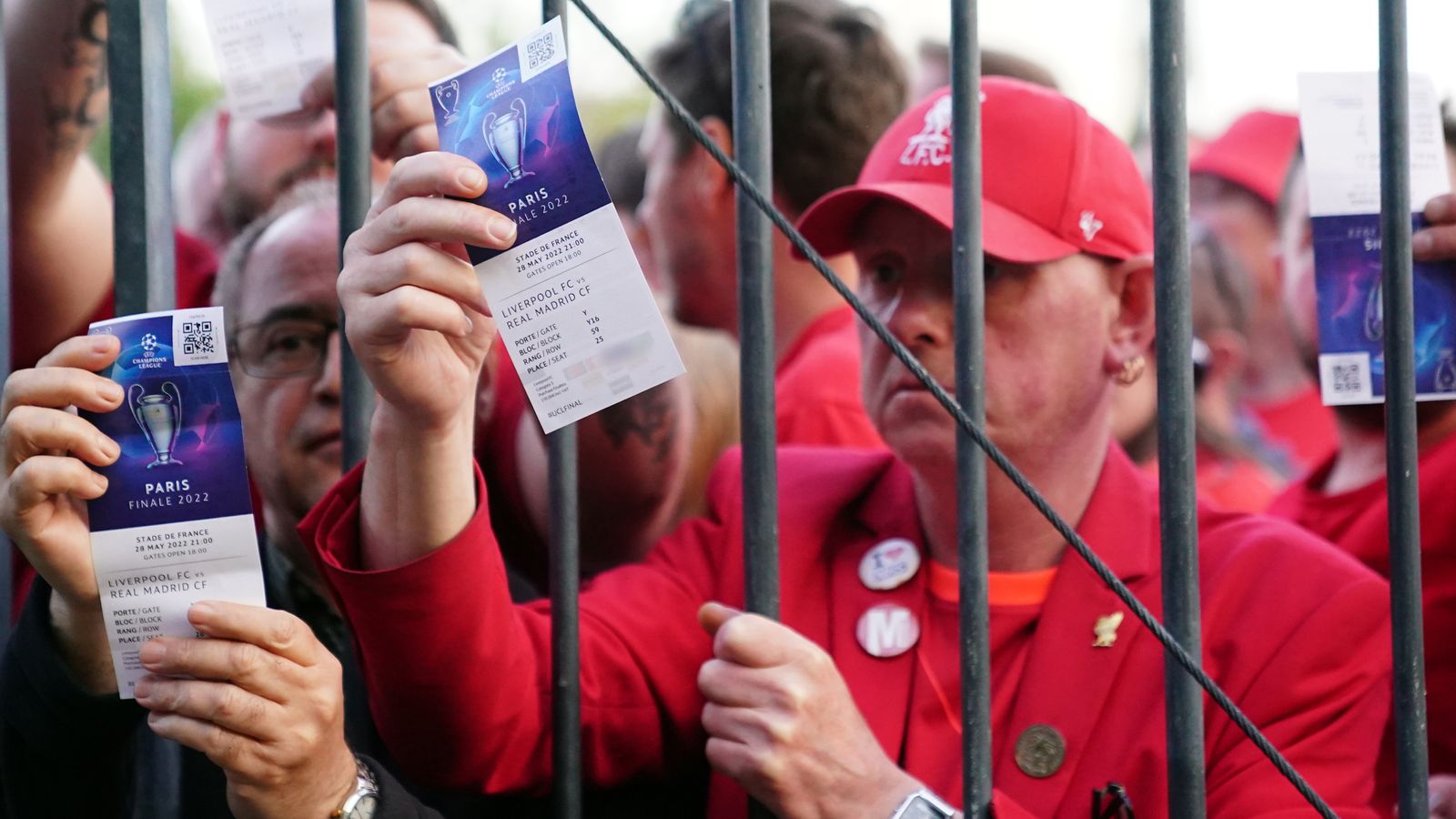 There were chaotic scenes ahead of Saturday’s Champions League final, with long queues to enter the Stade de France, people seen breaching fences, reports of robbery and pickpocketing by locals and police using tear gas on supporters.

While UEFA has blamed “thousands of fans with fake tickets” for causing the delays, Liverpool have called for a formal investigation into the events, citing “unacceptable issues” for supporters. Culture secretary Nadine Dorries and Liverpool West Derby MP Ian Byrne, who attend the game, have also called for investigations.

Here, Sky Sports News reporters and Liverpool fans who were there give their accounts of the disturbing circumstances ahead of Real Madrid’s win over Liverpool…

“Absolutely terrifying night. Scary scenes down at the turnstiles as people were crushed at barriers. Young French individuals were storming the gates causing chaos with police. First time I’ve ever felt my life was in danger at a match.”

‘I was tear-gassed and almost robbed’

“I’m a bit shaken up after it all. On our way out we were tear-gassed, someone tried to pickpocket me and someone also tried to nick my watch. I had to physically hit them off my arm and trap their hand in a metro gate to get away. Real Madrid fans were also getting robbed as well as Liverpool fans. “

Myself and my wife turned up an hour and a half before the kick-off, which in any other event is early! We queued for nearly two hours and during that time we were tear gassed and squashed in a small space. It was a very scary experience. I’d never go away in France again.

‘We were robbed twice’

“Before the game we entered the stadium with no problems. After the game me and my partner were robbed twice walking across the canal bridge. Phone, bank cards and ID gone. Whole experience was awful. First and last time in Paris for us. “

“Organized gangs robbed us of our watches! They targeted the elderly and picked people off on our way to the Stade de France Metro station. Been going to Europe for 25 years and never witnessed anything like it.”

“I think the problem [the French police] had last night was not with Liverpool or Madrid supporters but with local French youths who were trying to get into the ground. It was very, very noticeable. All round the stadium there were hundreds of young French men hanging around, fighting with the police, involved in running battles with the riot police. I did not see any Real Madrid or Liverpool supporters involved in any of that trouble whatsoever.

“I saw the police stopping them getting near the ground. The walkway that those 20,000 Liverpool supporters had to walk up is not fit for purpose. It was just too small and then incredibly, the police had decided to park three or four police vans across So Liverpool supporters only had a tiny gap to get through, and once they’ve queued for something like two hours to get through that tiny gap and get onto the competition of the stadium, then they were just standing there and doing nothing because the gates that they were supposed to use to get into the ground kept opening and closing and the process for fans to get inside the stadium was so slow so.

“There were local French boys trying to climb the fences to get in the stadium and that led to the French riot police using tear gas indiscriminately and they were using pepper spray indiscriminately as well. We were caught up in that. We just happened to be in the wrong place at the wrong time. It really wasn’t a nice experience at all. “

‘Fans were begging the police for help. The police responded by tear-gassing fans’

“I was reporting on the build up of fans arriving into the stadium, the turnstiles just being opened and the mood was very joyous. Real Madrid and Liverpool fans were mingling, singing songs together, taking pictures. Jovial scenes and fitting for a European cup final.

“I went into the media area but then started to get messages from Liverpool fans I know saying ‘it’s quite dangerous outside.’ Our cameraman went and got a lot of footage. It was such poor crowd management and organization.

“The fact there were no pre-ticket checks meant locals were joining this mass and had been pickpocketing fans, trying to pull off tickets and aggressively take pictures of QR codes.

“I spoke to the police and they said there were issues with locals trying to gain entry into the stadium. However the footage of our cameraman got is of ordinary fans, children, women begging the police for help because they were among these local guys who were being antagonistic and forceful.The police responded by tear-gassing fans.

“You could sense the Liverpool fans inside the stadium were very preoccupied about what was happening outside, there was no atmosphere, it was so flat, there was no celebratory mood. I know a lot of club staff who had tickets and couldn’t get in and these were tickets they got from Liverpool.Andy Robertson’s friend couldn’t get in with a ticket from the player himself.

“The reaction to the flawed strategy was to be antagonistic rather than to pivot and relieve any of the pressure and chaos that was happening.”

“When we arrived at the stadium, just over an hour before the kick-off, it was utter chaos.

“The top of the stairway we would normally use to access the outer concourse to take us round past the TV compound was blocked off by security barriers. The stairway was full of frustrated fans who weren’t being given any direction as to how they could access the turnstiles, given there was no way through what would normally be an access point.With the build-up of people on the steps, it was a situation that was far from safe.

“As we walked round to find a way onto the outer concourse, the remnants of the tear gas in the air began to sting the nostrils and make the eyes water, while fans at the roadside were suffering far worse, dealing with the full effects of breathing in the fumes.

“At this point, as we neared another set of security barriers, a bottleneck had been created with fans being corralled into a narrow gap for ticket checks to be made. It was not a comfortable experience with the weight of people behind you and again a There was no need to create such a bottleneck in what was a wide street.

“Thinking it would get better once past the barriers, we saw locals hopping over barriers and running away from police and stadium security, along with chaos at the turnstiles with fans caught in tight conditions and entry either being denied or entry gates just shut down.

“Subsequently, we found out one of the fans whose ticket was deemed fake was one of Andy Robertson’s party. Given the ticket was supplied through Liverpool, clearly it was the genuine article.

“I had a friend and his teenage son stuck outside for over two hours, not able to comprehend why they came so close to missing a game they were so excited about when they got their tickets in the ballot.

“I saw former players in the media area scared for the safety of their loved ones caught up outside in the problems at the turnstiles as well as the heavy-handed tactics of the police.

“I’ve had messages from a serving police officer saying they were just thankful no one was seriously hurt.

“At no point did I see misbehavior from the fans. There was anger at the way they were being treated but that didn’t turn to trouble.

“Instead, tear gas was deployed to solve a problem that was of the authorities’ own making.

“Poor organization was the major factor behind the issues at the Stade de France and the fans have experienced just how worrying a situation that can create. Now they deserve answers and action because this is not what UEFA’s showpiece event should be about.”

Were you there? Share your experience with us in our reaction blog