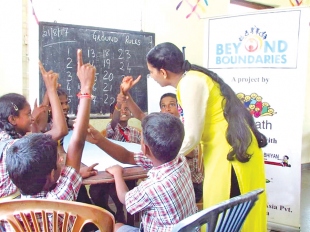 The two years of COVID-19 pandemic followed by agonizingly long closure of schools have affected the mental health of children across the country. The worst hit are the intellectually challenged children whose development got stagnated. Speaking to experts in Goa, SHASHWAT GUPTA RAY found that it would take a herculean task for the special educators to undo the damage caused by the lockdown to these children.

It has been two years now since the Government of India arbitrarily declared a nation-wide lockdown, which was supposed to be initially for 21 days. But the COVID cases continued to mount and lockdown continued. First in 2020 then again in 2021, the COVID pandemic continued to wreak havoc.

With the cases receding gradually, all other institutions started opening up, except the schools. The children continued to remain home-bound, struggling to cope with online education and parents from humble backgrounds found it extremely difficult to provide the expensive smart phones for the education of their children.

While the mental health of children at large has been hit, the worst affected were the intellectually challenged children who have Autism Spectrum Disorder, Down Syndrome, Attention-Deficit / Hyperactivity Disorder and several others. These children are heavily dependent on personal intervention by the therapists and special educators for their continuous progress.

However, the unscientific and arbitrarily imposed lockdown resulted in prolonged closure of schools. These children were deprived of personal attention from their educators and therapists, online education notwithstanding. Their learning abilities have taken a huge hit. The efforts of special educators have gone down the drain and now they have to start from scratch.

Laxman Naik, a special educator attached with two leading schools of Goa, who works on these special children in school as well as in slums of Mapusa, said that these differently abled children were badly hit during the lockdown of schools.

“We all have a particular routine to follow during the day. If there is a slight disruption in the schedule, the whole day goes haywire. Similarly, children with autism have a particular routine. Earlier before COVID, they were going to school and had to complete certain tasks given to them by their teachers. They used to come back to school and do their home tasks. But all of a sudden, their lives came to a standstill. They could not fathom what was happening. Parents had no idea on what to do and the routine of these learners completely changed, ”Naik said.

Due to the lockdown, instead of going to school, they were found sitting on the home couch, watching television, eating snacks and going to sleep. Now after two years when these kids have returned to their schools, they are not allowing their teachers to teach them because they are stuck in that earlier routine of two long years.

“At school these children are showing a lot of behavioral changes. They are throwing tantrums, sometimes even getting violent because their routine has again changed suddenly. They are unable to understand the sudden changes. Online education has not helped them much. It has worked for them only when the parents or caregivers have taken the initiative. Now after the pandemic, the teachers are finding it very difficult to bring these students back on track in the class, ”he said.

According to the special educator, the progress of these students has been pegged back by at least two stages.

“There is this child whose age is around 16 years. But his IQ level was that of a Std 5 student before lockdown. Now after two years gap, the IQ level has receded to level of Grade 2. It is really sad to see the students who had learnt to read a full text, are now being taught alphabets. From teaching multiplication at one time, we have to now teach numbers, ”he said.

Liane da Gama, Project Coordinator at Atmavishwas – The Vocational Center, Verna and caregiver for her brother Savio da Gama, who has Down syndrome, said the last two years of the pandemic and the subsequent lockdowns and closures have impacted quite severely the development of children with special needs.

“The most impacted area for these special children has been in social skill development. Academics and associated learning can happen remotely, but how can you teach a child to socialize being at home all day and through a computer screen? For the young adults with disabilities, the challenges were different as skill development could still be taught online, but they needed a strong support system from the family, ”Liane said.

However, because of the varied disabilities and the different levels of challenges, it is difficult to generalize the impact of the school closure.

“As a caregiver, an educator as well as a sibling to a person with intellectual disability, to me the most challenging issue was to keep my brother meaningfully occupied so that screen time does not become the focus of the day.But this brought about skill training of a different type where he began to become more independent at home skills, cooking and explored more in the arts. Of course, he missed socializing with his friends and the ability to go out, ”she said.

On the effectiveness of online education on special children, Liane said, “I work with adults and because we moved to the online mode of teaching / learning right from June2020, I do not feel they were impacted very much or regressed. In fact, it seems in some way they gained a lot because parents learnt how to work with their wards and participated wholly in the learning process. ”

On the long-term impact, she said, “They have to learn again to be out in society and deal with all the challenges of society. Some of them may struggle with getting into a focused routine again. In my humble opinion the children and young adults in special schools and vocational centers have to be welcomed back with love and allowed the freedom and space to find themselves again in a social situation. ”

According to her, the new academic year might look completely different from the previous years, but it should be prepared creatively and with a people first motto so that all the difficulties of the time during school closure can be overcome.

Manager, Disha School for Special children, Panjim, Sandhya Kalokhe said that the impact has been twice more than anticipated.

“Though we were helping with virtual classes, visuals and other study material the parents and caregivers were clearly struggling with the kids to put them through the grind. These kids need one-to-one handling. Thank God the schools have been reopened now. Although it has been done at the fag-end of the academic year, the two months have given us time to assess these children’s shortcomings. This I am sure will help us plan our activities for the new academic year even better, ”Kalokhe said.

In these two years, many children did not have any socializing. This has impacted their mental health.

“Many are showing signs of depression. Initially the children could not go out due to the lockdown. Then in cases where both parents are working, they have not been able to take their children out and get them to play with others. Along with this, there are so many dos and don’ts which they do not really understand. It has been suddenly a different kind of life for them, ”she said.

According to her, due to poor connectivity, the continuous learning did not happen properly. In families where there were one or more siblings and there was only one smartphone, the other child would always get the preference regarding phone usage for online classes.

Percy Cardozo, educationist and psychologist at Sangath, who is heading the project on inclusive education, said that teachers have to be patient with these children when they return to schools for next academic year.

“There will be pressure on teachers to bridge the gap in learning caused by lack of physical schooling in the last two years. But they should be patient and provide support to these children. “Teachers need to arm themselves with additional skills to support these children for their mental health needs,” Cardozo said.

The priority has to be to make the children settle down and become comfortable with the environment.

“A child with autism could take a longer time to settle down. It could range from two weeks to two months or more. Focus should be on sensitizing the students and start academics gradually and pick up the pace depending upon the progress made. Just because there has been a gap, the teachers must not rush into things. This will prove disastrous as children won’t learn anything, ”she said.