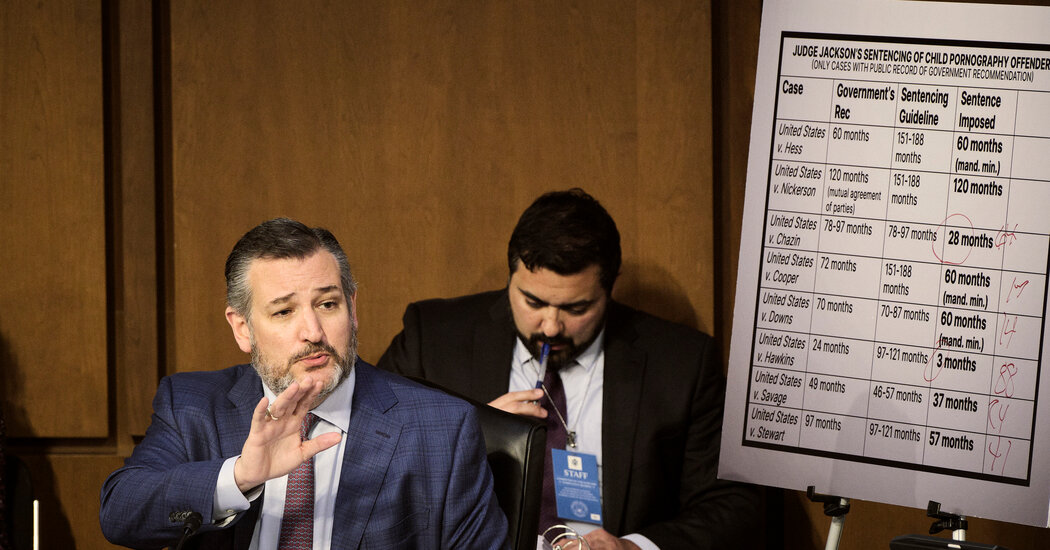 But all of the Republican critics had previously voted to confirm judges who had given out prison terms below prosecutor recommendations, the very bar they accused Judge Jackson of failing to clear.

Just 30 percent of offenders who possessed or shared images of child sex abuse received a sentence within the range suggested by nonbinding federal guidelines in the 2019 fiscal year, and 59 percent received a sentence below the guideline range. And in general, it is not uncommon for judges to impose shorter sentences than what prosecutors have recommended.

“I listed these seven cases in which you had discretion and you did not follow the prosecutor’s recommendation or the sentencing guidelines,” Senator Josh Hawley, Republican of Missouri, said at Judge Jackson’s hearing on Tuesday. “I’m questioning how you used your discretion in these cases.”

Mr. Hawley’s point was echoed by three of his Republican colleagues: Senators Lindsey Graham of South Carolina, Tom Cotton of Arkansas and Ted Cruz of Texas. Mr. Cruz said the sentences imposed by Judge Jackson in cases involving images of child sex abuse were 47.2 percent less than the prosecutor’s recommendations on average.

“You were always under the recommendation of the prosecutor,” Mr. Graham told the judge on Wednesday. “I think you’re doing it wrong, and every judge who does what you’re doing is making it easier for children to be exploited.”

But Mr. Hawley, Mr. Graham, Mr. Cotton and Mr. Cruz all voted to confirm judges nominated by President Donald J. Trump to appeals courts even though those nominees had given out sentences lighter than prosecutor recommendations in cases involving images of child sex abuse. Mr. Graham had also voted to confirm Judge Jackson to the US Court of Appeals for the District of Columbia Circuit in 2021 in spite of the sentencing decisions she had made as a district judge.

In 2017, Judge Ralph R. Erickson was confirmed by a 95-to-1 vote to the US Court of Appeals for the Eighth Circuit, with Mr. Cotton, Mr. Cruz and Mr. Graham voting in the affirmative. (Mr. Hawley was not yet a senator.) While serving as a district court judge in North Dakota, Judge Erickson imposed sentences shorter than the prosecutor’s recommendations in nine cases involving child sex abuse imagery from 2009 to 2017, averaging 19 percent lower.

In the case of the greatest discrepancy – in which a 68-year-old man pleaded guilty to possessing and transporting such illicit materials – prosecutors asked for 151 months and Judge Erickson imposed a 96-month sentence.

Judge Amy J. St. This was confirmed by a 91-to-0 vote in 2018 to the US Court of Appeals for the Seventh Circuit. While serving as a district court judge in Illinois, Judge St. Eve imposed lighter sentences than prosecutor recommendations in two such cases. In United States v. Conrad, she sentenced a man who transported images of child sexual abuse to 198 months, 45 percent less than the prosecutor’s recommendation of 360 months.

All four Republican senators voted to confirm Judge Joseph F. Bianco to the US Court of Appeals for the Second Circuit in 2019. Previously, as a district court judge in New York, Judge Bianco ruled three defendants to prison terms shorter than what prosecutors had sought .

At a 2013 hearing for a 25-year-old defendant who possessed and distributed illicit materials, Judge Bianco stated that the court had “discretion” to impose such sentences and spoke of “mitigating circumstances” – an echo of what Judge Jackson repeatedly told the senators during this week’s hearings. The defendant received a 60-month prison term, while prosecutors had asked for “a sentence above the 60 months.”

“The guidelines here are just way disproportionate under the facts of this case, and I do not view them as particularly helpful in this case,” Judge Bianco said at the time. “I disagree with the government that this case is sort of in the heartland of normal cases. There are a number of mitigating factors in this case that I believe are compelling. ”

Most recently, Mr. Cotton, Mr. Cruz and Mr. Hawley voted to confirm Judge Andrew L. Brasher to the US Court of Appeals for the 11th Circuit in 2020. (Mr. Graham was not present for the vote.) As a district court judge in Alabama, Judge Brasher had ruled a defendant to 84 months in prison, below the prosecutor recommendation of 170 months.

In a 2019 hearing before he issued the sentence, Judge Brasher noted that “one of the things that I’m required by law to evaluate and consider with respect to” the defendant “is disparities between offenders who are similarly situated.”

That, too, was similar to an explanation that Judge Jackson gave for her sentencing decisions.

“Judges all over the country are grappling with how to apply this guideline under these circumstances,” she told Mr. Hawley on Wednesday. “The judge is not just evaluating what the government says in these cases. In every criminal case, a judge has to take into account all sorts of factors. ”