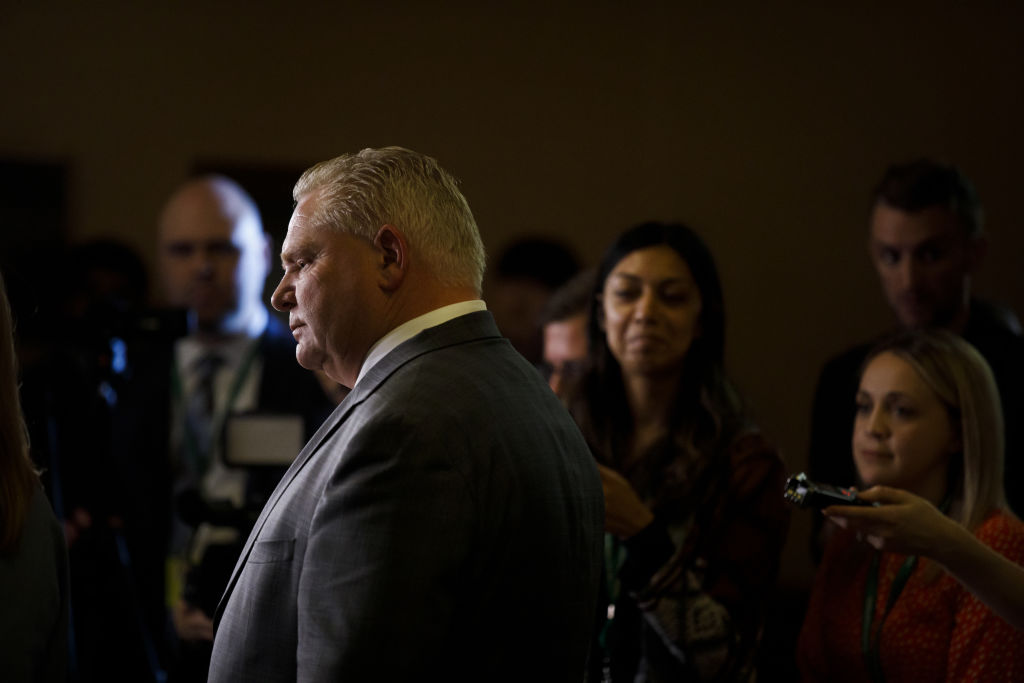 Ontario is going to the polls on June 2. On April 28, Doug Ford’s Progressive Conservative Party (PC) election budget posted a $ 1.3 billion drop in Ontario’s school funds. The budget posits the idea that this drop is the result of a decline in “non-government revenue” such as fundraising. Despite resurgent waves of COVID-19 infections and deaths, schools were left hundreds of millions of dollars short because, among other things, students hosted too few bake sales.

Of course, the problem was due to far more than a lack of bake sales and walkathons. Months earlier, Ford’s government quietly had plans to cut all of its emergency funding to schools – funds that could have been used to shrink class sizes to allow for social distancing. These cuts would have left schools $ 1.6 billion poorer and forced school boards to issue redundancy notices to thousands of education workers. The ensuing public outcry prompted subsequent cash injections that delayed some of the cuts, but the replacement funding was highly uneven.

According to internal records, in April 2021’s COVID-19 surge, schools accounted for more COVID-19 infections than any other location. It isn’t hard to see why. Well into September 2021, cash-strapped schools were reportedly forced to “collapse” many classes together – pushing up to thirty and even forty kids in classrooms.

Meanwhile, the government has continued cutting wages for teachers and has offered fewer full-time teaching jobs. In some cases, it has empowered school boards to contract out educational work to any adult who passes a criminal record check.

Since 2018, Ford’s government has attacked education funding and devised repeated strategies to privatize parts of the school system. Its funding projections indicate that new attacks on students and workers will be on the agenda if Ford is reelected.

Prior to the pandemic, the Ford government was battling the province’s public-sector unions over its plan to fire ten thousand teachers and increase class sizes. In the education minister’s own words, the government sought to replace: union members: with nonunion personnel. Ford himself was open to ending full-day schooling for kindergartners, remarking, “We’ll sit down and you’ll hear from us in the future.”

The government also sought to replace human teachers with mandatory online learning, modeled on similar experiments in Alabama and Arkansas, with higher class-size caps. Ford said this solution would save hundreds of millions of dollars and “prepare our young people for the jobs of the future.” A leaked memo further revealed plans to sell online learning content “at a profit.”

The order “spending review” also floated the idea of ​​a voucher system – in effect, subsidizing parents who send their kids to private schools. The firm that conducted the report for the Ford government, EY, summarized the system as “providing funding to individuals, who can then choose their service providers through a form of market activity and discipline.” Broadly speaking, the plan would mean “imposing competitive pressure on public sector providers.”

When the unions representing Ontario’s teachers protested, Ford called them “union thugs” who “were spoiling for a fight as soon as we ended up getting elected.” Ford later admonished them with a thinly veiled threat, stating that “if the head of the unions want to hurt the children of this province by doing walkouts and everything else, I’d think twice if I were them.”

Through 2019 and early 2020, this led to mass protests involving hundreds of thousands of students, teachers, and community members. It also eventually prompted mass, unprecedented strikes – by the unions representing all of Ontario’s teachers – involving tens of thousands of people on the lawn of the Ontario legislature.

Ford was intransigent in the face of this popular opposition. He refused to “roll over” and “give the unions what they want.” Talking big in early 2020, after he was repeatedly asked by pundits if he would use strikebreaking legislation, he warned, “There’s only so long my patience can last with the head of the unions. So stay tuned. ” Meanwhile, Ford’s party faithful concocted the support of fake parents and devised conspiracy theories about teachers “staging” student walkouts.

In the end, after many of the unions settled:, it appears that the Ford government has quietly accomplished many of its earlier ambitions. In 2020, instead of protecting students and education workers, the Ford government was busy contracting McKinsey to develop strategies for the province’s school openings in the fall. In short, the PCs were paying a private firm for counsel on how best to handle exactly the responsibilities that any self-respecting state should be able to manage on its own. The firm was also consulted about how to manage Ontario’s emergency response in accordance with “private sector supply chains.” Elsewhere, as an alternative to the publicly delivered system, the government mandated its e-learning supplier to “commercialize” educational content and approved a host of private online schools.

According to the Financial Accountability Office, the current current spending projections point to a $ 12.3 billion shortfall by the end of the decade. If funding has not increased, the report notes, it will mean a decrease in classroom staffing, supplies, and overall spending by school boards.

Throughout the pandemic, the government has capitalized on the need for online learning by privatizing components of the province’s online education. The PCs have also cut teachers’ pay. More cuts are likely if Ford’s party is returned to power in next week’s election.

The EY report that guided the cuts and privatization schemes framed them as a way to impose “discipline” across the broader public sector. In early 2020, Doug Ford took this idea further, saying the only alternative to hiking class sizes, privatizing parts of the school system, and breaking the province’s teachers’ unions was to choose to go on “stagnating.”

Attacking the public sector for Ford was, in part, about cutting the wages, salaries, and benefits that the government provides directly. But it was undoubtedly connected to the Ford country simultaneous attacks on workers elsewhere. These include cuts to the minimum wage, attacks on union protections, and schemes to channel money from workers’ compensation to employer’s funds

Universal public education does not have a particularly long history in Ontario. As RD Gidney notes in: From Hope to Harris:, prior to the 1960s, high school was an elite domain, intended “to select and prepare a minority of students for the universities and professions.” With the postwar boom, families could afford to have children in school for longer periods, and they expected more from government. Simultaneously, the expanded population required an expanded public-sector workforce, recruited from and embedded in working-class communities.

Since the 1970s, however, the system has been under a slow, protracted attack – in much the same way that working communities have been under attack. Austerity measures have been implemented by Liberal and Tory governments alike. Funding has been eroded and standardized tests have made teachers less secure.

Higher wages and better conditions in the public sector set expectations and wage pressure in the private sector. Blocking both is a key component to the Ford entry wholly regressive program. Seen in this light, the PC’s attacks on public education may very well be about preparing the workers of the future for “the jobs of the future.”

A two-tiered education system coheres with a worldview in which a vast swath of the population is only good for housecleaning and rideshare employment. If Doug Ford wins the election, it bodes poorly for students, teachers, and the quality of public education in Ontario.