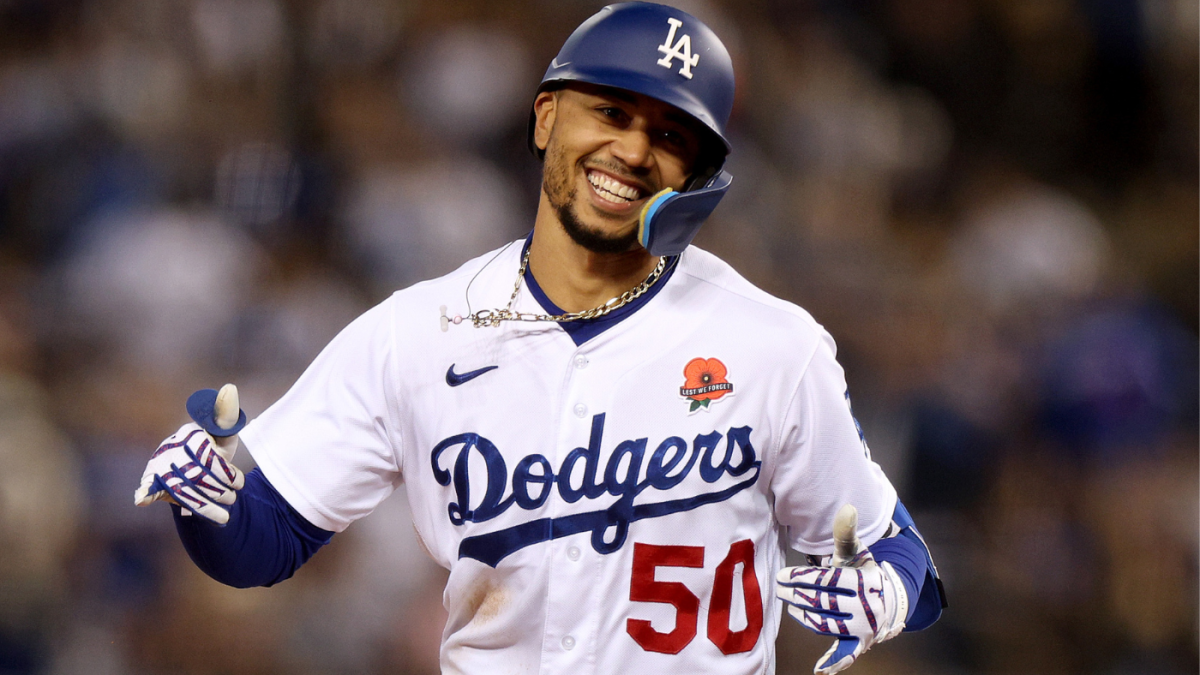 Balloting for the position-player starters for the 2022 Major League Baseball All-Star Game will be underway soon (it opened the Thursday after Memorial Day last year, but the game is a week later this year). The 2022 Midsummer Classic is set for Tuesday, July 19 at Dodger Stadium.

To get us prepared for the voting process, let’s run through it right now!

Now, there are people out there who see the word “Star” in the title and want the game to be about the biggest namess in the game, even if they aren’t playing well this season. That’s not the wrong answer or anything, but I’m more of a “who has been the biggest star this season” type. I reserve the right to fall back into that mode if it’s close and / or no one at a position has established himself, but in general I won’t go there.

Let’s get to the ballot, starting in the American League.

The chalk pick would’ve been Salvador Perez, but he’s not having a good season at all. See above regarding my thoughts on putting him in this spot due to easily being the biggest star available to be picked.

Jonah Heim has come from seemingly out of nowhere to have a very good offensive season and scores high marks defensively as well. Vázquez is hitting .303 / .346 / .420 and is a good receiver. We’ll take him here amid a lackluster field, by a nose over Heim (it’s also possible Heim isn’t on the ballot and the Rangers‘entry is Mitch Garver).

My guess is Sal wins the vote anyway.

Anthony Rizzo had the big power surge early, but he’s waned. José Abreu would get consideration under the “let’s take established stars” mindset. Vladimir Guerrero, Jr. is liable to make me regret not taking him, because he’s easily capable of a two-week tear to vault him to the top here.

I know Trevor Story is trying to make a run with his hot streak, but this wasn’t a difficult choice at all. Altuve leads in WAR, home runs and OPS. The established-star fans would be pleased as well, since Altuve is the biggest star here.

What a crowded position. Heading into the year, Carlos Correa, Corey Seager, Bo Bichette and Wander Franco would’ve been quality predictions for the starter here, but they’ve been buried by several others, including Correa’s replacement in Houston, Jeremy Peña. It’s really close and there isn’t a wrong answer, but Peña lags a step behind with JP Crawford for third and fourth place, respectively, here.

It’s between Tim Anderson and Xander Bogaerts. They are neck-and-neck. Anderson just hit the injured list, so perhaps Bogaerts can take advantage and separate himself in the counting stat categories. For now, though, I’m on Team Anderson.

Trout is among the MLB leaders in things like OPS +, wRC + and WAR, doing it all like a superstar once again. Simply, he’s having another Mike Freaking Trout season.

Judge would have a shot to beat Trout and Ramirez out for AL MVP at this point, too. He has an MLB lead in home runs by three and is on pace for 60. Easy pick.

Really, all three were. Ward leads the majors in OPS. He has seven doubles, two triples and 10 homers. In just 35 games, he’s scored 29 times and driven home 26.

Others with a chance to make some noise in the coming weeks and could merit a vote down the road, especially if Ward hits a major slump: George Springer, Kyle Tucker, Andrew Benintendi, Byron Buxton (he’d have to get insanely hot, but he’s capable of doing that) and, yes, Julio Rodríguez.

Giancarlo Stanton and Yordan Alvarez has some seriously gaudy power numbers and deserve a look. Trey Mancini should be commended for another good season. Shohei Ohtani is going to run away with this thing (it might end up being the biggest gap for a winner) and that’s perfectly acceptable.

But right now, JD is a hit-tool machine. He “only” has five home runs, but he’s hitting and MLB-best .363 with a .425 on-base, both of which would be career highs by a country mile. Even if he doesn’t have the HR power he had in his prime, he’s learned how to be a more complete hitter in his mid-30s.

If things stay on this course, Contreras could deservedly start his second All-Star Game, but this time around, there will be tons of talk during the entire week about whether or not he’ll be traded.

Will Smith is talented enough to get hot and make a run. So is JT Realmuto. Omar Narváez and Tyler Stephenson have been good enough to be mentioned. If Daulton Varsho were listed here instead of the outfield, he’d be a strong candidate, but my guess is he’ll be in the outfield.

There will surely be a Cardinals-fan push for Yadier Molina here, too, but Contreras has been the best catcher in the NL (he’s sixth in the NL in OPS + and seventh in position-player WAR) and his track record says he’s likely to be a deserving choice.

Oh man. What a crowded field.

Eric Hosmer got off to an MVP-caliber start, but he’s not even a serious consideration. CJ Cron has big numbers. To a lesser extent, so does Rowdy Tellez. Josh Bell got off to a great start. Matt Olson has been a doubles machine (he’s on pace for over 70!). Again, none of them were really considered.

It’s between Paul Goldschmidt, Freddie Freeman and Pete Alonso. The funny thing is, a lot of times you can get a decent read on how the fan bases might react in voting, but these are three huge fan bases and that will absolutely bring it in voting for their guys. If I had to guess, I think the Mets fans get it done for Alonso, but I could be wrong.

Goldschmidt, though, for me, has been the best player here across the board, even if he’s fending off two fellow MVP (to this point) candidates.

Jeff McNeil is having a great year for the Mets and I worked hard in my head on behalf of Jazz Chisholm, with his speed-power-fun combination. Edman, though, has been the best all-around player among this group. Between the average, extra-base power, on-base chops, stolen bases and help on defense (he’s now moved to shortstop to accommodate talented rookie Nolan Gorman), he’s such a valuable player. It shows up, statistically, as he trails only Manny Machado and Mookie Betts in WAR among NL players.

Nolan Arenado would have a strong case, but he’s being lapped by Machado, who is the best position player in the NL this year. Machado is currently hitting .347 / .426 / .563. He’s walking more than ever, stealing bases, playing exceptional defense and generally holding down the proverbial fort with Fernando Tatis, Jr. injured. Even with the presence of a titan like Arenado, this was a blowout.

Trea Turner would be a decent pick and Willy Adames would’ve had a shot before his injury, but this ended up being pretty easy as well.

How’s this for a stat-sheet stuffer? Lindor is on pace for 25 doubles, six triples, 25 home runs, 133 RBI, 118 runs and 22 stolen bases with an OPS roughly 30 percent better than the league average. Eye-test wise, he seems to have his mojo back, too, doesn’t he? All kinds of positive vibes.

In the third base comment, I mentioned that Machado was the best NL position player. If someone has a serious beef there, it’s Betts. Mookie had an absurd month of May and now has 12 doubles and 15 home runs. He leads the league in homers and total bases. Oh and he leads the majors with 50 runs scored. Fifty! The Dodgers have played 50 games. The only time post-integration that a player has scored at least 150 runs in a season was 2000, when Jeff Bagwell crossed home 152 times. It’s been a long, long time since a player scored at least a run per team game in a full season.

Nimmo has been excellent at getting on base and scoring runs in front of the thumpers in the middle of the Mets’ batting order. He’s displayed great gap power, too, pushing him up to a 142 OPS +. With quality defense in the center field, this has the makings of a career year. Good timing, as he hits free agency this coming offseason.

Soto is having a good year, even if it’s not great by his lofty standards. I’m trusting that he’ll get hotter closer to July. Even if he doesn’t, he’s still in the top 10 in the NL in on-base percentage and OPS +. Consider this me straying, albeit slightly, from only focusing on this season and instead going with star power.

Past Soto, we’d be looking at the likes of Mike Yastrzemski, Starling Marte and Joc Pederson (so the Mets and Giants, apparently!). Also, Varsho and then maybe it’s possible Ronald Acuña, Jr. or Juan Yepez will rack up enough stats before the voting concludes.

The injury to Harper’s elbow made this easy, hopefully, because otherwise it was going to be a mess with few full-time DHs having migrated over to the NL side (and Nelson Cruz isn’t great anymore, unfortunately). I say hopefully because I’m assuming Harper is listed here instead of in the outfield. He only has eight outfield starts this season compared to 37 at DH.

See you at the polls.