Gareth Bale has agreed to join MLS side Los Angeles FC on a one-year deal.

The forward, a free agent after leaving Real Madrid this summer, had other offers but has chosen to move to California and the MLS.

He later confirmed the move on his social media pages, saying: “See you soon, Los Angeles”. It was accompanied by a video of Bale in a LAFC hat – something that was teased on the club’s channels the previous evening as they posted their own video of the hat being sent in a box to Bale.

Bale is looking to maintain his fitness ahead of Wales’ appearance at the 2022 World Cup in Qatar. They qualified last month after beating Ukraine in their World Cup play-off final in Cardiff with Bale’s free-kick nodded home by Andriy Yarmolenko in the only goal of the game.

Sky Sports News’ Dharmesh Sheth said: “If we go back to just before that famous afternoon when Wales beat Ukraine in the World Cup Qualifiers, there was all sorts of speculation about Gareth Bale’s future. If Wales had failed to qualify for the World Cup, there was even talk that Bale would retire from football altogether.

Wales captain Gareth Bale has dismissed reports linking him with a move to Getafe, as well as explaining his thinking behind any potential move in the near future

“Then, when he did help Wales qualify for the World Cup for the first time in 64 years, there was even talk that he could join his hometown club, the club he supported as a boy in Cardiff City.

“He held talks with Cardiff City manager Steve Morrison about a potential move there and we were talking about a short-term deal to keep him fit leading into that World Cup in Qatar. 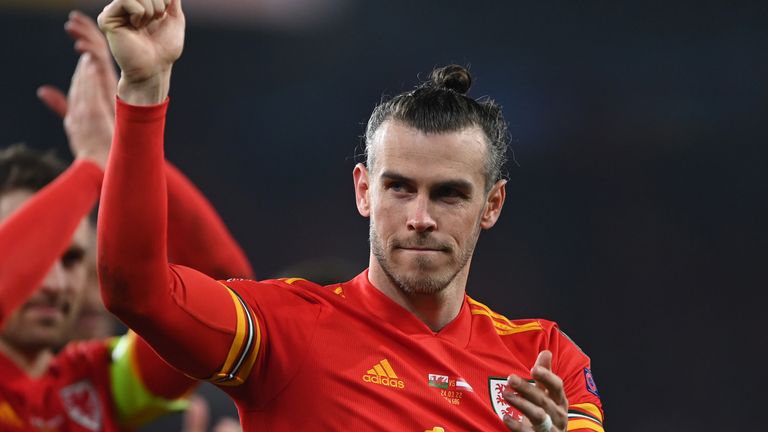 “But it looks like he’s chosen a one-year deal, some are even reporting there is a further option in that deal, to go Stateside with the MLS side LAFC.

“He will be in good company as well because the Italian defender Giorgio Chiellini is set to join LAFC as well.”

The MLS regular season finishes on October 9, with MLS Cup play-off matches due to conclude in early November. LAFC are currently top of the Western Conference with 30 points.

Wales open their World Cup campaign against USA on November 21.

Bale joined Real Madrid from Tottenham for a then-world-record fee of £ 85.1m in 2013 and often had a fractious relationship with fans and the hierarchy at the La Liga club.

This included high-profile fallings out with Zinedine Zidane, a redemption in the 2018 Champions League final featuring a spectacular overhead kick goal, and a year on loan at former club Tottenham Hotspur in 2021/22.

Reporter notebook: Why Bale’s MLS move is good for all involved

“While Bale’s transfer to the US may come as a surprise to some. To those in the Wales set-up, this will not be a shock.

“It would have been a huge risk for Bale to take even a short contract to play in the Championship, the risk of being injured either through a mistimed tackle or just the attritional wear and tear of one of the toughest leagues in the world was, in my opinion, never on the cards.

“Take emotion out of Bale playing for Cardiff City prior to the World Cup and it didn’t become too much of a possibility.

“Even before the rumors of a move to Cardiff City started to gather some pace, a transfer to the MLS was already being mooted. Bale needs to get the balance of playing, getting match fit, while reducing the risk of injury and the MLS should provide that balance.

“It also gives Bale the perfect environment to get himself into the right shape to lead Wales at the World Cup come November. The climate in terms of weather in California will be ideal, but it is also an ideal climate for him and his family to live and work in a degree of anonymity.The irony of working for a club in Los Angeles, a city where showbiz reigns supreme, is that not too many people will bother Bale or necessarily even know who he is.He will enjoy not being the center of attention.

“From Wales and Page’s perspective, this is a really good outcome. The workload on Bale is manageable, but it will also raise his fitness ahead of the World Cup. Wales has long had total trust in Bale’s ability to manage his own body; the The 32-year-old is a fantastic athlete no matter what you may have read or heard about his fitness. “

Earnshaw: A great move for Bale | The MLS will love him

“I think he’s picked the best club he could have gone to in the MLS. Right now, they sit top of the league so it’s great news. I’m down the road so if he needs any help, I can assist him!

“This is a great move for him. He needs to be playing for the World Cup in a few months and also it’s in season. He hasn’t spent a lot of time playing this past season for Real Madrid, he’s left there now so it’s a new chapter.

“We’re going to see a new Bale in a different country, in the MLS. A few weeks ago, I thought there was a chance. Knowing him and having played with him, understanding his mentality, I think he’s going to love it .

“I was at LAFC a few weeks ago and the atmosphere is amazing there, the fans are amazing, a really good stadium and he will love it there.

“Every location he’s going to go to, it’s going to be competitive. He’s going to find it a challenge, it’s not going to be easy for him because it’s a fast, end-to-end league and you’ve got to be fit It’ll give him that fitness he needs.

“The MLS is going to love having him. He’s going to bring all his skills and I think he’s going to do very well.”

Frank: Not too demanding for an injury-prone player, training in hot weather to prepare for Qatar, great move for him and Wales!

Hiney: Personally I think Gareth Bale should have moved back to English football it would have helped him have higher fitness levels for the World Cup.

Steve: As a Welshman it would have been lovely for Gareth to play for Cardiff … however I am so relieved he isn’t going to subject himself to arguably the most physical league in Europe. Right move for now and also pretty sure he’ll be playing in warmer conditions ready for Qatar.

jay: Good move, fact-finding mission too, with the USA being in Wales’ group he will learn what to expect.

Bale signed off from his “dream” nine-year Real Madrid stint with an open letter to the club’s fans.

His relationship with the club’s fans deteriorated over what was often perceived as a work-shy mentality towards the end of his time in Spain, which was not helped when he was pictured alongside a fan’s ‘Wales, Golf, Madrid’ flag in November 2019 after helping his country qualify for Euro 2020.

Despite that, he was given a rapturous applause as he made his final public appearance as a Real player during their Champions League homecoming in May, and responded with an open letter to the club’s fans on social media.

He wrote on Twitter: “I write this message to say thank you to all my team mates, past and present, my managers, the backroom staff and to the fans that supported me.

“I arrived here nine years ago as a young man who wanted to realize my dream of playing for Real Madrid. To wear the pristine white kit, to wear the crest on my chest, to play at the Santiago Bernabeu, to win titles and to be part of what it’s so famous for, to win the Champions League.

“I can now look back, reflect and say with honesty that this dream became a reality and much, much more. To be a part of this club’s history and to achieve what we achieved while I was a Real Madrid player, has been an incredible experience and one I will never forget.

“I also want to thank President Florentino Perez, Jose Angel Sanchez, and the board for giving me the opportunity to play for this club. Together we were able to create some moments that will live forever in the history of this club and football.

“It has been an honor. Thank you! HALA MADRID!”