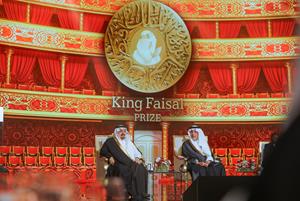 Riyadh, March 29, 2022 (GLOBE NEWSWIRE) – Two mathematicians and a scientist were among this year’s King Faisal Prize’s seven laureates who received their prizes on March 29 in Riyadh, Saudi Arabia, for having enriched humanity with key and invaluable achievements and discoveries , and excelled in the fields of Medicine, Science, Arabic Language & Literature, and Serving to Islam.

The Medicine Prize was awarded to Professor David Liu, Richard Merkin Professor and Director of the Merkin Institute of Transformative Technologies in Healthcare, who invented the first gene “base editor” in 2016.

This technology laid the foundation for possibly treating thousands of genetic diseases like sickle cell disease and muscular dystrophy. Professor David Liu used “base editors” in mice to correct the genetic mutation behind progeria, a rare condition characterized by premature aging, retarded development, and early death. Still, more work needs to be done before gene “base editors” can be used in humans.

Initiating a revolution in genome editing, “base editors” have received great global demand. They have been distributed over 9,000 times to more than 3,000 laboratories around the world. Scientists were able to publish more than 300 papers on this technique, used in different organisms ranging from bacteria to mice.

“Base editing” is a precise genome editing method; like a genetic pencil, that rewrites DNA base letters, which cause genetic mutations and potentially genetic diseases. This technology, which is in constant development, chemically rewrites one DNA base to another by rearranging the atoms of one DNA base to resemble a different base. In 2019, Professor David Liu created with his team “prime editing” which offers more targeting flexibility and greater editing precision.

With over 75 issued US patents, Professor Liu was referred to as the “Gene Corrector” by Nature magazine topping its list of “Ten People Who Mattered This Year” in 2017 and was included in the “Foreign Policy Leading Global Thinkers list”. He is also a biotech entrepreneur, cofounding “Editas Medicine”, which uses CRISPR therapies (tool for editing genomes) to “discover, develop, manufacture, and commercialize transformative, durable, and precise genomic medicines for a broad class of diseases”.

The Science Prize (Mathematics) was awarded jointly to Professor Martin Hairer, Chair in Probability and Stochastic Analysis at the Imperial College’s Department of Mathematics, and to Professor Nader Masmoudi, a distinguished Professor of Mathematics at the New York University of Abu Dhabi and head of his Research Center on Stability, Instability and Turbulence.

Professor Martin Hairer developed the theory of regularity structures which gave a precise mathematical meaning to several equations that were previously outside the scope of mathematical analysis. He published his theory in 2014 providing tools and manuals for solving many previously incomprehensible equations called the stochastic partial differential equations (SPDEs). These equations involve chance and describe how randomness throws disorder into different phenomena like coin tossing, stock price changes, wind movement in a tunnel, or forest fire growth. He transformed the area of ​​SPDEs by introducing fundamental new techniques and was able to solve equations like KPZ equation which describes the evolution of the boundary at which two substances meet over time.

Professor Hairer is a world leader in probability theory and analysis and has authored a monograph and over 100 research articles. His work has been distinguished with several prizes and awards, most notably the LMS Whitehead and Philip Leverhulme prizes in 2008, the Fermat prize in 2013, the Fröhlich prize and the Fields Medal in 2014, a knighthood in 2016, and the Breakthrough prize in Mathematics in 2020.

As for Professor Nader Masmoudi, he was able to unlock the mystery around many physics problems which remained unsolved for centuries. He found a flaw in “Euler’s” mathematical equations which for more than two centuries described the motions of fluids under any circumstance. He discovered that Euler’s equations do not apply to all circumstances, as previously thought, and proved that they could break or fail under certain conditions related to fluids. His work helped solve and understand many problems related to fluid-modeling like weather predictions and airplane turbulence.

For the past 20 years, Professor Masmoudi’s research has been at the forefront of Partial Differential Equations, Fluid Mechanics, and Dynamical Systems. He has been cited by more than 8000 papers for his works in pure and applied mathematics. He has been recognized with numerous awards, including the Best Scientific Paper Award in the Annales de l’Institue Henri Poincaré, a Chair from the Fondation Sciences Mathematiques de Paris, The Fermat Prize, and the Chair Schlumberger from the IHES in Paris.

In addition to Medicine and Science, the King Faisal Prize recognized this year the achievements of outstanding thinkers and scholars in the field of Arabic Language & Literature, and honored exemplary leaders who played a pivotal role in serving Islam, Muslims, and humanity at large.

Professor Suzanne Stetkevych was awarded the prize for her extensive research and work analyzing Arabic literature with unmatched depth from the pre-Islamic period to the revivalist period. Her research approach resulted in the renewal of the critical perspective and methods of studying classical Arabic poetry.

The Service to Islam Prize was awarded to the former Tanzanian President His Excellency Ali Hassan Mwinyi and to Professor Hassan Mahmoud Al Shafei. His Excellency Ali Hassan Mwinyi actively participated in Islamic advocacy, spreading the spirit of religious tolerance, educating Muslims, and translating many Islamic resources and references into Swahili language. In parallel, Professor Hassan Mahmoud Alshafei served Islamic sciences through teaching, writing, authenticating, and translating, and has contributed to the establishment of the International Islamic University in Islamabad and the development of its colleges’ curricula.

The Islamic Studies Prize for this year on “Islamic Heritage of Al-Andalus” was withheld because the nominated works did not meet the criteria of the prize.

Since 1979, the King Faisal Prize in its 5 different categories has awarded 282 laureates from 44 different nationalities who have made distinguished contributions to different sciences and causes. Each prize laureate is endowed with USD 200 thousand; a 24-carat gold medal weighing 200 grams, and a Certificate inscribed with the Laureate’s name and a summary of their work which qualified them for the prize.