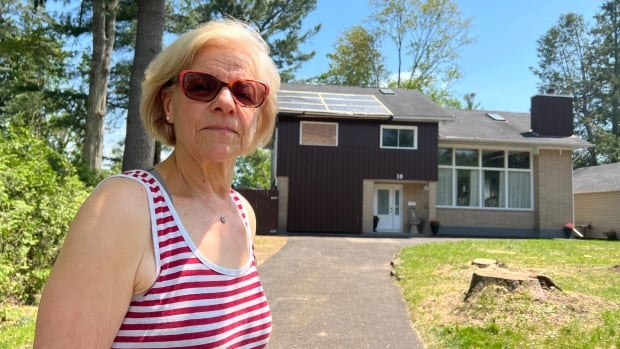 A black and yellow generator has been buzzing outside Nabila Awad’s home for the past nine days – its near-constant hum a reminder of rising costs and hundreds of dollars in gas guzzled.

The 70-year-old Grenfell Glen resident has been saving her receipts, but hasn’t stopped to tally them up.

“I’ve been too busy filling up my gas and coming and going all the time,” she explained.

Still, Awad estimates that she burns through at least one 20 liter jerry can a day. With gas at roughly two dollars a liter that works out to about $ 360 so far.

“It’s pretty costly, but my insurance, thank God I have good insurance… they’re paying for all my gas and ordering out food because we have no water.”

Despite the damage and lack of power, that makes Awad one of the lucky ones.

Officials said Monday that approximately 6,500 customers in the city still don’t have electricity, more than a week after a deadly right windstorm battered Ottawa. Many of those still relying on generators to keep their fridges functioning are watching their bills rise, wondering whether their insurance will cover it.

Unfortunately, there isn’t an easy answer.

Anne Marie Thomas, director of consumer and industry relations for the Insurance Bureau of Canada (IBC), said while home insurance policy holders will generally be reimbursed for food waste, wind damage and even some cleanup costs, fuel or generators aren’t clear cut question.

“They could be,” she said. “I don’t want to say everyone is going to be covered because… it’s all dependent on the type of policy you bought, how much coverage your bought and are those things included as part of your coverage.”

On the other hand, renting a chainsaw or sump pump to limit damage would likely be covered, according to Thomas, who spent Monday at the Howard Darwin Centennial Arena emergency reception center with other IBC staff answering community member questions.

“By doing those kinds of things you are preventing further damage to your property and that’s a good thing for you and your insurance company.”

‘A tale of two cities’

Thomas stressed Ottawans may experience delays in hearing from their insurance providers, pointing to the scope of storm damage and the number of claims companies are juggling.

“It’s a matter of being patient right now to determine what is covered and what isn’t covered,” she said.

Mayor Jim Watson said Monday that the city is making progress cleaning up from the storm.

“We very much want to get everyone’s power on as quickly as possible,” he said during an afternoon media update. “I know it’s frustrating, it’s annoying and it’s very inconvenient. We are doing everything we can.”

Power for about 180,000 households was knocked out initially and, while the majority of Hydro Ottawa customers are back up and running, CEO Bryce Conrad acknowledged thousands are still waiting.

“If you’re one of the [people] without power it’s the priority, it’s the only thing, “he said Monday.

Expecting a bill ‘in the thousands’

Bob Carberry spent the past week or so on the wrong side of that divide.

Stacks of logs and branches still line the streets of his Merivale Gardens neighborhood and on Monday dump trucks could be seen carting out damaged trees.

The longtime resident said he already got an answer on whether running his natural gas generator will be covered – it won’t.

His power came back around 2:30 am on Monday, but not before he racked up what’s anticipated to be a hefty bill.

“I don’t know what it’s going to be, but I expect it’s gonna be in the thousands,” he said.

Carberry was helping provide power and water to neighbors on either side of his house for days.

One of them gave him several hundred dollars to help cover the cost, he said.

“Maybe the city could be helpful in covering some folks like us where we incurred those type of expenses,” Carberry said. “It would be great.”