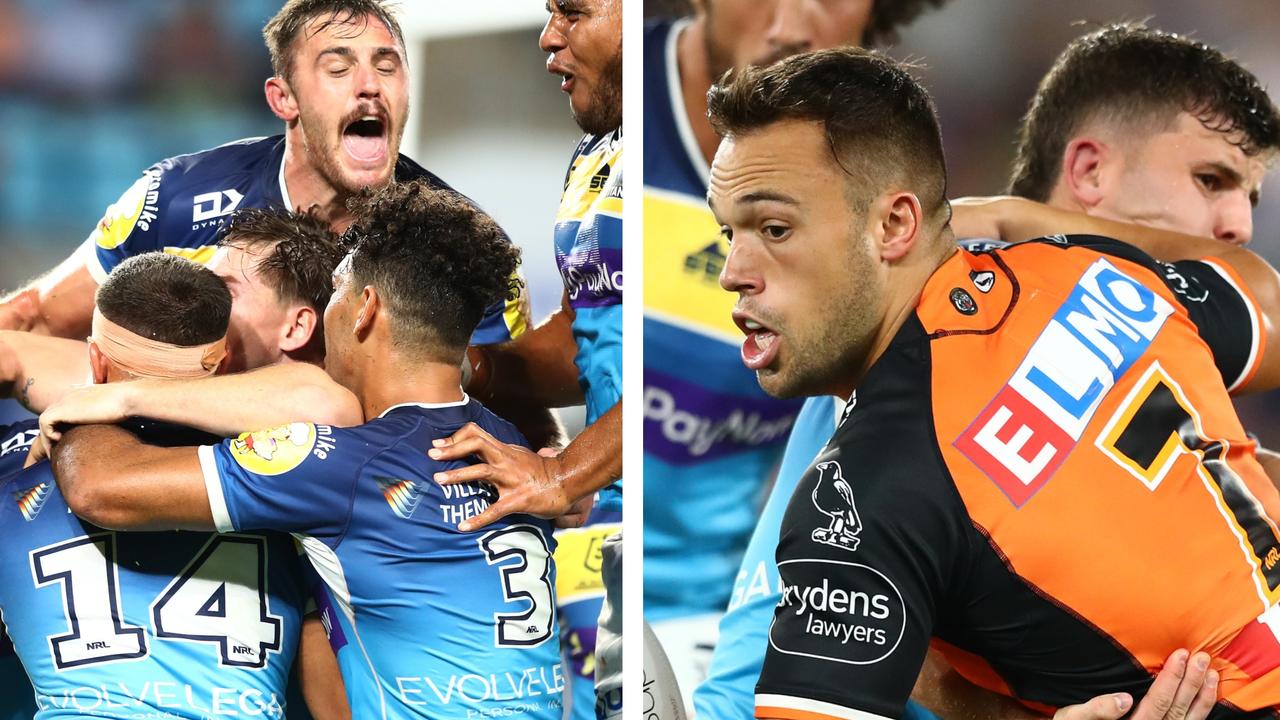 The Titans have come-from-behind to score a match winner in the final minute as the Tigers let their first win slip through their fingers in a devastating 8-6 loss.

Jacob Liddle was involved in a sickening head collision early in the game as both sides were guilty of blowing a good field position.

Corey Thompson thought he was over for the first try, before dropping the ball with the line begging.

Oliver Gildart then spilled the ball at the other end of the field with the Tigers close to scoring in the corner.

Tyrone Peachey was sent to the sin bin for a professional foul reducing the Tigers to 12 men.

A crusher tackle allowed the Titans to sneak in a penalty goal for a 2-0 lead.

However, the Tigers responded with a penalty of their own to make it 2-2 at the break.

The second half followed the same pattern as the first until Jamayne Isaako ran behind David Fifita to gift Luke Brooks the chance to slot a penalty for a 4-2 lead.

Luke Brooks kicked another penalty goal to make it 6-2, before a stunning finish.

The Tigers spilt a Toby Sexton kick that bounced off the goal post with a minute to go in the in-goal and AJ Brimson pounced to steal a crazy win.

TIGERS BLOW IT AS 29-YEAR-FIRST AVOIDED

The Tigers led a tryless contest 6-2 with a minute on the clock before a Toby Sexton kick hit the post and AJ Brimson pounced on an error from Jock Madden in the in-goal to steal a famous win.

“You cannot write a more devastating script for the Tigers. They had it. ”

“That word is thrown around a bit but what we have just seen is unbelievable.

“Absolutely shattered in the box the Wests Tigers coaching staff.

“The Titans have stuck a shiv in the Wests Tigers,” Ginnane added.

The Titans and the Tigers nearly became the first teams to play out a tryless game in 29 years in a dour affair on the Glitter Strip.

“29 years ago in Round 12, the Bulldogs took on the Steelers in 1993 for the last tryless game,” Corey Parker said.

“It has been slim pickings this evening.”

The 2-2 halftime scoreline was also the first time that has occurred since the first round of the 2020 season with both sides blowing five try-scoring opportunities in the first 40 between them.

Dan Ginnane and Greg Alexander blasted both sides’ execution in a horror first half.

“Chances a plenty for both sides, but no one has been able to convert,” Ginnane said.

“The Tigers’ no try turned out to be a correct decision with Maumalo getting a finger tip to it.

“It has been a case of so near, but yet so far. Tyrone Peachey spent 10 in the bin, but no damage done.

“The last 2-2 halftime score was in the season opener in 2020 between Canterbury and Parramatta. That was just before the Covid lockdown.

“That is the first tryless first half of the year.”

“The execution from both sides needs to improve,” Alexander added at halftime.

“Otherwise we might have a 2-2 scoreline at the death.”

The Gold Coast Titans need to work out how to get the ball to their $ 1.2ma year player David Fifita after another confounding performance against the Tigers.

At one stage during the game the Titans had a full set inside the Tigers 20 meter line and didn’t get the ball to Fifita once.

Their star signing was even putting his hands up in comical scenes that wouldn’t be out of place at an under 5’s rugby league game, but still his teammates ignored him.

Greg Alexander blasted the Titans for their inability to find their most damaging ball-runner for a full set in the red zone.

“Can you believe that the Titans went through a set inside the 20 and they didn’t give it to David Fifita?” Alexander said.

“They don’t get the ball to David Fifita once.”

“Fifita is normally shy but he had his hand straight up in the air,” Dan Ginnane added.

“He was begging for it Fifita.”

ONE POSITIVE FOR BOTH TEAMS AS ATTACK FIZZLES

Cooper Cronk believes the only positive for the Tigers and the Titans in their dour clash was their commitment in defense, which has been an issue for both sides.

“If there was one positive for both teams and the coaches at halftime, they are defending their goal line,” Cronk said.

“Those last-ditch efforts by both sides have been stifled by decent defense.

“But I’ll tell you what, both side’s coach will have to have a really good halftime chat to get these teams up and about because they are unsure and playing with a lack of confidence.”

However, it is hard to work out if it was a good defense or if it was just a worse attack from both teams.

Cronk believes both sides have to make massive improvements if they want to do anything this season.

“Absolutely (there is room for improvement),” Cronk said at halftime.

“It was 2-2 and both those penalties came late in the half.

“Corey Thompson spilled the ball with the line wide open. Then Gildart found space, but just didn’t ice that play.

“In the 23rd minute Tyrone Peachey got sin-binned and I thought the Titans were coming but then back-to-back errors stifled their opportunities to come back.”

The Gold Coast Titans host the Wests Tigers in a crucial clash at Cbus Super Stadium.

Beau Fermor was a late scratching for the Titans with Kevin Proctor starting and Sam McIntyre joining the bench.

The Titans have lost prop Isaac Liu to Covid protocols with Jaimin Jolliffe taking his starting spot and Jarrod Wallace joining the bench for his first game of the season.

Former Broncos star Jamayne Isaako debut for the Titans at fullback after his club switch with Jayden Campbell out with a rib injury.

Corey Thompson returns from a broken hand in a timely boost with Origin winger Phillip Sami out due to Covid protocols.

For the Tigers James Roberts returns from a quad injury at center, Ken Maumalo makes his comeback from an ankle complaint and back-rower Kelma Tuilagi is back after suffering a head knock.

The Tigers desperately need a win to ease the pressure on under-fire coach Michael Maguire and halfback Luke Brooks.

Justin Holbrook will also be feeling the heat after investing in youth in his spine this season with the Titans staring at a 1-3 start to their campaign.

It sets the scene for an intriguing clash between two equally desperate sides on the Gold Coast.

RELIVE THE ACTION IN OUR BLOG BELOW. CAN’T SEE IT? CLICK HERE.