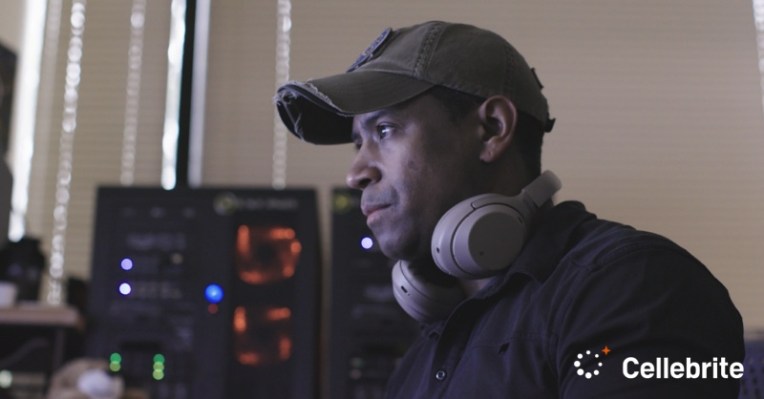 Child exploitation cases have skyrocketed, presenting law enforcement agencies with a massive challenge to save more children from these heinous crimes.

The National Center for Missing & Exploited Children (NCMEC), a private, non-profit organization that serves as the national clearinghouse and resource center for information about missing and exploited children reports that in 2019, their CyberTipline received more than 16.9 million reports. Most of these notifications related to:

Globally, the number is even more shocking with the International Labor Organization estimating that 1.8 million children are exploited in prostitution or pornography worldwide.

In these turbulent times, one organization that has made a significant impact on solving more child exploitation cases faster is the Seattle Police Department Internet Crimes Against Children Task Force (ICAC). Their mission is to “continuously engage in proactive and reactive investigations and prosecutions of persons involved in child abuse and exploitation involving the Internet. ”

The Seattle Police Department provides a good illustration of how ICAC units function all over the United States. The majority of the child exploitation cases they cover come from NCMEC, which geolocates reports to the region and whichever ICAC unit is closest to where that report activity occurred. Any reports for their region come to Seattle PD’s ICAC Unit.

Like their fellow ICAC units, however, Seattle PD also fields child exploitation reports from other sources. These range from those who walk into a precinct to file a report to a patrol officer who goes out on a call or makes a traffic stop and sees something suspicious, to a school that calls directly into their offices. All of those end up being separate case referrals for them.

Dealing with crimes against children cases is rife with challenges:

Caseloads are increasing: “In 2014, as the lead agency, we were averaging between 125 and 150 referrals [from NCMEC] a month, ”Michael Edwards, Captain for the High-Risk Victims Section, Statewide Commander for the Washington State ICAC Task Force and 40-year-old Seattle PD veterans began. “Today, we are currently averaging between 425 and 450 a month.”

Device numbers are growing exponentially: Randy Kyburz, a detective, digital forensic examiner, and 29-year veteran with Seattle PD spoke to the device problem this way. “When I first started this… we’d come out of a house with maybe one flip phone and a laptop and maybe a desktop… Now we’re coming out of search warrants with 20 to 30 devices.”

Technological advances are driving data overload: As Detective Kyburz pointed out, “in a typical case they’re carving through terabytes [of data]multi-terabytes, even.… Now, on the norm, 10 to 20 terabytes are not unusual. ”

Perpetrators are getting smarter: As Detective Ian Polhemus, another 29-year-old Seattle PD member and ICAC veteran since 2007 describes, “[suspects] have become more technologically savvy… in an attempt to obfuscate their activities. Specific examples of that would include the dark web, peer-to-peer technologies, IP anonymizers, and proxies. ”

Time is the enemy: As Captain Edwards pointed out, “Anything that increases that time profile for us, makes it so much more difficult. So, everything from storage, encryption, the fact that now even the storage itself, it’s no longer just on the device itself, it’s up in the Cloud, it’s internationally based… There’s all of these other things that we’re dealing with that we weren’t dealing with a few years ago that are causing us to now elongate that time period. ” 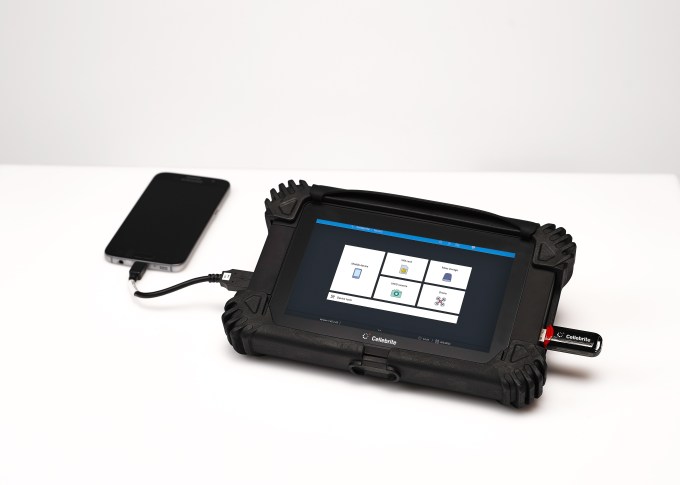 Cellebrite tools, such as UFED, can save time in child-exploitation cases when time is of essence by collecting digital data from devices recovered during the investigation.

Threats to funding: Conducting child-exploitation investigations takes a heavy toll on investigators and most move on after five to seven years. Replacing them is a real problem according to Captain Edwards. “And there’s a tremendous amount of uncertainty right now, with the defunding movement in particular, as to whether or not there will be personnel to fill those vacancies.”

The impact of COVID: The negative impact the pandemic has had on city and police budgets is a problem agencies all over the world are dealing with. As Captain Edwards described, “I’ve got agencies across the state that are not able to fully meet their duties and responsibilities in the Task Force because they are also being hit economically, and are looking at not filling vacancies.”

Fortunately, technology is supplying some much needed relief for Seattle PD’s ICAC unit and similar units around the world. Like many organizations, Seattle PD has transformed the way they are conducting investigations to utilize digital technology to its fullest extent.

Agencies need to manage digital evidence as diligently as physical evidence. SOPs must be in place to maintain data integrity and a clear process must be adhered to so that the right team members get the right information when they need it. This is where having a strong digital evidence management system (DEMS) that is linked to your case management system offers a huge advantage. By deploying DEMS, agencies can protect and manage for appellate processes, simplify discovery, manage retention, and comply with expungement.

Modern analytics solutions powered by AI are another way that technology is helping investigators to automatically sort through mountains of data to surface key insights quickly to provide teams with a full picture of data insights in a single view. 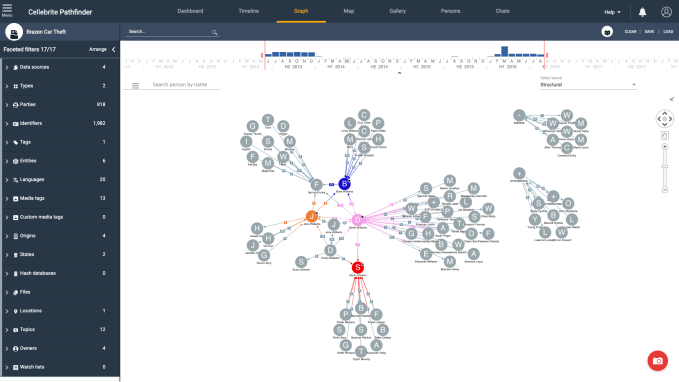 When authorized, analytics solutions are also providing the means for teams to share information across departments, agencies, and internationally, which is a huge help to units like Seattle PD who also collaborate with foreign agencies on some cases.

And while modern DI solutions still require manpower to drive key decisions during investigations, the time savings and peace of mind they can deliver to resource-strapped departments is helping many agency managers sleep better at night.

Technology is changing rapidly and as Captain Edwards pointed out, training has a shelf life. As technology advances, officers need to take refresher courses to keep up. Cellebrite’s Learning Center offers robust training programs that can be customized to meet the needs of departments and individuals alike through live-online and on-demand classes.

Education is equally important. Seven years ago Captain Edwards saw the need to create an ongoing educational program that would not only benefit his own team but help ICAC investigators all over the world. He enlisted Detective Ian Polhemus from his team to put the program together and the Northwest Regional ICAC Conference was born.

Now in its 7th year, the program has grown from 50 participants in year one to hundreds of ICAC professionals from all over the world who now make it a point to attend each year. The five-day event, normally held on the Microsoft campus, provides a forum for investigators, prosecutors, forensic examiners, industry professionals, and academics to come together to learn, collaborate, and share their knowledge of digital crime investigations involving child sexual exploitation.

Finding evidence by continuously training, asking the right questions, and utilizing the latest digital technologies has helped Seattle PD’s ICAC rescue hundreds of children, sometimes on the other side of the world. A case four years ago that Detective Kyburz helped solve followed the typical pattern of investigations he’s involved with, but its ending had far-reaching consequences. 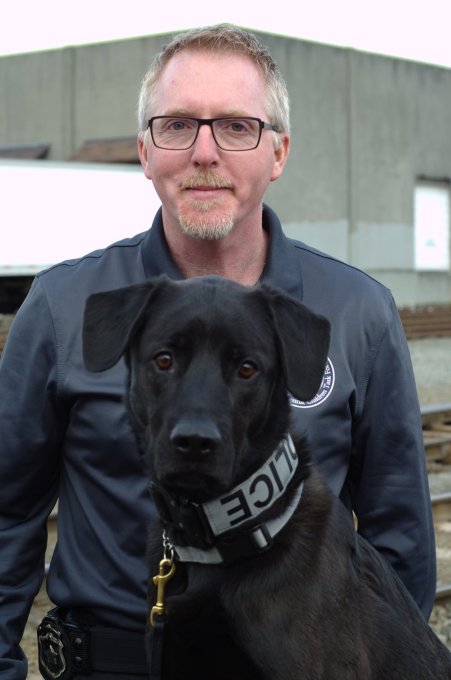 Detective Ian Polhemus and his dog, Bear, work as a team to find digital devices hidden by child-exploitation offenders at crime scenes.

It started with just a couple of cell phones. “No big deal,” Detective Kyburz began.

His instructions were straightforward — extract the data and provide the report to the case detective who, in turn, submitted his findings to the NCMEC.

What was unusual was that NCMEC came right back to the detective and asked her for more information on where the pictures she had submitted in her report came from.

“I provided that information, ”Detective Kyburz said. “We kind of did this whole thing. And it turned out [that evidence] immediately helped rescue a little girl in Australia.

“And it also then broke a little bit more globally, beyond even just the US and Australia. From what I understand, it was kind of a ring of people sharing information and doing this, and they [law enforcement] rescued a few other children in some other countries. All from what started out as just a random case [and] just a few cell phones. ”

Detective Polhemus summed up his deal shared belief by saying that solving crimes against children is a calling. “Every case we investigate involves children… And when you look at wanting to make a difference, the most vulnerable parts of our communities in my opinion are children and the elderly. So anything that we can possibly do to positively impact the lives of those particular parts of our community I find very rewarding. ”

The incredible work that Captain Edwards’ team is doing represents the kind of dedication taking place in ICAC units all across America. Like so many good police units, their work largely goes unheralded. When it comes to making our world a safer place, however, these officers are true heroes.