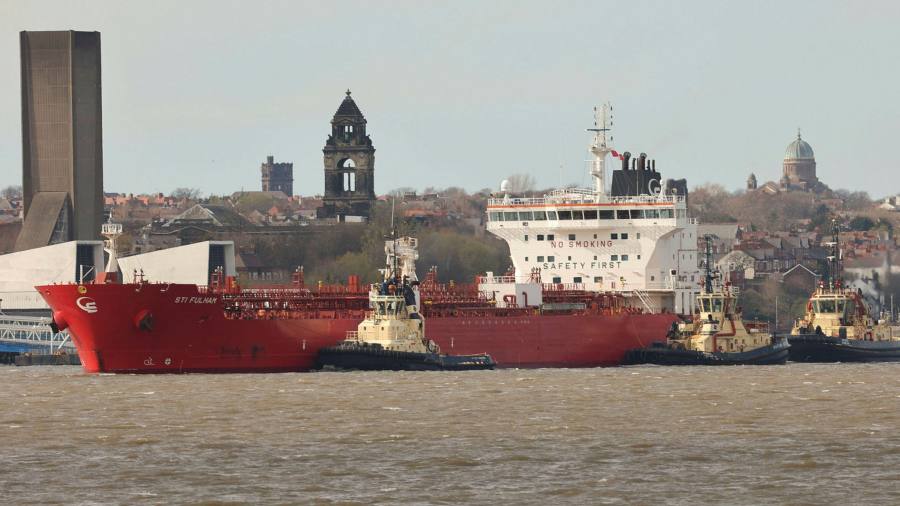 Brokers and underwriters gathered this week in Lloyd’s of London’s historic underwriting room to celebrate the Queen’s platinum jubilee, twice ringing the Lutine bell – a symbol of the insurance market’s shipping roots that was traditionally struck once to mark a lost vessel and twice for its safe return .

A different kind of peril now faces the centuries-old market after the UK and Brussels agreed to ban insurance on ships carrying Russian oil as they ratchet up sanctions on Moscow over its invasion of Ukraine.

The move threatens to shut down one of the world’s largest crude producers out of large parts of the maritime export market. Ships carrying Russian oil would rush to find alternative insurance, without which they would face being turned away from global ports.

Russia’s oil exports have largely held up despite western sanctions on its financial system. Industry executives say a co-ordinated insurance ban could change that and address the fundamental problem with the EU’s seaborne oil embargo: Russia can simply redirect its crude elsewhere.

“The impact of a UK and EU maritime insurance ban on ships carrying Russian oil cannot be overstated,” said Leigh Hansson, sanctions partner at law firm Reed Smith. “We’ve seen the impact the insurance ban had on Iranian oil a decade ago, and this could well send Russian oil trade down the same path.”

It is a decade since western governments first prohibited insurers from providing cover for Iranian oil shipments, as well as putting secondary sanctions on third parties that help Tehran circumvent sanctions, capping a broader package of measures and sparking an almost immediate decline in exports.

But targeting Russia, the world’s third-largest oil producer, could have a far deeper impact on global energy markets.

Insurers worry about unintended consequences for the shipping industry and global commodity markets. As they try to make sure they are not falling foul of the underwriting ban, they could overcompensate and pull cover from a wider range of vessels.

“Because these cargoes are moving quite quickly and the insurance is contracted quite immediately, it’s quite hard to do a lot of homework on the provenance,” said one senior figure at Lloyd’s. If unclear, insurers would “tend to default to a slightly harder line.”

That could mean disruption to wider supply chains, including Kazakh oil shipped through Russian ports, as insurers take a cautious view.

Industry insiders expect details on the measures in the coming days. The London market, which covers global risks, has been engaged in a furious lobbying effort since the war began to convince western policymakers to align the timing and substance of their insurance sanctions.

With a ban on insuring or reinsuring Russian aviation and space companies announced earlier this year, policies were announced by western governments on varying timelines with different messages on their scope, sparking an effort by the market to establish a common approach.

Lloyd’s on Wednesday reiterated that it was “working closely with UK and international regulators and governments” to implement sanctions against Russia, noting that its “position as both a market supervisor and insurer allows us to support various foreign policy goals”.

Shipping industry figures believe that an insurance ban would have a serious impact on Russia’s oil industry.

“It’s very substantial,” said Dag Kilen, global head of research at Fearnleys, a shipbroker. “I would expect an immediate drop of Russian oil exports because the sanctions affect long-term contracts. It does not look good at all for Russian exports and the [domestic oil] industry six to eight months from now. ”

One key area of ​​marine insurance is liability cover, which covers shipowners for huge accidents such as oil or bunker fuel spills that can incur multibillion-dollar claims. Without such cover, many ports decline entry.

The maritime sector has its own special insurance arrangements through the International Group of P&I Clubs, 13 protection and indemnity insurers, most of which operate from Europe. They provide mutual insurance coverage for 90 percent of oceangoing tonnage, pooling their risk, and rely on Lloyd’s for reinsurance cover.

Some P&I executives who spoke to the Financial Times said the Iran oil experience would make complying with a Russian ban easier, but others see a Russian ban as adding to an already-crushing compliance workload because of other strictures coming from the conflict.

The EU has proposed a six-month phase-in period for the insurance ban, which could give Russia and interested parties time to sort out alternative cover through less well-developed insurance markets such as India and China, and in Russia itself. Since the conflict began, Moscow has moved to beef up the capacity of its state-owned reinsurer.

In the case of Iran, Tokyo began to offer sovereign guarantees for Japanese vessels carrying Iranian oil. India granted permission for ships to enter its ports covered by certain Iranian underwriters. Iran has its own P&I insurer, Kish, created as western insurers pulled back.

Analysts, however, believe that the state-owned Russian, Indian and Chinese fleets are not large enough to handle all of the country’s oil exports on their own.

Some experts argue that shipping companies looking to move Russian oil could find that insurance capacity outside the UK and EU is insufficient, while ports may not accept ships covered by arrangements outside the International Group of P&I Clubs.

Matthew Wright, a freight analyst at Kpler, said Russia would struggle to maintain the same level of oil exports when the ban comes in, but added: “There are still plenty of tanker owners who can act under the radar. There’s always loopholes and they’ll be exploited. ”