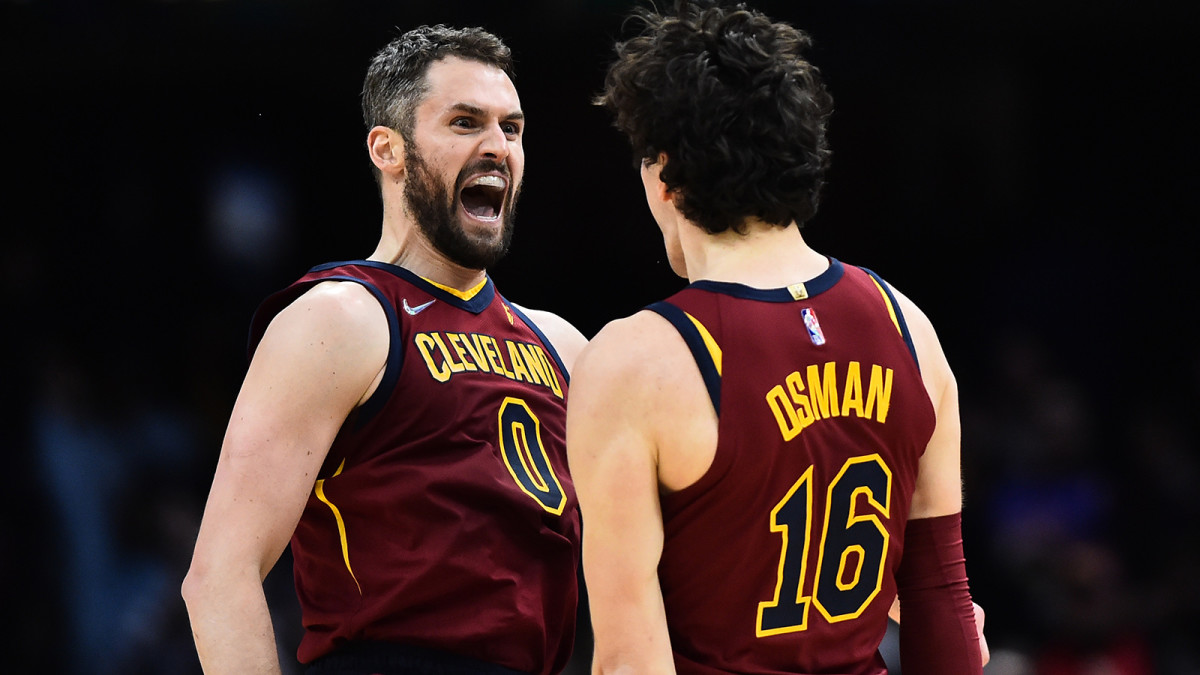 Kevin Love knew he had made a mistake.

First half, Cavaliers-Lakers, and Love’s ex-teammate, LeBron James, came barreling down the lane. Love made the split-second decision to attempt to draw a charge. Whoops. James elevated. This is going to be bad, Love said to himself as he squared up. It was. James slammed home a dunkbarreling over Love in the process.

“He’s so smart,” Love told SI. “We have our 2016 [team] group chat and I’ve been like ‘I’ve been putting my body on the line [all season]. ‘ He’s like, ‘Yeah man, hell of a job taking charges, blah, blah, blah’ but he had that in his mind. He is so smart, cerebral, like a sponge… stepping in front like that, I had no business doing. ”

Love laughs as he recalls the memory. Cleveland lost that game last month. But they haven’t lost many, at least not as many as the Cavs were expected to at the start of the season. Cleveland is 43-36, locked in a battle with Atlanta for the No. 7 seed. They are likely headed for the play-in tournament. For most teams, that’s cause to grumble. For the Cavs — who have not won more than 31% of their games since James left town in 2018 — it’s a reason to celebrate.

Are there any better stories this season than Cleveland? The Cavs aren’t just good — they’re fun. Darius Garland is an All-Star. Jarrett Allen, too. Evan Mobley is a leading candidate for Rookie of the Year. Love, a reserve for the first time since his rookie season, is in the mix for Sixth Man.

Collin Sexton goes down? Garland steps up. Ricky Rubio tears an ACL? Cleveland finds a way to win without him. A string of second half injuries caused the Cavs to slip in the standings. Before them, Cleveland looked poised to finish among the top four.

“We were expected to win, maybe in the mid to low, maybe high twenties this year,” says Love. “It’s been a lot of fun.”

Love didn’t expect to be in this position. Not in Cleveland, anyway. In 2018, Love signed a four-year, $ 120 million extension. The deal gave Love financial security. Given the Cavs position — Love agreed to terms just weeks after James bolted for LA — it also appeared Love was sacrificing the chance to spend the rest of his prime years competing for a championship.

Love, speaking over a Zoom call to promote a partnership with Milkbone, admits he considered that before he signed the deal.

“I’ve actually had conversations with Draymond [Green] about it, ”says Love. “You lose guys for a season or for so long, like he did with Klay and with Steph, guys that were so monumental and leave such a hole in what you’re trying to accomplish. You go from making the Finals four years straight, to then being at the bottom of not only your conference [but] the NBA, there’s no preparing yourself for that. I had an idea of ​​that’s where we’d be headed and it would be a longer rebuild… I looked at it as, man, this is going to take a long time and there were some good moments, there were some pretty bad moments that I had, both on and off the floor. But for me to be in a landing spot where I’m at now, it’s the most fun I’ve had since the ’15 -16 season, just being around these guys and coming into work every single day. “

Love was forced to adapt to a new role when he was traded to Cleveland in 2014. With this group, he has another one. But while his initial adjustment from All-Star to third star was a struggle, this change, he says, has been seamless. He credits the trust he has with Cavs coach JB Bickerstaff and the mental headspace he was in to start the season.

“JB, he’s like, ‘I want you to play free,'” Love says. “You have the green light… so for me, there was no pushback. And from then on, it took me about, I’d say four to six weeks to really feel right and secure and find out how I was going to play within our group and different matchups and who I was going to be playing with. I’d say around December is where I found myself within that sixth man role. And then it just grew from there. ”

The Cavs see value in Love as a reserve. Love does, too. He’s averaging 13.4 points. He’s shooting 38.4% from three. His per-36 numbers — 21.3 points, 11.3 rebounds — are comparable to what he posted during his All-Star seasons. Next season is the last of Love’s contract. At 33, he is looking for ways to extend his career. Playing with the second unit, Love says, is a way to do that.

“Coming off the bench, I think it can add a lot of time to my career,” says Love. “I feel great. My body feels great. Mentally I feel great. In this league, if you can rebound and you can shoot, you can basically play for as long as you want. I have no [plans on] slowing down or stepping away anytime soon. ”

Love can be a key piece for a contender. And maybe that contender is… Cleveland? The Cavs are on the upswing. Garland, Mobley and Allen are just going to get better. In fact, Cleveland may be a small forward away from competing for a championship. If only there was an elite forward with a strong connection to the city that could help them win one.

Is Love getting any hints on that ’16 text chain that James is interested in a return to Cleveland?

“After 2018, did [I] know he was going to the Lakers? I was like, eh, had some sort of an idea that it was a possibility, like a strong possibility I should say, but no, I don’t see any, ”says Love.” He obviously loves our makeup. He loves our team, he has a special bond with Akron, the city of Cleveland, Ohio. But no, I don’t really get a feel for that as of right now. But you know, with him, it could change. ”

A lot is changing in Cleveland. For the better.

More NBA coverage:
• The Music May Stop Soon In Utah
• NBA Power Rankings: Playoff Stakes for Every Contender
• The Incredible Ways the Grizzlies Are Winning Without Ja Morant

Sports Illustrated may receive compensation for some links to products and services on this website.