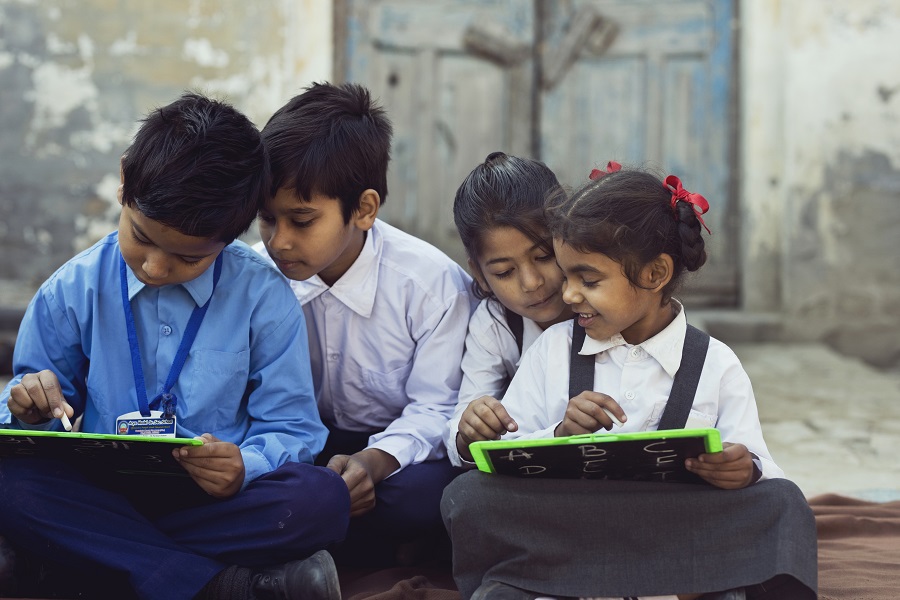 A single upper primary school with classes till standard 8 was the only ray of hope for the 136 students of Dhakadkhedi, a tribal-dominated village under Manasa tehsil of Madhya Pradesh’s Neemuch district.

However, these 63 girls and 73 boys found themselves with no access to education during the pandemic, when schools were ordered shut down and online classes became the new norm.

The village, with a population of 784, is home to 160 families. Manasa, the nearest town and also the tehsil headquarters, is 42 km away. A pucca road connects Dhakadkhedi to Manasa via Kanjarda village. Here, agriculture is the mainstay and a majority of the locals are farm laborers who survive on a meagre daily wage of Rs 150.

Apart from the upper primary school, a student hostel run by the Tribal Welfare Department had been supporting the education of 26 children from nearby villages.

“While parents are apprehensive about getting their young children enrolled at hostels, they do so hoping that they will have a better future,” said Prahlada Solanki, a teacher at a primary school in Dhakadkhedi.

The Madhya Pradesh government came up with three education models to bridge the digital divide for tribal children – DigiLEP, Doordarshan and mohalla classes. However, none of these proved particularly effective for Dhakadkhedi.

Chief Minister Shivraj Singh Chouhan had launched DigiLEP in April 2020 as a ‘Learning Enhancement Program’ that aimed to promote online education in the state. Back then, he sounded certain that this application would be a one-of-a-kind platform that would connect clusters of teachers and students from Class 1 to 8 through WhatsApp groups, allowing them to share textbook-based videos.

“DigiLEP – Aapki Studies, Aapke Ghar is an app made for this purpose,” Chauhan had said, though it remained inaccessible to the tribal students of Dhakadkhedi, and the insubstantial economic state of the locals questioned the efficacy of this online education model.

Of the 63 girls studying in the government school of Dhakadkhedi, only five have an Android phone available at home – the minimum requirement to access DigiLEP. The few who did have access to smartphones could hardly afford to spend on regular recharges for internet use.

Compounding the problem was the lack of consistent mobile connectivity in Dhakadkhedi and the half a dozen nearby villages, with the nearest base transceiver station, or cell tower, in Kanjarda. One had to head for the upper reaches of the village in the hope of catching a network, and even then, it was barely good enough to make a phone call.

Solanki explained: “DigiLEP could not be effective here because people did not have Android phones, and even mobile networks remained patchy. We had tried to give better education to students, especially girls, and had flagged these local concerns to the district education authorities.” As the second education model, the state School Education Department had announced that it would broadcast class-wise lessons through Doordarshan and All India Radio. This medium failed as well in Dhakadkhedi due to the lack of television sets and radios in the majority of the households here.

PS Goyal, district project coordinator of Samagra Shiksha Abhiyan, a government initiative to provide equitable education, said they had apprised authorities about the various problems in these villages that teachers had flagged.

“The district education setup, in the interim, was banking on mohalla classes to fill this vacuum,” he added. “The dedication shown by teachers even in such trying circumstances to teach children and ensure that they are not denied education was worth appreciating.”

These mohalla classes were the third model the state government had come up with. These had looked the most promising for rural Madhya Pradesh. Under this approach, teachers were to ‘take classes of’ school children at two different chaupals, or the village’s gathering places, from 10 am to 2 pm every day. Contrary to the expectations, only five to six students on an average attended these mohalla classes in this remote village.

In these sessions, all the children, irrespective of which class they were studying in, were made to sit together. They would have to wait for their turn as the appointed teacher would attend to each pupil individually. Given the erratic schedules and disconnected learning techniques, parents were not keen on sending their children to these sessions, and students were not enthused by this mode of learning either.

Lack of mid-day meals, sports, and other regular school activities further discouraged parents and their wards from relying on this government initiative.

The helplessness resulting from such lack of resources is evident among parents and children. Nandlal Tawad, one such parent from Dhakadkhedi, said he could not afford to buy a smartphone for his children because of his poor income. As a result, they remained disconnected from their classes during the pandemic. This, and the lack of mobile connectivity, stood in the way of his dream of seeing his children get quality education.

Adding to the problem was how female wards continued to play second fiddle to boys when it came to attending mohalla classes. Solanki acknowledged that in Dhakadkhedi “only a few students had benefited from mohalla classes, that too mostly boys, and that the attendance of girls had remained relatively low”.

According to a policy brief by the Right to Education forum, as many as 10 million girls were at a risk of dropping out of secondary schools due to pandemic-induced reasons such as a downward spiral of family income and digital inaccessibility. Moreover, even pre-pandemic, Madhya Pradesh ranked among the top three states where more than 8 percent of girls stayed ‘out of school’ (dropouts as well as those who never went to school), according to the Annual Status of Education Report ( ASER) 2016.

The need for unaffordable smart devices and fluctuating network connectivity had added to this education barrier manifold in Dhakadkhedi. The nearby villages of Danthalai, Khedabaraji, Kundalia Khurd, Kundaliya Buzurg, Makodi Modi, Gothra and Nayagaon did not fare any better either.

Traditional gender norms tend to push schoolgirl dropouts towards household chores and eventually to marriage. The ASER suggests that the predominant reason for girls to drop out of school is family constraints, and enrolling these girls back remains a struggle.

Dinesh Padaypati, a social worker in Manasa, explained: “We wanted these girls to study. Along with ensuring a proper mobile network, the government should have provided Android mobile phones to girls in these areas, so that they could have continued their studies.” “There is also a concerted effort to educate the rural population about the perils of child marriage, which primarily takes place due to lack of education,” he added. “Despite our efforts, child marriages continue to take place and ruin any chance a girl has to study further.” IANS: