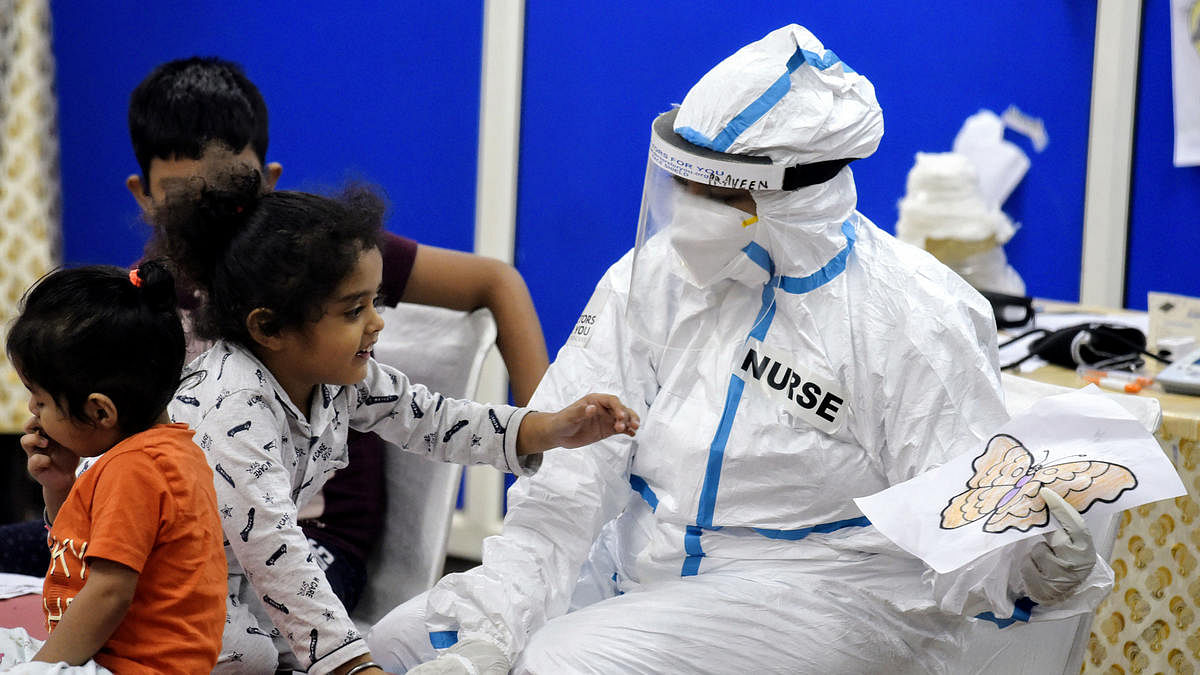 A:round 140 million of India’s rural poor migrate seasonally in search of work. These migrants, who are part of India’s unorganized workforce estimated at over 350 million, move back and forth undertaking a vast array of casual work in the construction, manufacturing, services, and farm sector. They remain excluded from services and rights as workers and citizens, in their rural homes and their places of work (Aajeevika Bureau, 2014). Imagine the case of a family where there is an ailing member or one who is disabled, a family drowning in debt or one with a single parent. Children from such families are more at risk of consuming drugs, indulge in child labor, or even in the flesh trade. For such children, school is undoubtedly a better and safer place for their holistic development.

Indian Government under the RTE Act granted the provision of free education for children from 6 to 14 years of age. Although commendable, several vulnerable children still slip through the cracks and end up in unorganized sectors as child laborers. There are three such groups of children – first are those left behind in the villages by parents employed elsewhere, the second group consists of those migrated with their parents and often engaged in the construction sector, brick kilns, and agricultural sectors, and the third group includes the children who themselves migrate for employment. The children of the first group are dependent on remittances sent back home, so the reduction or elimination of parent’s wages due to the lockdown and limited movement during pandemics have immediate effects on food intake and health outcomes of these children (Unni, 2020). Similarly, the children of the second and third group get directly affected due to the closing down of economic activities. The children in India have been vulnerable for a plethora of reasons during the pandemic and resultant lockdown. The job losses faced by the migrant workers have aggravated the difficulty of these children.

A media report in 2020 highlighted the plight of a teenage boy from Bihar sold to a garment making factory. This boy with others of his age stayed in substandard conditions in a factory in Gujarat and toiled so that their employers would send money for their parents to survive (The New Indian Express, 2020). A study conducted in seven cities on informal worksites revealed the condition of accompanying migrant children, 30% of them never enrolled in schools, 80% did not have access to education, and 90% did not access Integrated Child Development Services (ICDS). Most of the children were found to be dwelling in hazardous and unhygienic conditions (Unni, 2020). The International Labor Organization (ILO) has predicted that with the pandemic, the world may witness a surge in child labor for the first time in 20 years, reversing years of progress in this domain (ILO, 2020).

By June 2021, the number of children who have lost their childhoods has only seen a higher peak. Post the second wave, a new category has been added to the list of the pandemic caused grief – the ‘COVID-19 orphans’. Numerous children have become orphans or now have a single parent after the pandemic. Over 9,300 children have either lost their parents or been abandoned in the COVID-19 pandemic since March 2020 as informed by the National Commission for the Protection of Child Rights (NCPCR) to the Supreme Court (Mathur, 2021). The NCPCR has initiated action and pilot launched mapping of children and families vulnerable to child trafficking and matching them with potential benefits under different Government schemes. The commission has recommended extensive mapping to be initiated in all the districts of all the states which are potential ‘Source’, ‘Transit’, and ‘Destination’ hotspots of child trafficking, as per the information available with Anti Human Trafficking Units (AHTUs) and National Crime Records Bureau (Indian Express, 2021). However, identifying such children will be very important given the vulnerability they might face in the near future with the mere 27% functional AHTUs.

India is home to 40% of undernourished children of the world (Bharthi et al., 2017). Being in school, under the supervision of adults, engaged in play or other learning activities, being fed the mid-day meal (MDM) as provisioned for by the Government addressed many of the vulnerabilities. However, the pandemic and the resultant school closures acted like ripping the Band-Aid off a raw wound. The pandemic has increased the risk factors for child malnutrition. Due to the disruption of Anganwadi services and MDM, numerous children do not have access to regular, nutritious meals. The National Family Health Survey (NFHS) 2019–20 shows the prevalence of malnutrition among children has increased from the previous survey year, 2015–16 in a few states. India may fail to meet targets for improvement in nutrition indicators set under POSHAN Abhiyan (earlier National Nutrition Mission) for 2022, and even the targets set by WHOUNICEF for 2030 (Ambast et al., 2021).

Reports of child trafficking and abuse are rampant, in most cases, there is a direct causal link of the guardians lacking money to sustain their families. Traffckers use the vulnerabilities of families to convince guardians to send their children away on the pretext of job opportunities for a paltry sum of Rs 5,000– 15,000. Post the pandemic, with schools closed, reports of trafficked children have seen a steep rise. Between April and September in 2020, 1,127 children suspected of being trafficked were rescued across India as per Bachpan Bachao Andolan (News18, 2020).

UNESCO (2021) lists out a few consequences of school closure that include interrupted learning, poor nutrition, unprepared parents, confusion and stress for teachers, gaps in child care, high economic cost, rise in dropout rates, increased exposure to violence and exploitation, and so on. Each pointing towards how the world would see a generation succumb holistically, this has far-reaching economic, psycho-social, and political consequences for a country like India. A report stated that India would have to face an economic loss of over 400 billion US dollars in the future and not to mention an entire generation skill-less and as a result jobless (The Economic Times, 2020). Here is a case about one such school dropout who was interviewed during the study (see Box 11.1).

School Systems and Their Poor Preparedness Leading to Vulnerability:

According to Unified District Information System for Education (U-DISE) data 2019–20, there are 1,507,708 schools in India under 17 different types of school management (Table 11.1). For the analysis, the schools are divided into six types:

as described below. Figure 11.3 shows the distribution of students across all types of schools.

Table 11.2 shows that majority of enrolled children study in Type A and E type schools. While Type A schools are Government managed or Government aided schools, Type E schools are private unaided schools. According to a 2019 estimate of the Ministry of Statistics and Program Implementation (MoSPI), 70% of families in India pay less than Rs 1,000 per month in course fees in private unaided schools and only 15.7% of families pay more than Rs 1,500 per month as course fees in private unaided schools (Central Square Foundation, 2020). The unaided private schools pay the salary of teachers from the fees collected from the students and therefore, it can be assumed that teachers of low-fee private schools are paid very little. Given the kind of expense and skills of teachers involved, it is unlikely that such schools where per child payment is less than Rs 1,500 per month, would be able to afford online classes to children. As per:

Table 11.2, if 1% –2% children from Type B and C schools and 15% –16% children studying in private unaided schools get the opportunity of online education during the pandemic years along with a few more from a few states like Kerala, the total percentage of children getting the continuity in their academics is not even 20% which is an alarming picture.

What will be the consequence of the school closure? As per the ‘No Detention Policy’ mentioned in RTE Act, automatic promotion of all children to the next grades is in progress without any academic engagement at least till 8th grade (Right to Education Act, 2009). Figure 11.4 shows these children’s academic standing in May-June 2022 as per their age-specific grades. As most of these children are deprived of any academic engagement due to school closure in two consecutive academic sessions between March 2020 and March 2022, when they will get promoted to the next grade, many of them will have a huge learning gap. Students of a few grades might face more difficulty to manage because of the shift in terms of the expected level of learning. The students entering adolescence need a unique nurturing method. The psycho-social space of students needs to be considered as the most important factor while re-integrating them in the schooling process after the gap of two consecutive academic years.

This excerpt from ‘Covid-19 Pandemic, Public Policy, and Institutions in India’ edited by Indranil De, Soumyadip Chattopadhyay, Hippu Salk Kristle Nathan, and Kingshuk Sarkar has been published with the permission of Routledge Research in Public Administration and Public Policy.