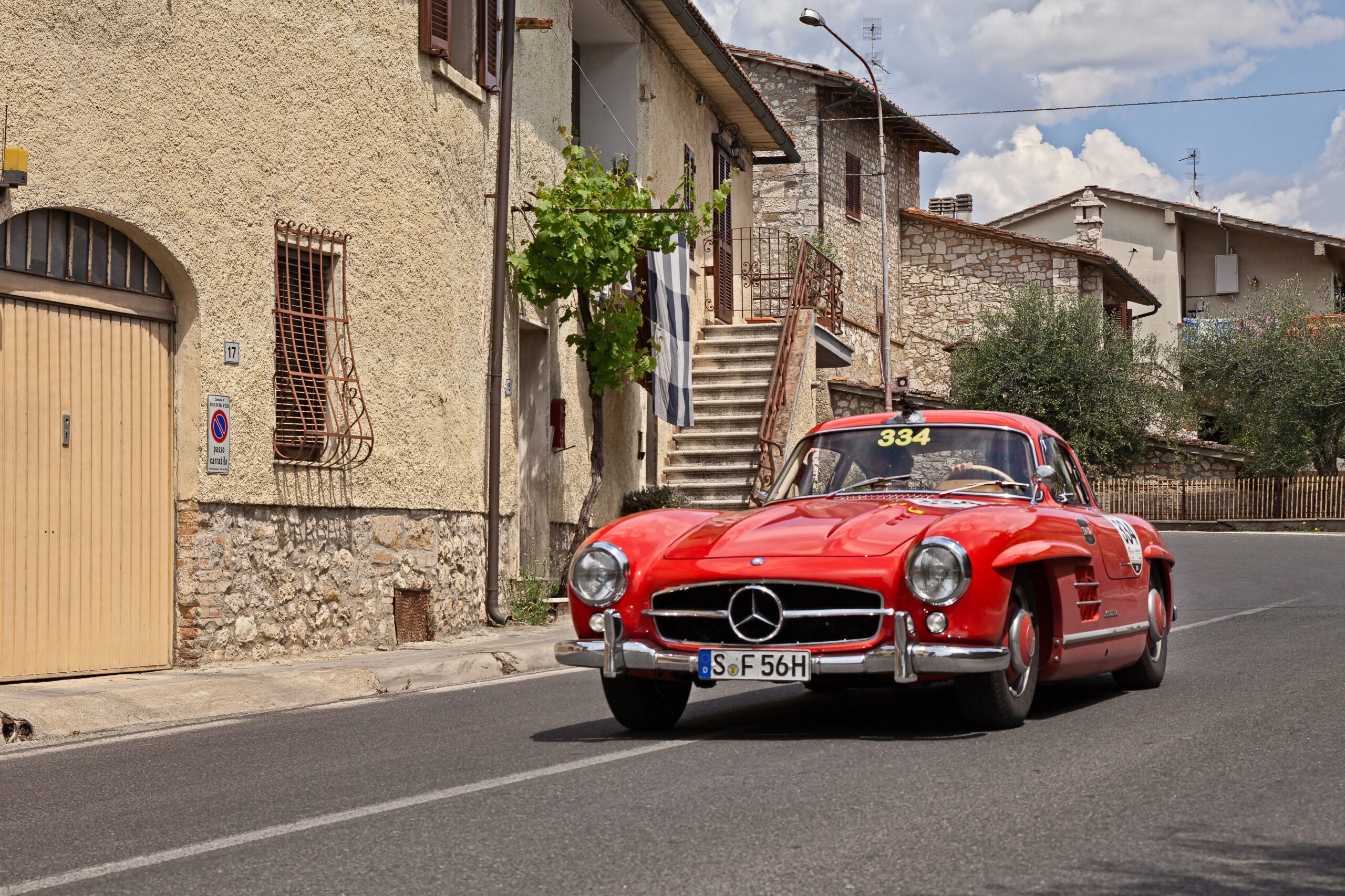 On May 5, a 1955 Mercedes-Benz 300 SLR Uhlenhaut Coupe sold for $ 142 million during an auction at the Mercedes-Benz Museum in Stuttgart, Germany. It was the highest price ever paid for a car at auction, soundly beating the eight-figure Ferrari sales that had long topped the blue-chip billing.

The identity remains a mystery of the person who bought the one-of-two silver stunner with gullwing doors and shiny exhaust pipes protruding from its right side. Notwithstanding persistent industry rumors, representatives for Ernesto Bertarelli, a Swiss-Italian billionaire, have strongly denied to Bloomberg that the longtime Mercedes-Benz connoisseur made the lucky bid.

“The buyer is an enthusiast first and foremost, and not an investor,” says Simon Kidston, who placed the winning bid on behalf of a client, whom he declines to identify. “It is somebody who loves the car. The buyer has never once asked me what I think the car might be worth in the future. ”

What is certain is that an object of such value will require a rock-solid insurance policy — if the new owner plans to drive it. Technically, if the car is never driven it will not legally require insurance, according to analysts from Hagerty, a firm that provides insurance for collectable vehicles and collections that are valued as high as $ 1 billion.

“There are some parts of the world where people won’t insure high-value vehicles,” says Jack Butcher, Hagerty’s president of global markets. “They want to keep them off the books.”

A spokesperson for Mercedes-Benz said the company would not comment on insurance with regard to the record-setting coupe. But according to Abe Barnett, vice president of Signature Services, Hagerty’s highest-end insurance segment, the most obvious bet for the new owner would be to protect it under an inland marine insurance policy, which covers high-value items typically excluded in proper coverage. .

Numerous factors go into finalizing the rates and structure of such a policy — things like location, storage, and vehicle type — but in general, insuring a $ 100 million vehicle costs well over $ 100,000 to insure annually.

“That would treat it essentially like a piece of jewelry or art,” says Barnett. “It provides a much broader form of coverage, as opposed to a standard auto policy, which would be comprehensive and collision coverage. When they take their vehicle around, whether they want to take it to a competition or take it on a road rally or tour, that policy will cover it appropriately. ”

Galleries and art fairs often use this form of coverage to protect paintings, sculptures, prints, collections, and cultural artifacts, and elite garages do it with cars. This includes protection from damage or loss due to theft, accident, or mishandling, or in the event of an undetermined cause for property to have gone missing. It would also help meet the costs to repair or replace property damaged by fire, wind, hail, or water.

Inland Marine policies do not, however, cover damage from war, nuclear or otherwise. They do not cover mechanical failure or issues that happen due to regular use, such as tire blowouts, hose repairs, or brake replacements. If you (or, more likely, your garage manager) should forget to change the oil in your multimillion-dollar Mercedes, that’s on you. Yearly upkeep on such vehicles can cost tens of thousands of dollars in storage, fuel, parts, and service.

“It’s customary for insurance generally not to try to insure what they consider normal wear and tear,” Butcher says.

How Much Is It Worth… to You?

The preservation or restoration of a single million-dollar vehicle can enhance its value significantly, although this wasn’t the case with the Uhlenhaut Coupé.

“Given that the car has always been a jewel of the Mercedes-Benz Museum, it has always been meticulously maintained in outstanding condition,” Haynes says. “There was really no work to be done on the car prior to it being offered for sale, as far as we are aware.”

For vehicles that do need work, the insurance provider will often check in with high-net-worth owners on a quarterly basis to determine the progress of the project and adjust the value of the insurance policy accordingly.

How and where the car will be stored will probably affect the price of the insurance policy more than anything else. “Many wealthy people live in beautiful areas that tend to be catastrophically exposed,” Butcher says, citing private islands, forested mountains, and sheer cliffs.

Keeping a vehicular asset away from wildfire areas and hurricane zones is vital. So is storing it in a temperature-controlled environment with effective security cameras, burglar alarms, and sprinkler systems that can spray fire-retardant foam. Some collectors go so far as to preemptively clear brush in a radius of 200 feet around where they store the car and to dig retaining ponds to dampen flames should a fire creep close — anything to protect the investment.

An additional consideration: “Insurers will want to know the age of people likely to drive it,” Kidston says. “And if the car is being transported, they will often ask that there are two drivers on the truck and that it’s not left unguarded for any period of time.” Transport typically runs from $ 2,000 to $ 10,000 or more, depending on whether the vehicle is being transported via a flatbed truck, a covered carrier, a boat, or a cargo plane.

A deductible typically does not apply in cases of ultra-rare cars. If an owner insists on one, it could be 1% or 5% or 10% of the total insured value of the car, Butcher says. Having a deductible is one way to avoid having to submit an insurance claim for smaller incidents such as dings or cracked wheels.

As with your everyday car insurance policy, not having to submit a claim helps keeps the insurance premium as low as possible. “Not a crazy amount, but it lowers it enough,” says Barnett. (A single claim on a policy would probably not increase rates.) Ethically, anyone selling a vehicle should disclose even small incidents that happened to it — whether or not the incident was reported to insurance.

Rising From the Ashes

Even if the unthinkable happens and the car is damaged in a catastrophic event like a plane crash or flood, not all will necessarily be lost — assuming it can be repaired.

“Of course, nobody likes that in a car’s history, but at least the car isn’t a complete write-off,” Kidston says. With extreme damage, the owner would converse with the insurance company about reducing the car’s value, pending restoration.

In rare cases, car values ​​have risen to greater heights after superficial damage. In 2019 in Durham, NC, a gas pipe exploded in front of a warehouse storing roughly half of the prestigious Ingram Collection of cars. An extremely rare 1961 Porsche 356 B Carrera GTL Abarth — so valuable that an original toolkit alone is worth it $ 10,000—Was one of many vehicles harmed when the roof collapsed.

Call that a triple crowned comeback and then some — with the help of a stalwart insurance policy.