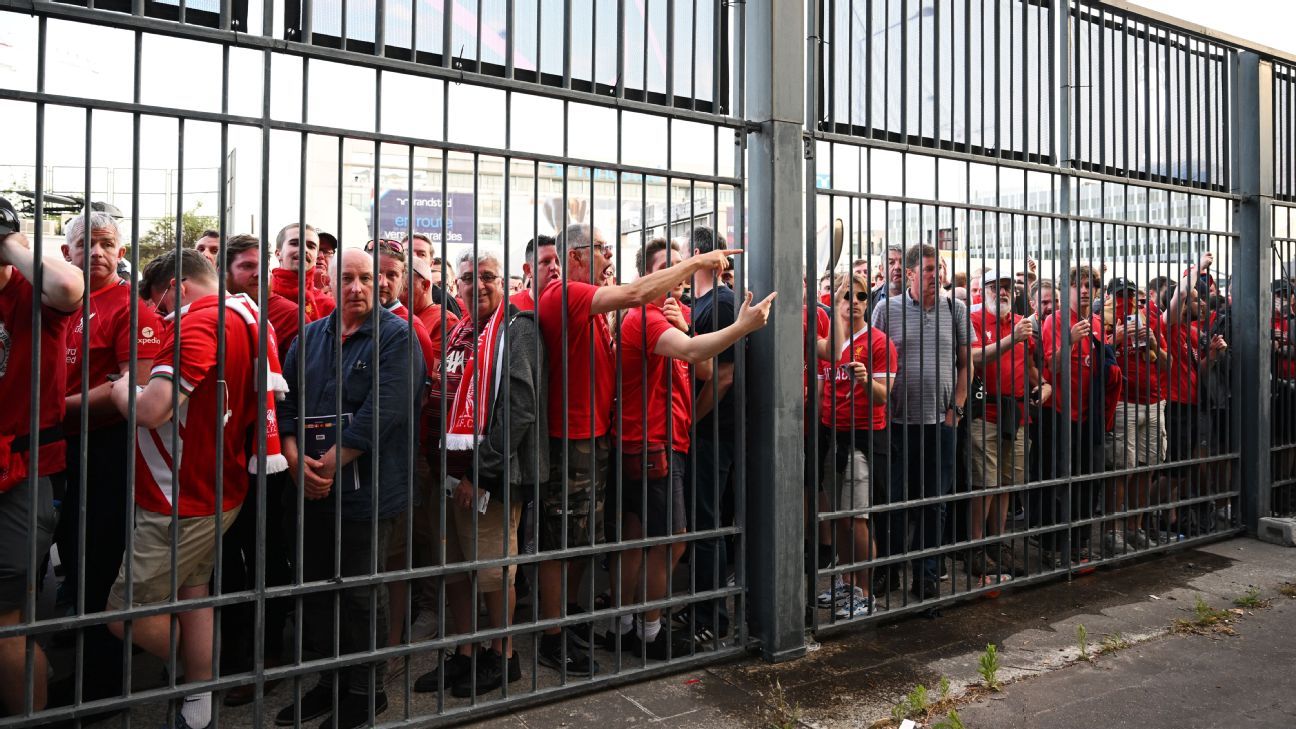 France’s sports minister said on Monday that Liverpool fans without valid tickets were responsible for the initial crowd problems at the Champions League final, with the problem then exacerbated by local youths trying to force their way into the game.

The crowd trouble at the match in Paris has become a political issue ahead of the French parliamentary elections in mid-June, and the French government hosted an emergency meeting on Monday to discuss the crowd trouble.

“What we really have to bear in mind is that what happened first of all was this mass gathering of British supporters of the Liverpool club, without tickets, or with fake tickets,” French sports minister Amelie Oudea-Castera told French radio RTL before the meeting.

“When there are that many people by the entrance to the stadium, there will be people trying to force their way in through the doors of the Stade de France, and a certain number of youths from the nearby area who were present tried to get in by mixing in with the crowd. “

The match had to be delayed by 35 minutes after police tried to hold back people attempting to force their way into the national stadium without tickets, while some ticket holders complained that they were not let in.

More than 100 people were arrested after the crowd trouble, French Interior Minister Gerald Darmanin said. He also said that Liverpool had provided supporters with paper tickets, and not electronic, which allowed for the possibility of what he described as a “massive fraud on an industrial scale.”

Darmanin said there were 29 arrests around and inside the Stade de France, of which half he said were “British citizens,” and a further 77 arrests in the surrounding Seine Saint Denis Paris suburb, not involving British citizens.

Darmanin added that while French authorities had taken steps to prepare for the risk of issues, they were caught off-guard by local youths who also turned up to cause trouble at the match.

“The footage from the Stade de France this weekend was deeply upsetting and concerning. We know many Liverpool fans traveled to Paris in good time … and we’re hugely disappointed by how they were treated,” the spokesman said.

Television footage showed images of young men jumping the gates of the stadium and running away from security to get into the match. Others outside, including children, were tear-gassed by riot police, a Reuters witness said.

“We need to take all the necessary steps to make sure this never happens again,” Oudea-Castera said at the start of the meeting.

“The images are lamentable, they are disturbing because we can clearly see that we are not prepared for events such as the Olympic Games,” said far-left leader Jean-Luc Melenchon on Sunday, while his far-right rival, Marine Le Pen , called the incident a “humiliation” for France.

Far-right politician Eric Zemmour also said the trouble was caused principally by local youths from the nearby Seine-Saint-Denis district, rather than Liverpool fans.

Chris Philp, Britain’s minister for technology, said he was shocked by the images.

“I was horrified to see those pictures of fans including children, disabled fans, being pepper-sprayed by French police,” he said. “And from the pictures I saw there was no obvious justification for that kind of behavior.”

The chaotic scenes were branded a national embarrassment in France, which is due to host the 2023 Rugby World Cup and the 2024 Olympic Games.

Oudea-Castera said that there were no problems with Madrid supporters at Saturday’s match and that the Spanish side had managed to control their traveling fans better than Liverpool.

She added that France nevertheless had to examine stepping up security at high-risk football matches, with further trouble having broken out on Sunday after Saint-Etienne were relegated from France’s Ligue 1.