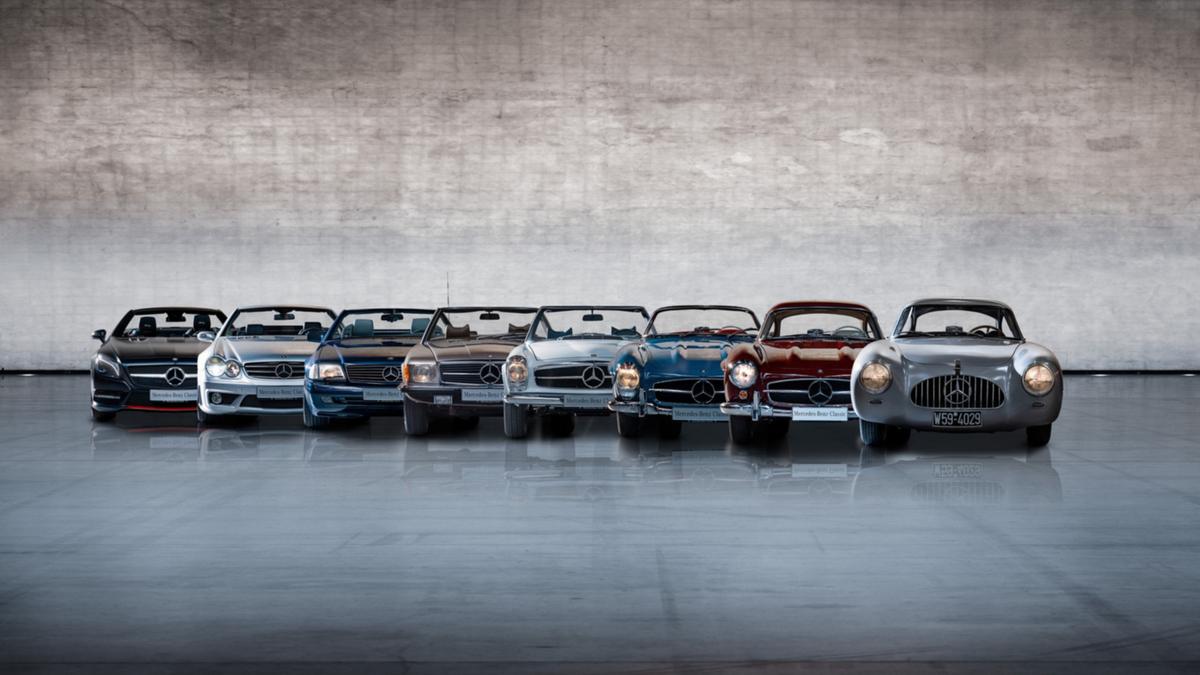 Mercedes-Benz is marking seven decades of its luxury performance sports car, which is now in its latest generation with the new Mercedes-AMG SL.

The two letters stand for “super-light”, with the 300 SL (designated W 194 in Mercedes-Benz’s manufacturing model code system) motorsport car that debuted in 1952 the forefather of a grand automotive tradition built on track DNA that inspired the legendary “ gullwing ”300 SL Coupe (W 198) and open-top Roadster 190 SL in 1954.

Only 1400 gullwing coupes were built, the characteristic doors hinged on the roof due to the roll cage.

For the 1953 season, the W 194/11 racing sports car prototype was built, but not used again because of preparations for entry into Formula One, although it represented an important technical step on the way to the W 196 R and W 196 S racing cars in 1954 and 1955.

In the middle of all this, demand for production models was high, with the 300 SL Roadster (W 198) superseding the gullwing coupe in 1957.

Only 1400 gullwing coupes were built, the characteristic doors hinged on the roof due to the roll cage.

In technical terms, the roadster was similar to the coupe, but by modifying the side parts of the roll cage, the entry height could be reduced to such an extent that normal, front-hinged doors could be realized.

Both were created on the initiative of Austrian-born Maximilian Hoffman, who imported vehicles into the booming postwar US market often based on suggestions to manufacturers of what dealerships thought customers might like.

The vehicles were built to Hoffman’s specifications and the deals were reportedly done on gentleman’s terms secured with a handshake and no written contracts.

The optional hardtop with high windows and concave-shaped roof supported by narrow pillars was reminiscent of Asian temple buildings, which quickly earned it the nickname “Pagoda”.

The SL models in the R 107 series made their debut in the spring of 1971 and, for the first time in the history of the Mercedes-Benz SL, eight-cylinder engines were used in the 350 SL and 450 SL models.

In 1974, the 280 SL followed with six-cylinders, making three engines part of the range for the first time – and the crash performance of this open-top two-seater car was way ahead of its time.

Mercedes-Benz presented the next generation SL, the R 129 model series, at the Geneva Motor Show in 1989.

Its automatic roll bar, which popped out in just 0.3 seconds even with the hardtop closed, was a hallmark of the industry – and the 12-cylinder top-of-the-range models, the 290kW 600 SL and the 386kW SL 73 AMG with 7.3-liter V12 engine, are legendary.

Mercedes-Benz hit the bullseye with this series and production capacity was fully booked, leaving some customers accepting delivery periods of several years.

In 2001, the next SL generation R 230 series was unveiled, its most striking innovation the folding vario roof made of steel which, for the first time in the history of the Mercedes-Benz SL, enabled both an open top and a coupe in one , taking just 16 seconds to slide back or close.

The design of the R 230 model series combined tradition and the future with striking details and saw the AMG share of this SL generation growing significantly so that almost a third of all R 230s had AMG engines. The top of the range was the SL 65 AMG Black Series rated at 493kW.

In January 2012, to mark the SLʼs 60th birthday, the R 231 model series was unveiled at the North American International Auto Show, in Detroit, and one focus of the new design was on reducing the weight of the car with an all-aluminum body , which saved 140kg. It also had, available on request, a “magic sky control” glass roof with adjustable tint and transparency.

The new Mercedes-AMG SL (R 232), developed in the AMG factory in Affalterbach, Germany, and unveiled in 2021, is the latest reissue of an icon.

With a classic soft top and sporty character, it kicked off with two models featuring AMG V8 bi-turbo engines and fits seamlessly into the brilliant history of one of the world’s iconic cars while at the same time being suitable for everyday use as a 2+ 2 seater that has all-wheel-drive for the first time.