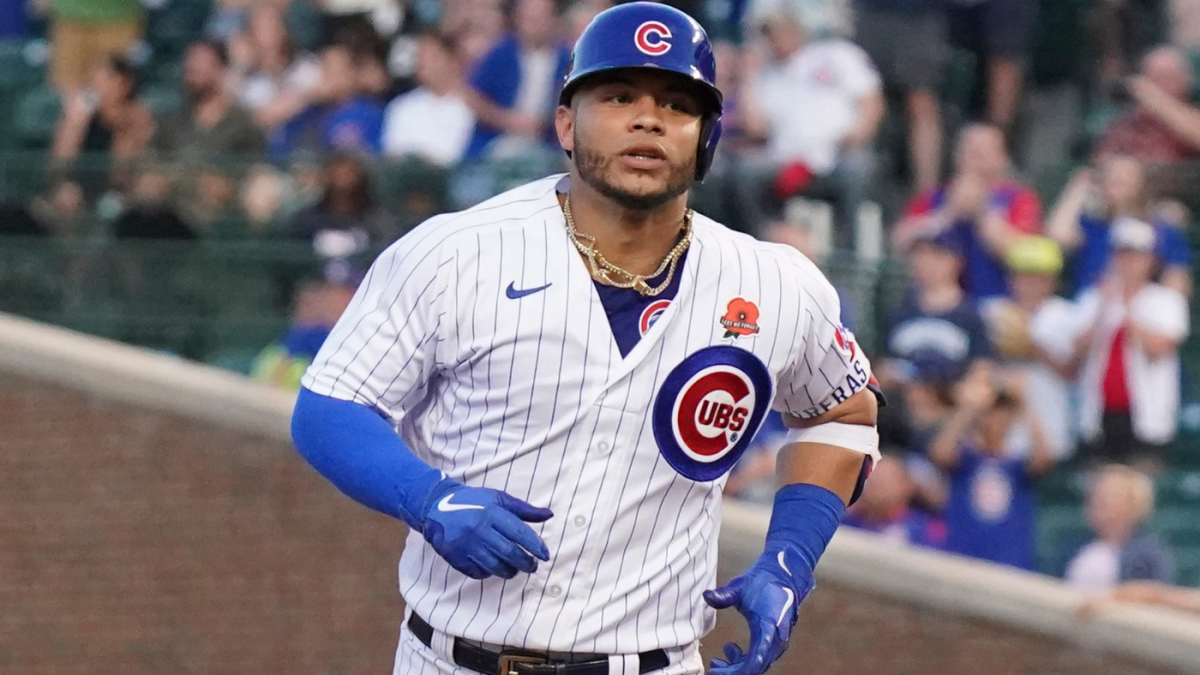 Major League Baseball’s trade deadline will fall later than normal this year, a result of the owner-imposed lockout causing the season to be delayed. Rather than passing on July 31, as is custom, this year’s deadline is set for Aug. 2 at 6 pm ET. That is, for those who hadn’t noticed, exactly two months from now.

Some might read that sentence and declare it too early to think about which players could be available on the trade market. Rest assured, we are not to be included in that grouping. As such, below you’ll find 10 players who CBS Sports has identified as legitimate deadline trade candidates.

We’ve been legally advised to note that a player’s inclusion does not mean they’re guaranteed to be moved ahead of the deadline. Likewise, more than 10 players will be traded by then, so don’t fret if your favorite candidate is absent.

With that out of the way, let’s get to the premature speculation. (The players are listed in alphabetical order.)

Bednar, not Bryan Reynolds or José Quintana, is the lone Pirates representative on this list. (For whatever it’s worth, we don’t think Quintana gets moved if he continues to be even somewhat effective.) The Pirates are rarely under the national microscope (for good reasons, anyway), so you can be forgiven if you haven’t noticed that he’s sporting a 1.97 ERA and a 4.67 strikeout-to-walk ratio in 82 appearances with the Pirates dating back to last season. Our belief is that bad teams aren’t aggressive enough when it comes to moving their good relievers. In this case, it’s true that Bednar won’t qualify for arbitration for another year, but it’s unrealistic to expect him to be part of the Pirates’ next playoff team. (Heck, the attrition rate on relievers is such that he might not be part of the Pirates’ next mediocre team.) Trading him for someone who might be, then, should be in play earlier than seems necessary. Possible fits: All contenders.

Between Bell and Nelson Cruz (whose ball-tracking metrics are more encouraging than you’d think), the Nationals could dictate the market when it comes to immovable bat-only types. While Bell may not be the image of grace at the cold corner (or on the basepaths, for that matter), his two seasons in DC have seen him hit .271 / .355 / .458 (127 OPS +) with 31 home runs in 194 games. Bell does have something notable going on under-the-hood so far this season, as both his strikeout rate and his power production have plummeted. He’s making contact at a rate that puts him in company with the likes of José Altuve, Tim Andersonand Nicky Lopez … Or, three middle infielders who have and can flirt with a batting title. Teams usually desire more power from their first basemen, so it’ll be interesting to see if Bell’s metamorphosis continues, and if it costs him potential suitors. Possible fits: Red Sox, Twins, Giants.

The Royals’ offense has underperformed to such an extent that Dayton Moore, historically as loyal as any executive in the business, fired his hitting coach two weeks ago. Benintendi, a free agent at the season’s end, did his part to keep Terry Bradshaw employed. He’s hit .328 / .395 / .424 (138 OPS +) so far with improved strikeout and walk rates; he’s also hitting nearly half his balls onto the dirt, which is notable since his career-high groundball percentage for a full season is 42 percent. Benintendi, then, has essentially blended parts of his past form – the contact-and-walks version that was good enough to start for a World Series champion – with the stereotypical Royals approach to batted balls. It’s working for him, and some team will probably take note and ensure they can plug him into the top of their lineup come August. Possible fits: Cardinals, Blue Jays, Braves.

Castillo wasn’t traded away as part of the Reds’ mini-fire sale over the winter, and then he missed the onset of the season because of some shoulder trouble. Ruh roh. The good news is that he’s performed solidly in five starts since returning to the mound, including last time out, when he hit out 10 Red Sox hitters across six one-hit frames. Castillo’s velocity is down by more than a mile per hour, however, and he’s had a few starts this year where he just hasn’t missed many bats. Some contenders will be more than willing to look past those issues, but the Reds wouldn’t mind if he records a few more starts like his last one between now and August. Possible fits: Mets, RaysCardinals.

Contreras, a free agent at season’s end, is having one of the best offensive seasons among catchers. He entered Monday batting .271 / .393 / .514 (155 OPS +) with eight home runs. He’s shown growth with his strikeout and contact rates, too, indicating he might be achieving a new true-talent threshold at the plate. Unfortunately, Contreras is also having one of the worst defensive seasons among catchers. TruMedia’s metric has him as the game’s second-worst framer, ahead of only Baltimore’s Robinson Chirinos. For as pleasing as Contreras’ back-picking ways are – and he’s attempted a majors-leading 16, or as many as second and third place combined – his inability to massage the strike zone as a receiver limits his overall appeal. Possible fits: AstrosRays, Yankees.

Mahle’s season has not gone according to plan. He’s sporting what would be the worst ERA of his career as well as what would be his highest full-season walk rate. He’s issuing more walks because he’s throwing fewer pitches in the zone, and he’s throwing fewer pitches in the zone ostensibly as part of a strategic shift to induce more chases. (We think there’s intent because he’s using his splitter as his main secondary offering.) That formula works for Corbin Burnes and for Max Fried, but it hasn’t worked yet for Mahle. Maybe it’ll click soon, or maybe he’ll adjust back to his old approach. Either way, we think other teams will view him as a bounce-back candidate. Possible fits: Mets, Giants, Cardinals.

Mancini chose a bad year to start pulling and elevating the ball at career-high rates, eh? Despite being robbed by Camden Yards’ new dimensions once or twice already, he’s hitting .308 / .379 / .423 (133 OPS +) with four home runs and seven doubles. (Four of those extra-base hits, and one of the home runs, has come at home.) Mancini ranks in the 65th percentile or better in both percentage of batted balls hit 95 mph or harder and within the 10-to-30- degrees window. In layman’s terms: he’s a good hitter. He’s also a free agent at the season’s end, ensuring that Mike Elias’ attempt at a green monster won’t haunt him for much longer. Possible fits: Red Sox, Twins, Braves.

Montas was the only veteran member of the Athletics rotation last season to stick around through the winter. You have to figure he’ll be filing his change-of-address forms soon enough. Although Montas has had a topsy-turvy few years, complete with injury and suspension, he’s settled in since the start of last season. In 43 combined starts, he’s amassed a 120 ERA + and a 3.86 strikeout-to-walk ratio. Montas has lost velocity and has an unusual profile – the slowest pitch he throws on a consistent basis averages 87 mph – but surely some team will pony up to have him front their rotation for next season and a half. Possible fits: Mets, Rays, Twins.

Competent two-way catchers are always a sought-after quantity. Murphy qualifies as just that. He’s a good framer with a Gold Glove Award to his name, and he’s consistently hit for an OPS + in the 90s or better. Murphy will celebrate his 28th birthday in October, months before he has his first arbitration hearing, meaning that he’s both in his statistical prime and controllable for years to come. That’s a nifty combination. The Athletics obtained Shea Langeliers as part of the Matt Olson trade, and it seems like just a matter of time before they flip the switch and install him as their catcher of the present. Possible fits: Astros, Rays, Yankees.

Peralta is an impending free agent who will celebrate his 35th birthday less than two weeks after the deadline, making him an obvious candidate to change addresses. The chances of a trade are further aided by the Diamondbacks’ employment of several talented outfielders, including recent promotion Alec Thomasfuture promotion Corbin Carrolland, when Carson Kelly is healthy, Daulton Varsho.) Peralta is a pure platoon bat whose OPS against right-handed pitchers ranks in the 70th percentile during the pandemic era. For perspective, that puts him in the same neighborhood as Eddie Rosario, who, of course, proved to be a consequential deadline addition last year for the Atlanta Braves. Peralta probably won’t produce as many memorable playoff moments as Rosario did, but he should provide his next team a boost versus righties. Possible fits: Blue Jays, Yankees, Cardinals.