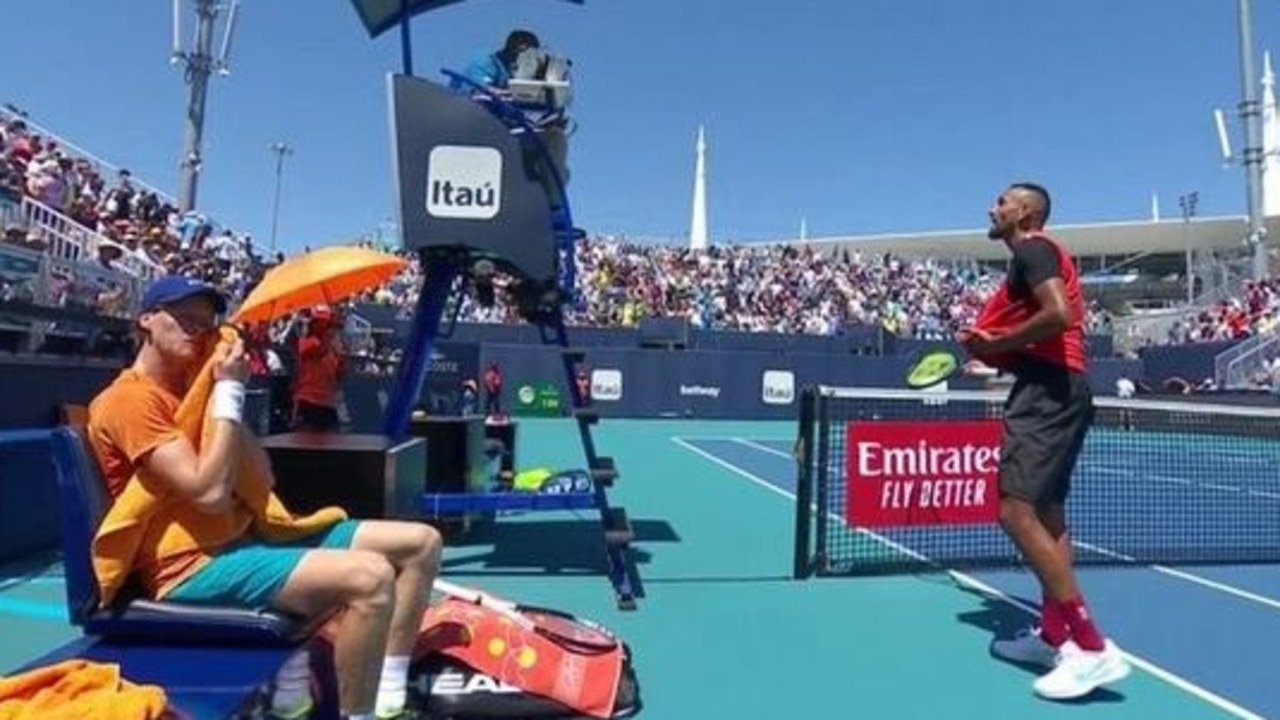 Nick Kyrgios threw yet another wild temper tantrum as the tennis world condemned his antics during a loss to Jannik Sinner in the fourth round of the Miami Open.

The Italian kept his cool as Kyrgios imploded to record a 7-6 (7-3) 6-3 win on Wednesday morning (AEST), opting to steer well clear of his opponent’s gripes to make his way into the quarter-finals.

Kyrgios has been playing some magical tennis in recent times at Indian Wells and then Miami, stressing he is at peace with himself on and off the court – but there was nothing like about his latest meltdown.

As a rally got underway at 4-4 in the first set the umpire’s walkie talkie went off prompting a furious tirade from Kyrgios.

“He should be fired on the spot. “How is that possible? A fourth round of Miami, one of the biggest tournaments and you guys just can’t do your job. ”

“It’s embarrassing. Get a new set of referees, these guys don’t know how to do s ***. Walky-talkies going off. ” Kyrgyz continued his rant,

“It’s a joke. He is a joke. Get rid of every single staff and start over. Everything. I will run the sport. I could do 100x a better job. Marketing. Everything. You guys have no idea. None. You guys can’t even ref right. “

Then, down 3-5 in the first set tiebreak, Kyrgios received a point penalty for unsportsmanlike conduct, then double faulted to give up the set. As Sinner headed back to his seat, Kyrgios launched into a fearsome tirade at chair umpire Carlos Bernardes, who the Canberran has had furious run-ins with before – most recently during his loss to Rafael Nadal at the Indian Wells quarter-finals.

Kyrgios complained he did nothing to deserve a penalty for unsportsmanlike conduct as he yelled at Bernardes, repeatedly cutting the official off as he attempted to explain himself.

“I didn’t even say anything to you,” Kyrgios said. “What? What does that mean?

I was talking to my friend. ”

The 26-year-old obliterated his racquet by smashing it on the ground, receiving yet another code of conduct reprimand that cost him the opening game of the second set, meaning he started 0-1 down.

“What is actually wrong with you?” Kyrgios asked Bernardes. “I just genuinely want to know what’s wrong.”

The chaos continued as a fan invaded the court to try and get a selfie with Kyrgios, prompting security to intervene.

Things didn’t get any better for Kyrgios in the second set, losing 6-3 to cough up the match. According to tennis writer for The Telegraph, Simon Briggs, the world No. 102 times in a blunt request after the match.

“Am not used to being addressed from the court in the middle of matches, but Nick Kyrgios just suggested that I should‘ write about the umpires and how —- they are ’,” Briggs tweeted.

“Felt he was a little hard done-by today, but then in matches like this he is often on the brink of trouble.”

Veteran New York Times tennis correspondent Christopher Clarey was among many to take aim at Kyrgios for his childish behavior.

“Kyrgios has been given plenty of chances through the years and has been cut plenty of slack by the tour,” Clarey tweeted. “He is not a kid anymore. His misbehavior on court is a clear pattern of behavior. ATP is right to crack down. ”

Journalist James Gray said: “Cannot believe Nick Kyrgios has not been disqualified more in his career. Tennis doesn’t have the kind of official abuse problem football has but it’s still damaging for the grassroots game for elite players to act like this. “

Writer Hannah Jane Parkinson said Kyrgios could “never deal with the fact he’s losing so just acts like a child” and called it “so embarrassing”.

Tennis writer Matthew Willis added: “Bernardes standing up to Kyrgios is a good thing. Can’t just hurl abuse at an umpire for half an hour and be surprised when there are repercussions. ”