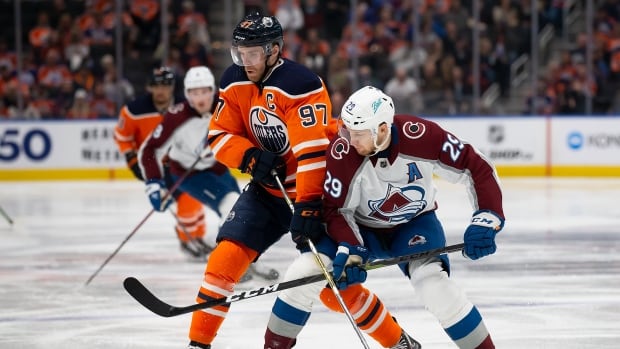 This is an excerpt from The Buzzer, which is CBC Sports’ daily email newsletter. Stay up to speed on what’s happening in sports by subscribing here.

They say all politics is local. Maybe they should say the same about hockey fandom. Once a team is eliminated from the Stanley Cup playoffs, its supporters tend to lose interest in the rest of the tournament. Very few clubs attract a truly national following, and there’s too much bad blood between many of the Canadian teams for their fans to stomach cheering for another.

Connor McDavid’s Edmonton Oilers might be an exception to this kind of provincialism. Among the 25-year-old superstar’s many talents is his ability to command the attention of not just hockey fans, but anyone with the slightest interest in sports. His electrifying performance in the rollicking Battle of Alberta, where he scored the series winner in OT, stole the hearts (and eyeballs) of hockey fans across Canada. It even helped the NHL (however briefly) capture its white whale – the elusive Casual American Fan.

Now, McDavid and the Oilers are set for another viewer-friendly matchup in the Western Conference final against Colorado. The Avalanche are a highly entertaining team that scored the third-most goals in the league this season and feature two of the best (and most exciting) players in the game.

Here are some things to know for the series, which opens Tuesday at 8 pm ET in Denver and can be seen live on the CBC TV network, the CBC Sports app and CBCSports.ca:

McDavid is playing out of his mind. You probably don’t need me to tell you that. But here are a few stats to put his brilliance in these playoffs in perspective. With 26 points in just 12 games, McDavid is more than halfway to Wayne Gretzky’s all-time record of 47 points in a single playoff year. That was set in 1985, when the Great One’s Oilers needed only 18 games to win the Cup. If McDavid’s team can upset Colorado in his first conference-final appearance, he could have as many as 14 games left from here on out, so the record is definitely in reach. Another mind-blowing McDavid fact: when he’s on the ice, Edmonton is outscoring its opponents 25-9 in 5-on-5 play in these playoffs. When he’s on the bench, it flips to the Oilers getting outscored 18-10. Every time McDavid gets out there, he tilts the ice in Edmonton’s favor in ways both seen and unseen. We’re witnessing one of the greatest performances in the history of playoff hockey.

Connor McDavid’s overtime winner lifts Edmonton to a 5-4 victory over Calgary. The Oilers win the 4-1 series and book a spot in the Western Conference final.

Two Oilers might actually break Gretzky’s record. For all the (very much deserved) talk of McDavid’s greatness, Leon Draisaitl has racked up the exact same number of goals (seven) and assists (19) in these playoffs to sit tied with his more-heralded teammate for the scoring lead at 26 points. The New York Rangers’ Adam Fox and Mika Zibanejad are tied for a (very) distant third with 16. Even more impressive is that Draisaitl, who won the regular-season scoring title and MVP awards in 2019-20, is doing all this on a bad ankle. McDavid is still the better player, especially when you factor in defensive contributions (or lack thereof in Draisaitl’s case), but German’s gutsy efforts have been vital to Edmonton’s success. One more Oilers shout-out: Evander Kane leads the playoffs with 12 goals (three more than anyone else) as he reaps the benefits of skating alongside two elite playmakers.

The Avalanche have their own pair of superstars. Nathan MacKinnon and Cale Makar have produced only half as many points as McDavid and Draisaitl in the playoffs (they co-lead Colorado with “only” 13 points in 10 games). But, like the Oilers’ dynamic duo, both are capable of taking over a game at any time with their dazzling skill sets. Makar, 23, was the runner-up for the Norris Trophy last year and seems poised to win several of them after leading all defencemen this season with 28 goals. MacKinnon, 26, was a Hart Trophy finalist the last two years and remained MVP-caliber this season with 32 goals and 88 points in only 65 games. Both MacKinnon and Makar are dazzling skaters whose incredible athleticism can result in highlight-reel goals like this.

Colorado has the stronger supporting cast. The big knock on the Oilers has always been that they surround two of the NHL’s best players with replacement-level talent. That’s still an issue to an extent, but Edmonton GM Ken Holland made a strong addition last summer in ex-Toronto forward Zach Hyman (27 goals in the regular season, eight more in the playoffs) and his mid-season gamble on the troubled Kane has clearly paid off. Mercurial goalie Mike Smith is always an adventure, but he’s played pretty well and has one of the better save percentages in these playoffs. Colorado GM Joe Sakic has done a much better job building a balanced roster. Big-and-skilled Mikko Rantanen (92 points in the regular season) is a great No. 2 forward alongside MacKinnon, though he has only one goal in this year’s playoffs. There’s also captain Gabriel Landeskog, who has 11 points in 10 games since returning from injury for the start of the post-season, and Nazem Kadri, who enjoyed an 87-point regular season and is averaging a point per game in the playoffs.

Bottom line: If so-so goalie Darcy Kuemper can hold up and MacKinnon can play McDavid to something even sort of resembling a draw, Colorado’s depth should give them an edge over the Oilers. There’s a reason the gambling markets are giving the Avs about a 2-in-3 chance of winning this series and have them favored to win the Cup. But ask yourself this: do you really want to bet against Connor McDavid right now?