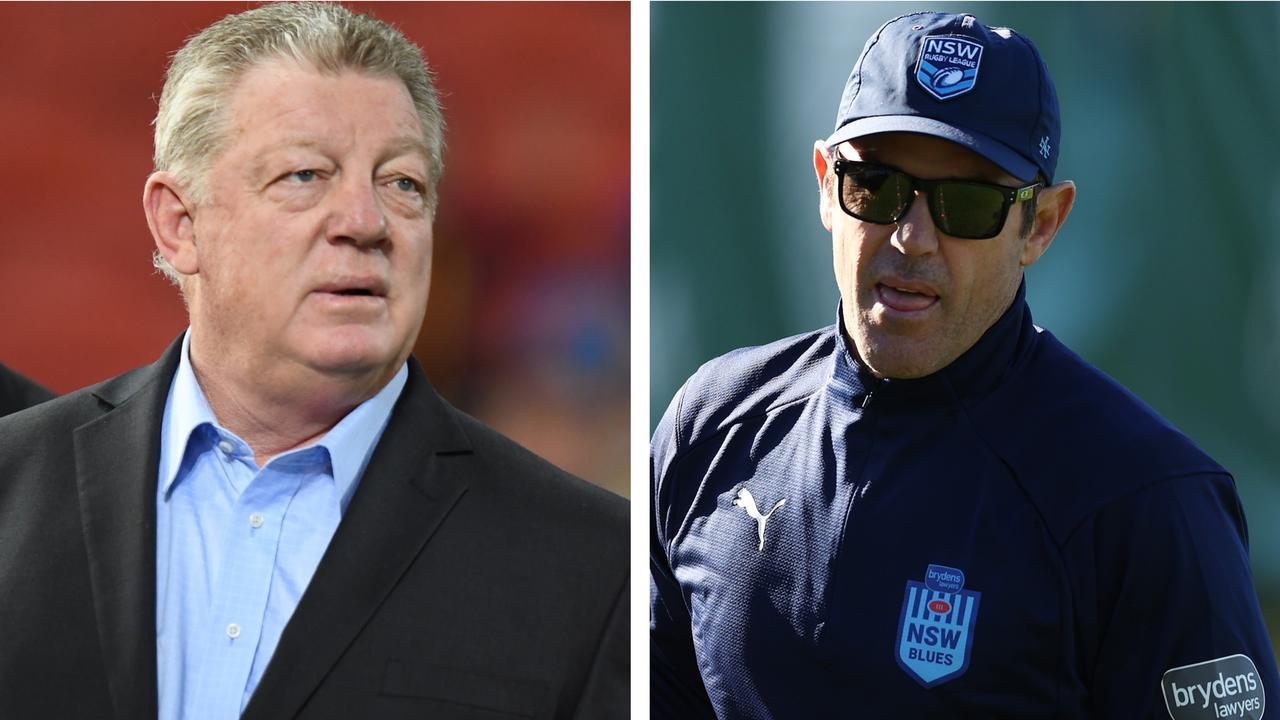 Phil Gould’s denials of discussions with the Bulldogs’ potential next coach has sparked rumors Blues coach Brad Fittler has already agreed to take the job.

Gould revealed he has given the appointment of the next Bulldogs coach “no thought” and denied fielding offers or having any conversations with prospective coaches about the position.

However, Paul Kent believes Gould has contradicted himself with comments he made after Trent Barrett was sacked, which means he probably has a candidate in mind or at the very least has spoken to potential Barrett successors.

“The day he sacked Trent Barrett he said the phone has been ringing hot so I don’t know what’s going on there,” Kent said on NRL 360.

“The other thing is he said he wants a coach by September. So are we waiting for Brad Fittler to finish his commitments with Origin before we decide on who the Canterbury job might be? Or are they going to wait until the last week of September and make a decision then?

‘GIVEN IT NO THOUGHT’: Gould claims ‘nobody has applied’ for Bulldogs job

Paul Crawley doubts Gould would have overseen Barrett’s departure without at the very least having a successor in mind.

“It’s hard to believe a word that comes out of his mouth because he said that and then today he said there’s been no calls,” Crawley said.

“We are two weeks down the track.”

Braith Anasta believes the denials from Gould has intensified the speculation around Fittler potentially taking the job.

“It has left that conspiracy for Freddy open because of the lack of talk or noise around any coaches,” Anasta said.

Kent explained that both Fittler and Gould’s comments on the position are making the possibility of the Blues coach taking over after the Origin series more plausible.

“It makes sense if Brad Fittler has already been sounded out about it,” Kent said.

“That would be a private conversation between Gould and Fittler.

“Fittler has told people around the game that he is interested in coaching in the NRL again one day.

“But when it was put to him about coaching Canterbury specifically, he came back with, I have a job at Channel 9 and I have a job with the Blues and that’s it.

“He wouldn’t talk beyond that period so we are just waiting until the end of the Origin period before that becomes the conversation? In the past that is often how it has played out. ”

Dave Riccio believes the Tigers are taking a leaf out of the Bulldogs book in getting an answer from their next coach before they make a call on Michael Maguire.

“I think the Tigers are learning from what the Bulldogs are doing here,” Riccio said.

“I don’t think the Tigers are going to move on Madge until they have got their answer, knowing that the Bulldogs don’t have theirs.”

Kent noted that Gould has no history of sacking coaches without having a replacement in mind.

“You don’t get rid of a coach unless you know who you’re going to replace him with,” Kent said.

“Phil Gould has never in his life got rid of a coach and not had someone in mind.

“When he got rid of Ivan Cleary the first time around he just went out and got Anthony Griffin. He didn’t interview for the job.

“He just went and spoke to Anthony Griffin and liked what he heard and gave him the job. Then he sacked him. That’s the way it works. ”