Shares of PureCycle Technologies, Inc. (NYSE: PCT – Get Rating) have earned an average recommendation of “Buy” from the six ratings firms that are covering the firm, Marketbeat Ratings reports. One investment analyst has rated the stock with a hold rating and four have assigned a buy rating to the company. The average twelve-month price objective among brokerages that have issued a report on the stock in the last year is $ 24.00.

PureCycle Technologies (NYSE: PCT – Get Rating) last released its earnings results on Tuesday, March 29th. The company reported ($ 0.16) earnings per share for the quarter, topping the consensus estimate of ($ 0.19) by $ 0.03. On average, analysts expect that PureCycle Technologies will post -0.65 EPS for the current fiscal year.

In other PureCycle Technologies news, Director Jeffrey Richard Fieler purchased 714,284 shares of the business’s stock in a transaction dated Thursday, March 17th. The shares were acquired at an average price of $ 7.00 per share, for a total transaction of $ 4,999,988.00. The acquisition was disclosed in a document filed with the SEC, which is available at this link. Also, insider David Warner Brenner sold 225,000 shares of PureCycle Technologies stock in a transaction on Tuesday, March 22nd. The stock was sold at an average price of $ 7.86, for a total transaction of $ 1,768,500.00. The disclosure for this sale can be found here. 11.10% of the stock is currently owned by company insiders.

About PureCycle Technologies (Get Rating)

PureCycle Technologies, Inc. produces recycled polypropylene (PP). The company holds a license for restoring waste PP into ultra-pure recycled resin. Its recycling process separates color, odor, and other contaminants from plastic waste feedstock to transform it into virgin-like resin. The company was founded in 2015 and is headquartered in Orlando, Florida. 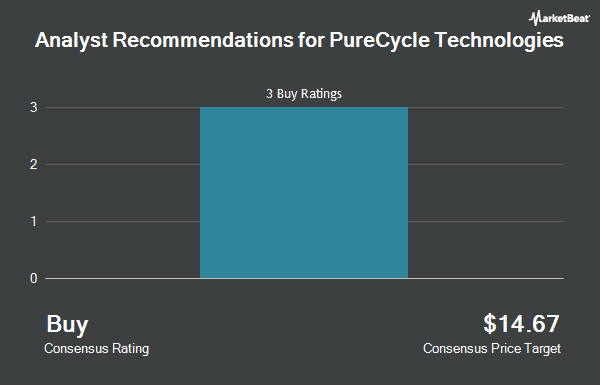