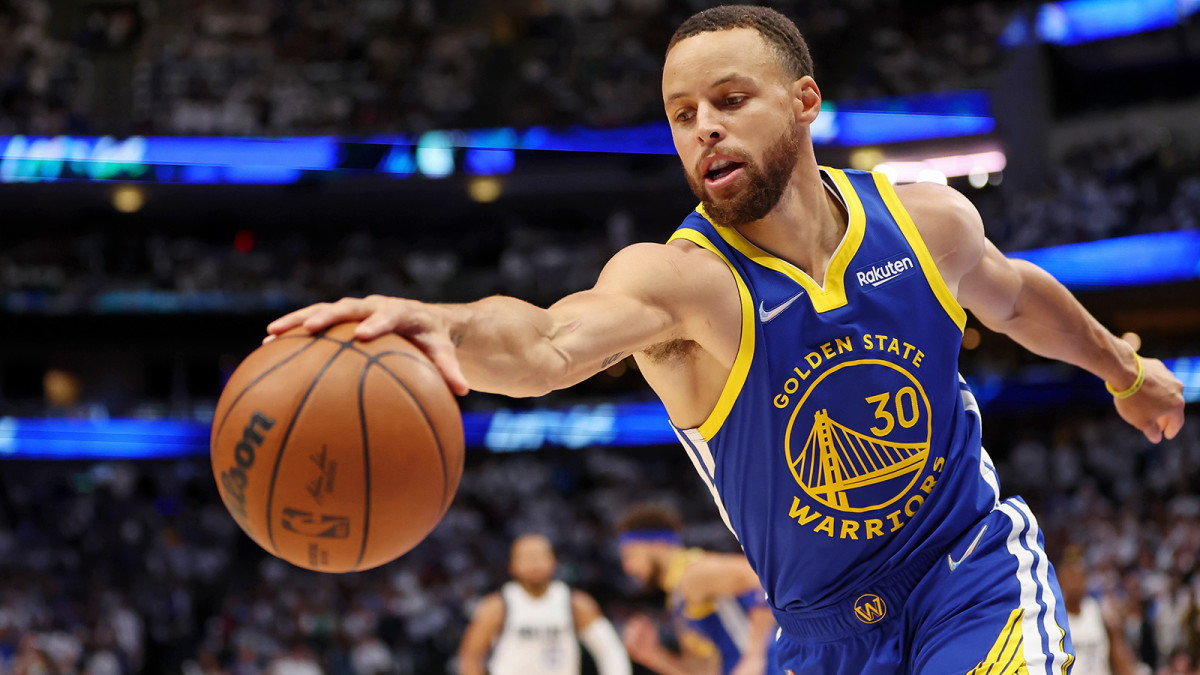 The 2022 playoffs have been filled with its share of blowouts, but we’ve still seen a healthy dose of standout performances. Luka Dončić carried Dallas within three games of the FinalsJa Morant gave the Warriors a run for their moneyand with his back against the wall, Jimmy Butler turned in one of the grittiest playoff performances in recent memory. There remained a wealth of superstar efforts despite the absence of LeBron James and Kawhi Leonard.

The Larry O’Brien and Bill Russell trophies will be handed out in a couple of weeks. For now, let’s take a look in the rearview mirror, sorting through the top 10 playoff MVP candidates ahead of the 2022 Finals.

Apologies to Jordan Poole, Jalen Brunson, Andrew Wiggins, James Harden (kidding!) And Robert Williams for their omissions. We’ll start with Bane at No. 10, who may be the most promising player in Memphis outside of Morant. Bane earned All-Rookie honors last year before an impressive follow-up campaign, including a 43.6% mark from three in 2021-22. Bane continued his strong play in the postseason. Morant’s backcourt mate shredded Utah’s perimeter defense with 23.5 points per game in Round 1, and he helped put a brief scare into Golden State one series later. Back issues limited Bane against the Warriors, further hobbling a hampered roster. Perhaps a healthy Memphis team could pull off the upset in 2023.

This may not be vintage Klay Thompson, but this version isn’t exactly too shabby. He’s shaken off any rust from a 34-month postseason hiatus by averaging 19.8 points per game on 39.9% from three, and he enters the Finals riding high after a 32-point night to send the Mavericks packing last week. Thompson remains an exhausting cover for opposing defenses as he whizzes around screens, and there’s still some explosion left in his legs as he bursts toward the tin. The Thompson of another era was an underrated two-way ace, one who played a key defensive role in the establishment of the Golden State’s dynasty. He’s not quite that player anymore, but Steve Kerr and Co. will be happy settling for arguably the greatest microwave scorer in league history.

I’m willing to reward a five-game sample here given Jokić’s output in a short series against the Warriors. The two-time MVP is the lone player in NBA history to average 30 points, 13 rebounds and five assists in a postseason (minimum four games), and his 37-point effort in Game 4 saved Denver from a sweep. The Nuggets were simply outclassed against the Warriors without Jamal Murray and Michael Porter Jr. We shouldn’t hold Denver’s early exit against Jokic.

Brown isn’t a second banana without his warts, and his turnover struggles could rear their ugly head against Golden State. Yet sometimes the conversation surrounding Brown veers too far into what he can’t do rather than what he brings to the table. The Cal product has turned from a defensive specialist to a souped-up 3-and-D piece over the last half decade, providing a critical scoring punch alongside Jayson Tatum. Brown has 14 games of 20-plus points in the playoffs. He’s shooting a cool 39.4% from three, and he could very well see an elevated role in the Finals if the Warriors look to trap Tatum. Brown has the ability to be an x-factor late in the series. His performance could be a bellwether for Boston throughout the Finals.

There’s a plausible universe in which a healthy Morant and the Grizzlies make a shocking run to the 2022 Finals. The third-year phenom ripped off a combined 115 points in his first three games against Golden State, including a 47-point masterclass in a Game 2 upset. Memphis fought valiantly in the final three games without Morant, but it was no match for the Warriors machine. Luckily for Morant, this is far from his last playoff chance. The maturity he showed on such a large stage portends a bright future through the 2020s and beyond.

Antetokounmpo’s playoff dominance will largely be lost to memory, but he was the most terrifying player on the planet through the first two rounds of the playoffs. Antetokounmpo became the only player in league history to tally 200 points, 100 rebounds and 50 assists in a single series, finishing a round-two battle with the Celtics with three 40-point efforts and a pair of 20-rebound performances. Antetokounmpo’s playoff stat lines are reminiscent of peak Shaq. He’s improving by the year as a playmaker and a mid-range shooter, and perhaps this is a different Finals matchup if Khris Middleton is healthy. Curry or Tatum are likely to hoist the Bill Russell Trophy by the end of the month. Antetokounmpo remains the best player in the world entering 2022-23.

Dončić ends his run just outside the top three on our ballot, although he sports a pretty impressive statistical case. He tallied three 40-point games as he averaged a playoff-best 31.7 points per game, and his decimation of Phoenix in Game 7 was reminiscent of LeBron James’s 48-point masterpiece to beat the Pistons in 2007. The hype train got a little bit out of control ahead of the Western Conference finals, and while it was a shaky shooting exhibition for Dončić, we shouldn’t ding him for facing a revived dynasty with an undermanned supporting cast. Dallas entered 2021-22 looking to take the next step. After winning two playoff rounds, we should consider this season a success.

Tatum has 68 playoff games under his belt entering the Finals just three months after his 24th birthday, and the reps are breeding impressive maturity. Tatum is diagnosing defenses with aplomb in his fifth postseason, finishing Sunday night’s victory with six assists and just two turnovers. Tatum recognized Miami double teams with increased frequency as the series wore on, pinging the ball to crosscourt shooters before hellacious traps forced a slew of turnovers. Such calm under pressure will be critical against Draymond Green and the Warriors.

We’re burying the lede to a degree by highlighting Tatum’s passing chops. His scoring ability remains his calling card, with an improving post-up game creating perhaps the league’s scariest individual scorer. Tatum’s 46-point eruption in Milwaukee saved Boston’s season, though perhaps more impressive is the metronomic nature of Tatum’s nightly performance. He’s scored 25-plus points in 12 of 18 playoff games thus far, and he’s been efficient in all three closeout contests. Tatum is piling up points at the free-throw line and beyond the arc. He’s a nightmare for defenses both on an island and in pick-and-roll action. Butler told Tatumit’s your time”After Game 7 on Sunday. I think he may be right.

The narrative surrounding Curry’s lack of a Finals MVP trophy could end this year, and it’s frankly a bit ridiculous in the first place. Any doubt about Curry’s playoff chops continued to be extinguished in 2022. The three-time champion hasn’t tallied 35-plus points in a single postseason game, though his consistent excellence deserves recognition. He averaged 31 points per game across the final four games against Denver, and he then averaged 7.4 assists against Dallas on 44% from three. He has a fair case for the top spot on this list, and a stronger one if you subtract his shooting struggles against Memphis.

Curry may be past its peak in terms of its historic volume and efficiency from three. But the 2022 version of Curry controls the game as well as he ever has. He’s shooting 57.1% on drives to the rim this postseason (a better mark than Dončić, Antetokounmpo and Butler) and his postseason turnover rate is at the lowest mark of his career. Curry has pivoted into his mid-30s effortlessly. He’s a brilliant playmaker and a historic shooter, one who is in total sync with both his head coach and teammates. Curry has curbed his recklessness in this latest iteration of the Golden State’s dynasty. He could very well have a fourth championship to show for it later this month.

Butler deserved the Larry Bird Trophy for the Eastern Conference finals MVP, but he’ll still land a slightly less prestigious honor here. He turned in a tour-de-force playoff performance just as he did in 2020, this time taking an outmatched squad to the brink of the NBA Finals. Butler dropped 35-point performances six times, including his Game 1, Game 6 and Game 7 scoring outbursts against Boston. He’s now approaching his age-33 season, with significant tread on his NBA tires (thanks, Thibs). But at this point, would anyone bet against Butler carrying Miami back to the conference finals in 2023?

Miami’s star deserves the No. 1 spot regardless of the result of his last-second three on Sunday night. And though I understand the impulse to live with whatever attempt Butler wants in the final seconds, his decision to pull up from three is tough to swallow under further scrutiny. Butler was 7-for-24 from three during this series and a ghastly 23.3% this season. That number gets worse if we sort by above-the-break threes. Butler is a master at getting to the line, and while Al Horford is a nimble defender, it’s hard to see a situation where Butler doesn’t convert a layup, draw a foul or both.

Butler turned in one of the most memorable postseasons of the last decade. He’ll have to live with his Game 7 decision through the summer.