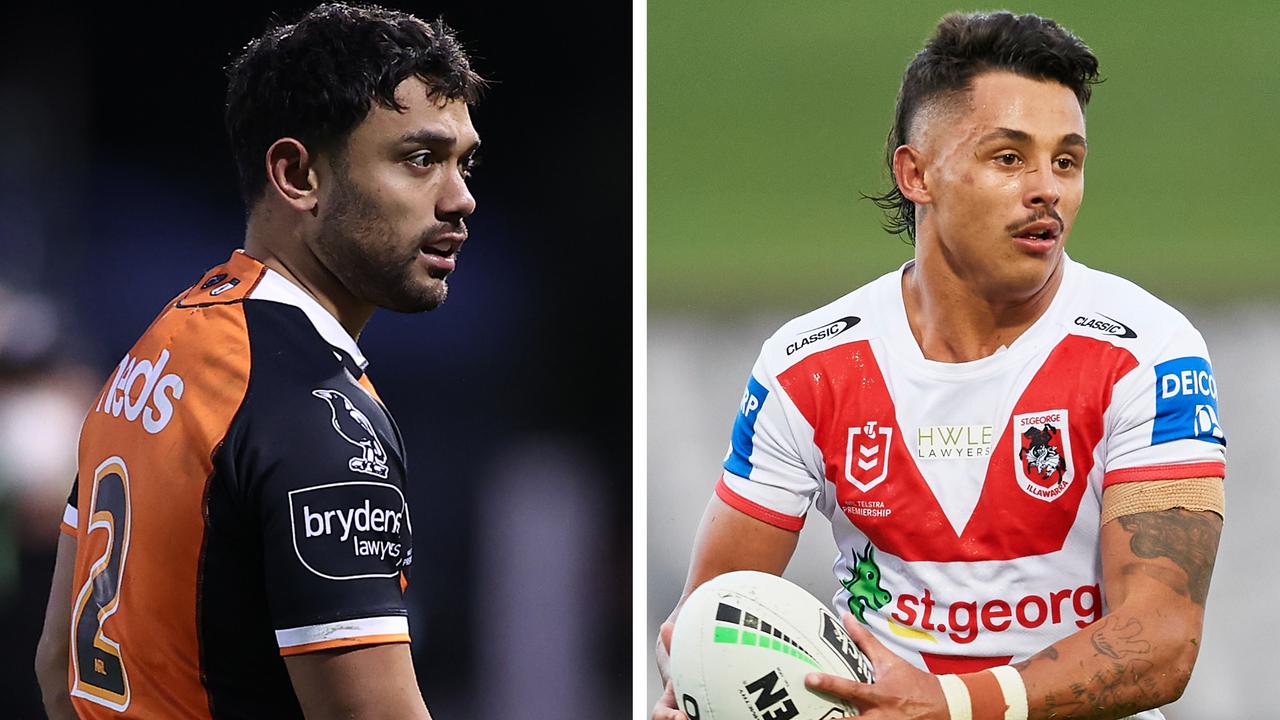 David Nofoaluma returned to the field via the New South Wales Cup and was joined by Tyrone Peachey and Jacob Liddle, with the trio playing a big role in the Magpies’ draw with the Newtown Jets.

Jayden Sullivan took the experience of a month-long stint in NRL back to reserve grade and looked every bit of a future NRL No.7, while Maika Sivo was once again solid for the Eels.

Read on for the latest Reserve Grade Wrap.

ALL EYES WERE ON

Wests Tigers star David Nofoaluma made his return via reserve grade after it was revealed he had been left out of Michael Maguire’s 17 for disciplinary reasons.

The 28-year-old was busy in the Magpies’ 21-21 draw with Newtown, scoring a try, getting a linebreak, three tackle busts and running for 168 meters.

Tyrone Peachey also featured in NSW Cup after being the replacement player for the NRL side the night before. Peachey carved up with a try assist, a linebreak, a linebreak assist, four tackle busts and 149 running meters.

The trio’s performances along with Jock Madden and Nu Brown dropping back helped the Magpies produce their best performance of the season.

It looked as if the Jets were going to escape with the win after Rhys Davies kicked a field goal in the 71st minute, but Madden slotted one too in the 78th minute to seal a draw.

Jayden Sullivan was back in reserve grade after spending a month playing off the bench in NRL. The 20-year-old’s fingertips were all over the Dragons’ 40-22 win over the Bulldogs with three try assists, a tackle bust and 77 running meters.

He was spotted limping after the game but confirmed to Fox League that he was just cramping given it was the first time in while that he had played 80 minutes.

Sullivan also credited Dagons skipper, Ben Hunt – who called him “the best player in the world” – for his performance.

“I reckon it does,” Sullivan said when asked if his composure on Sunday came after spending time in first grade.

“I get to learn, in a different position, how hard it is in the middle, but it’s good to be back footy in the No.7. It feels good and I got to learn off the best player in the world, Ben Hunt. ”

Tyrell Sloan had some nice touches scoring a try and setting up another but his defense was a little shaky with 1 tackle and three misses.

Eels powerhouse Maika Gray spent another week in the NSW Cup as he continues to get back to full fitness after knee surgery. Sivo was a handful in Parramatta’s two-point win over Canberra, scoring a try, getting a linebreak and three tackle busts while running for 130 meters.

Treigh Stewart was a big part of the Dragons’ win over the Dogs, scoring a try, setting up another, getting a linebreak, three tackle busts and running for 111 meters.Stewart – a teacher’s aide away from footy – was a part of the Illawarra Steelers ’2019 SG Ball premiership-winning side with Sloan, Sullivan, the Feagai twins and Talatau Amone.

Jack Gosiewski and Jackson Ford were busy in the win too. Gosiewski scored a try, got a linebreak, a linebreak assist, four tackle busts and ran for 124 meters. He also made 23 tackles with just one miss.

Meanwhile, Ford set up a try, notched up 124 running meters and had two tackle busts.

Locky Miller returned to reserve grade fresh off an NRL debut and was his usual destructive self, running for 210 meters and busting 16 tackles.

Kayal Iro – a regular in these Reserve Grade Wraps – once again ran amok with 237 meters to go with his one linebreak and seven tackle busts.

Their Newtown teammate, Jayden Berrellscored a double and set up another try, while also getting a linebreak and a linebreak assist.

Canberra’s Englishman Harry Rushton was busy on both sides of the ball with 135 running meters and 44 tackles with just one miss in his side’s loss to the Eels.

On the other side of the field, Jakob Arthur played a huge hand in the win, setting up three tries and getting two linebreak assists.

Roosters coach Trent Robinson will have to call on backline reinforcements after Daniel Tupou and Joseph Suaalii were selected in the NSW squad – and there were two that put their hand up while playing for the Bears.

Adam Keighran scored 20 of the Bears’ 32 points after scoring a double and kicking five goals from five attempts. He also ran for 168 meters, got a linebreak and four tackle busts. Interestingly, Keighran spent some time in the game on the wing in preparation for Tupou’s call-up.

Terrell May dropped back to Cup after only getting three minutes in NRL. The Rabbitohs kept him well contained, but he did get a try assist and made 33 tackles with zero misses.

Knights playmaker Tex Hoy continued on with his form, setting up two tries in the Knights’ win and getting three linebreak assists.

Mounties got their biggest win of the season and Josh Ralph, Dylan Smith and Tim Simon all starred – ironically it was against the latter two former club, Blacktown.

Ralph, a halfback, set up two tries, got four tackle busts and ran for 146 meters, whileSmith carved up at fullback with a try, a try assist, a linebreak, two linebreak assists, three tackle busts and 181 running meters.

Simona’s NRL experience was on show as the 30-year-old bagged a double, set up two more tries, got a linebreak, 2 linebreak assists, three tackle busts and 111 running meters.

A crowd of over 1,200 turned out to watch the Magpies and Pride to battle at the Tully Showground. Former Brisbane Souths, Western Suburbs, Illawarra and North Queensland forward Craig Teitzel – the father of NRLW Knights skipper Romy – was there too.

Bulldogs half Brandon Wakeham could be in some hot water after Tyrell Sloan accused him of an eye gouge during Sunday’s clash.

Ladder-leaders Penrith suffered just their second loss of the season after going down 36-26 to Newcastle. But it’s worth noting a stack of players were rested in preparation for NRL duties this week with seven players selected in the Blues squad.