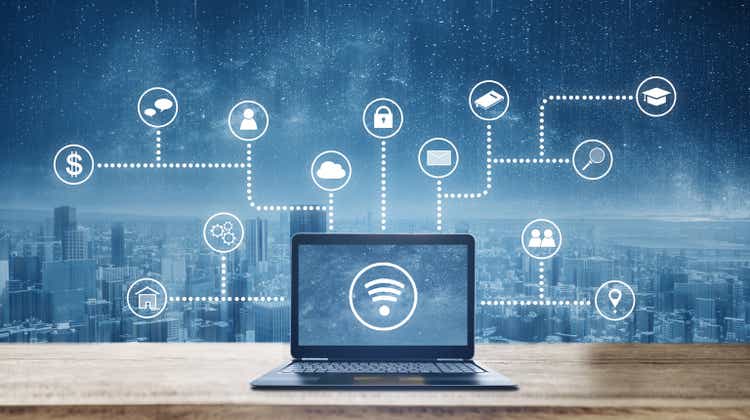 It’s time for an update on Roper Technologies (NYSE:ROP). I’ve been covering the Industrial / Software conglomerate Dividend Aristocrat since mid-2019, and I’d refer readers back to my original thesis for a deep dive on the business model.

Is this a good time to buy stock? And sure, this is a fine enough time. I expect shares to push to new all-time highs above the $ 500 level from last summer as the correction in high-quality stocks lets up:

The stock is currently at an estimated 31x this year earnings and 28x next year. It usually trades closer to 32-33x forward earnings as a median. This is not a big discount, but it’s certainly not rich to its normal levels either.

Roper grows earnings at a double-digit clip. Buy at even the median or a shade below on something that grows this quickly and you’ll usually do well.

I’d repeat a point from my earlier analysis which is that the analysts don’t model in future M&A into their earnings estimates. The 8-10% growth rate you see above is based on the organic growth of existing businesses. Yet, Roper makes acquisitions each and every year, and you can generally pencil in at least 5% more growth more acquisitions on top of what you see organically. So the true growth rate for the next few years should be closer to 13-15%.

I don’t see Roper stock today as a particularly cheap price for the company, but it’s totally fine for long-term investors.

The below is from a former Roper sales manager who was with the company until not long ago when Roper divested that line of business. Here’s the expert’s take on Roper’s culture:

You could never excite [Roper’s management] with a piece of technology unless there was a number associated with that. If you turned around and said, “Oh, we’ve just come up with this thing. We think it’s going to be great,” the answer was always, “Well, okay. How does that affect your investment versus your EBIT ratio?” How does this help cash flow? ” They weren’t ungrateful around it. They were just less interested in it. They were highly financially savvy over what made them tick, which was basically high cash efficiency, low asset [intensity]and driving strong margins.

The former sales manager went on to explain that Roper’s baseline for a unit was at least double of GDP growth in terms of organic expansion. And that all its units were expected to produce a 20% operating profit as a minimum. Units that could not meet these standards would see management shake-ups or be sold off entirely.

An important note is that Roper would prefer to own a niche player that dominates its small category than a bigger firm that has a more mediocre position. It’s better to be # 1 in one small industrial application and have a laser-focus on it than be # 3 or # 4 in many things.

Interestingly, Roper also uses this rigorous methodology when evaluating new potential acquisitions. If a company isn’t matching these desired metrics, Roper won’t even consider buying it. There’s no buy and fix thinking at Roper; If you aren’t capable of hitting the necessary margins and growth profile from day one, Roper isn’t interesting in purchasing you.

Potential acquisitions also know, upfront, that Roper will keep their management teams strictly accountable to hitting the necessary metrics. Potential merger partners know ahead of time not to accept Roper’s offer if that’s going to be a problem.

Additionally, Roper cares about cash flow generation above all else. Its key metric is cash return on invested capital “CROIC”. The expert explains:

They’d go, “No. Your inventory’s too high. You’re not turning stuff. You’re not getting stuff through your factory. Your factory’s not operating correctly. You guys are awful.” You’d sit there and go, “Well, hang on a minute. Another company thinks I’m king. Making 22% operating profit or just growing my business, I’ve done all this stuff,” but that was their way of doing stuff.

Now what do I think about this sort of mechanical and almost automated way of running businesses?

If the whole economy ran this way, it’d probably not work. There’s a certain lack of human compassion to an approach that prioritizes a couple of hard financial metrics above everything else. The idea of ​​jettisoning every division that can’t always grow at X rate or generate Y margin year in and year out probably wouldn’t work in many cases.

There’s also a risk in that Roper is not an operating company. The head management team has a Warren Buffett / Berkshire type approach. The Roper head office almost never makes calls about how an individual operating unit should handle its affairs, just as Buffett isn’t usually calling shots at See’s Candy or the BNSF railroad. If there were a major prolonged economic downturn and several of Roper’s businesses ran into issues at once, Roper’s management team might struggle to adapt if the underlying operators at its subsidiaries didn’t have a handle on the situation.

Roper’s core strategic asset, at a headquarters level, is its ability to buy, integrate, and then, if necessary, divest dozens of units across all manners of industrial and software businesses. Management is only rivaled by Constellation Software (OTCPK: CNSWF) in running a specific playbook as it pertains to buying cash flow-rich assets and running them with unflinching efficiency.

I’d argue that for Roper, this is a fine approach. Historically, it has not had issues selling off units it no longer wanted; buyers are generally available at decent prices. A recent big sale, Transcorein fact went off at a huge multiple despite being well-below-average quality as far as Roper’s portfolio goes.

I will say the focus on cash generation, above all, should protect the stock from significant downside volatility. It’s unlikely that Roper will get into liquidity trouble, despite using significant debt leverage, because it prioritizes cash, not accounting earnings.

Over time, if your cash flow generation keeps going up, the earnings will take care of themselves. The reverse is not necessarily true, as former shareholders of Tyco, GE (GE), or Valeant could tell you.

Or, as the old adage goes, earnings are an accountant’s opinion, cash is a fact.

Roper is a cash flow machine, and it is constantly bolting on new engines to produce more of it while quickly ridding itself of any units that can’t keep up. As the cash is quickly used for either more acquisitions or to increase the dividend, so shareholders quickly enjoy the benefits of this laser-focus on cash generation.

A quick aside on the dividend. It’s easy to look at Roper’s starting 0.6% yield and say this isn’t a dividend stock, who cares. However, the company has put up a mid-teens compound growth rate on the dividend for decades, and so it actually piles up quickly:

As recently as 2006, the quarterly dividend was 6 cents per share. Now it is 62 cents per quarter, or a tenfold increase in fifteen years.

I’m not arguing that the reason to buy Roper is primarily the dividend. Clearly, the objective here is a large capital gain if you hold for a reasonable period. However, do note that Roper will throw off a surprisingly robust income stream to its long-term investors as well.

The Biggest Risk to Roper

The biggest risk to Roper, in the long-term, is a lack of suitable acquisition targets. Multiples have gone up for most software businesses on the market. Additionally, new competition has entered the market. The king of software roll-ups, Constellation, has recently decided to start buying mid-sized companies, which nudges into Roper’s turf. Also, industrial firms such as Emerson (EMR) are acquiring heavily in certain software applications such as factory automation. Some smaller companies are copying the Roper playbook outright as well.

Roper’s market cap is now up to $ 50 billion. Realistically it can double once more without too much trouble. At that size, it will be a $ 100 billion market cap business doing $ 12 billion in annual revenues and $ 2.5 billion in profits. At that point, it starts getting hard to move the needle.

Historically, Roper has shied away from acquisitions of greater than a few billion dollars.

A $ 5 billion market cap software company acquisition producing $ 1 billion in annual revenues still adds substantial earnings at today’s Roper. Once the company has doubled again, though, $ 1 billion of new revenue would be less than a 10% addition to the baseline. And once you get past $ 1 billion in annual sales, the potential acquisition pool gets awfully small. With any luck, the current downturn growth will turn into a prolonged bear market and Roper can buy a lot of SaaS businesses on the cheap. After that though, we’ll see.

What does Roper do in 5-10 years once it gets harder to find things to buy? They could buy back their own stock aggressively for one. For another, special dividends become compelling as a way to reduce the equity base and thus give more torque to new acquisitions. Finally, like its peer Constellation with the Topicus (OTCPK: TOITF) spin, Roper may start spinning off business units as separate companies to shrink its overall size and reinvigorate its growth prospects.

At some point, Roper will have to cross the “too-big-to-succeed” bridge but I think it has quite a few good years left before then. And there are a few levers that a company in that position can pull to keep producing double-digit returns even once it reaches a very large size. Long story short, Roper remains one of my favorite ways to own software in a highly-profitable dividend growth package.