Diving into the recent “2022 Report on the State of the Legal Market”, we see a legal industry that is demonstrating resilience, but could that be derailed by rising compensation costs?

The Thomson Reuters’ 2022 Report on the State of the Legal Market depicted a legal industry immersed in an escalating war for talent. Ever since major law firms like Milbank began raising their associate salaries in early 2021, the market has one-upped itself in each ensuing month by raising the average pay of associates.

By the end of the second quarter of 2021, associate compensation growth per associate full-time equivalent (FTE) had reached 5.9% on a rolling 12-month average. By November, that growth had skyrocketed to 11.3%, with no end in sight.

Law firms are slow to change, and even when faced with a crisis, they implement their traditional strategy. To that end, firms began regularly increasing compensation, relying on higher pay to maintain retention. According to the underlying economics, however, this is not merely a poor strategy, it is one destined to lose.

In economics, the labor-leisure model is a way of conceptualizing how people make decisions about their jobs and wages. Fundamentally, it’s an acknowledgment that all workers make a tradeoff: Do they want to earn more money but enjoy fewer hours of personal time? Or do they want more leisure at the cost of lower income? This we can show as a chart, with hours of leisure on the X axis and income on the Y axis. Under this system, a wage takes the form of a line, drawn from the far end of the X axis to the top point of the Y axis. This top point symbolizes the theoretical maximum an employee could earn if they were to devote all of their available time to working, while the opposite point of the line symbolizes the minimum income they would accrue if they were to enjoy nothing but leisure.

To complete the model, we need to add the worker or in this case, the associate. This is done by including a utility curve (also known as an indifference curve) which signifies an exchange of income and leisure in which the young associate gains the same satisfaction. As long as the associate is somewhere on this line, he or she is indifferent to the exact mix of labor-leisure. However, if another law firm were to offer the associate a superior bid (i.emore money for the same effort) the associate would move to a new utility curve which we’ve drawn above.

With all of this set up, we can determine how many hours people will work and for what wage, and they will select the point at which the wage line contacts the highest utility curve. 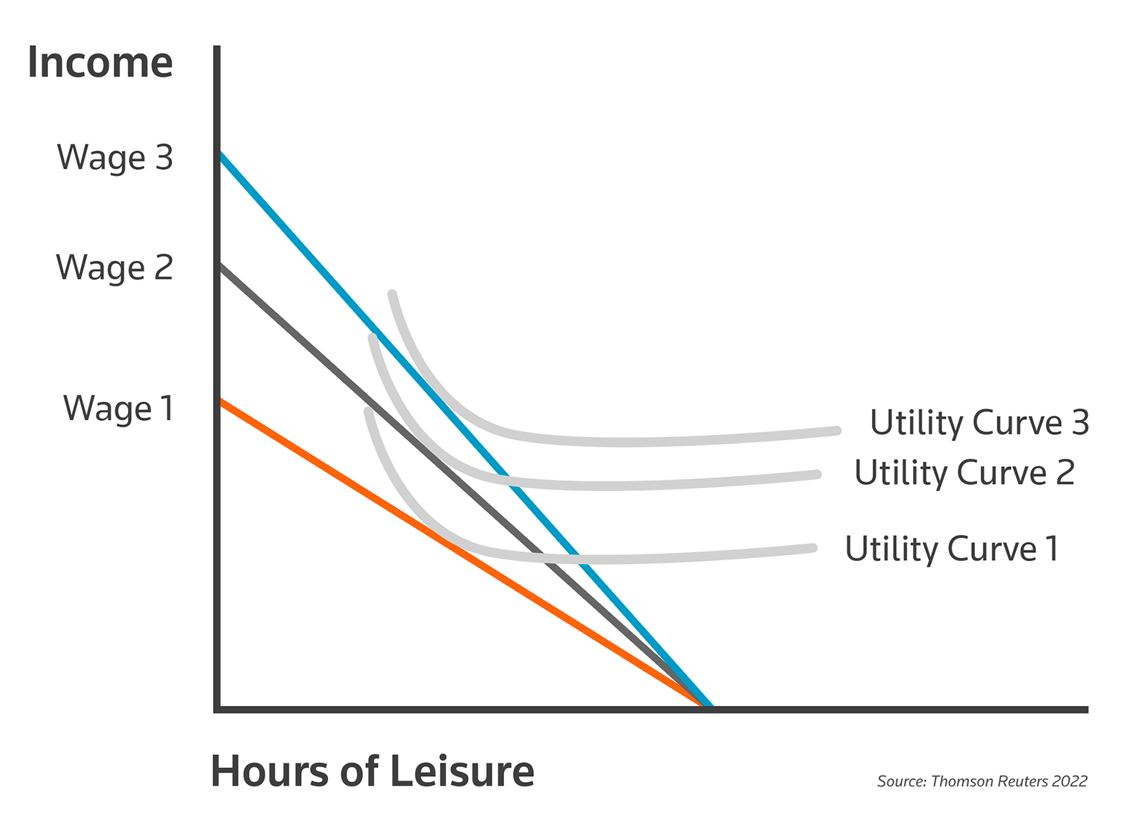 Associates perennially reside on the left side of this graph, working absurdly long hours for very high pay. This is where the first problem arises for law firms: How to slow increasing marginal costs. The utility curve is a curve for a reason. As the hours of leisure decrease, associates place increasing value on those remaining hours. As such, the pay that law firms must offer their associates for these few remaining hours rises quickly. The utility curve eventually goes infinite as associates refuse to give up any more vital leisure time. This is why law firms cannot simply pay associates to work indefinitely, the cost per hour eventually becomes too much for even a law firm to bear.

This, of course, is nothing new. Firms have recognized a limit to this arrangement and have historically found a comfortable area of ​​stability. The expectation was set for a certain pay for a certain number of hours from their associates.

And then the COVID-19 pandemic happened, and millions of people in all industries reevaluated their careers and lifestyles. En masse, utility curves shifted, breaking the equilibria that law firms had managed to reach with their associates. The same combination of wages and leisure dropped down multiple utility curves as, rather than the job changing, associates themselves changed. Simultaneously, firms began a bidding war for talent as the value of associates skyrocketed while simultaneously the discontent of said associates climbed.

The solution seemed obvious to many law firms. If the talent war is a bidding war, the way to win is to keep pace. As we’ve said, however, those firms that engage with this strategy are not only destined to see declining returns, they’re destined to lose.

For example, let’s say that a law firm is looking to retain talent and they will do so by continuously increasing salaries. As stated previously, because lawyers are already on the far-left side of the labor-leisure graph and because of the near-verticality of the utility curve at that point, paying associates more will not make them more productive. Worse, the retaining firm isn’t really making their associates happier. A little bit of calculus shows that the increases in utility from wage increases in the upper right-hand territory are just as marginal as the productivity increases, which is to say, very little. The retaining law firm has significantly increased its costs, achieved no productivity gains, and their associate is only slightly happier.

Now let’s say there is a second firm, one looking to recruit in the current market. Their strategy is a simple one: match the pay and require fewer billable hours from their new hires. If the only thing keeping associates at a firm is money, then by giving them the same pay for less work another firm may lure them away. This is not a terrible solution to gaining talent. While the profit generated by this new lawyer will be lower, given the increased direct costs and fewer hours billed, this will still be positive profit generation for the firm.

What is the retaining firms’ response in the face of this strategy? If firms follow the traditional strategy, they increase salaries further. In response, the recruiting firm matches that salary and maintains the lower hours. The process repeats endlessly until the economic profit of this layer reaches zero.

Who wins and who loses? Well, obviously associates win as they’re reaping all the rewards of their labor, while working the same hours or less. Firms that engage in a strategy of pure compensation, however, lose. By engaging in a never-ending series of one-upmanship firms are falling prey to the viciousness of a commodities market where the highest bidder takes all. The only equilibrium firms find and the only endpoint to this strategy, is one where all of the potential economic profit of an associate has been squeezed out in the salary negotiations. If firms treat the talent market as a commodity market, then the economics of a commodity market will take hold and drive the profit to zero.

So, what are firms to do? This is not a new problem, other industries have faced it and found solutions. By emphasizing a more tribal sense of belonging, firms can build glue with their associates that goes beyond a transactional nature. Further, these binding strategies don’t fall prey to this ever-escalating spiral of increasing costs because associates may reject offers that may be better financially because they’ve been imbued with a sense that they gain happiness through their employment at their current firm.

If law firms can enable their associates to find purpose and happiness through a way other than monetary compensation, perhaps those firms can escape the harsh economic demands of an open market.