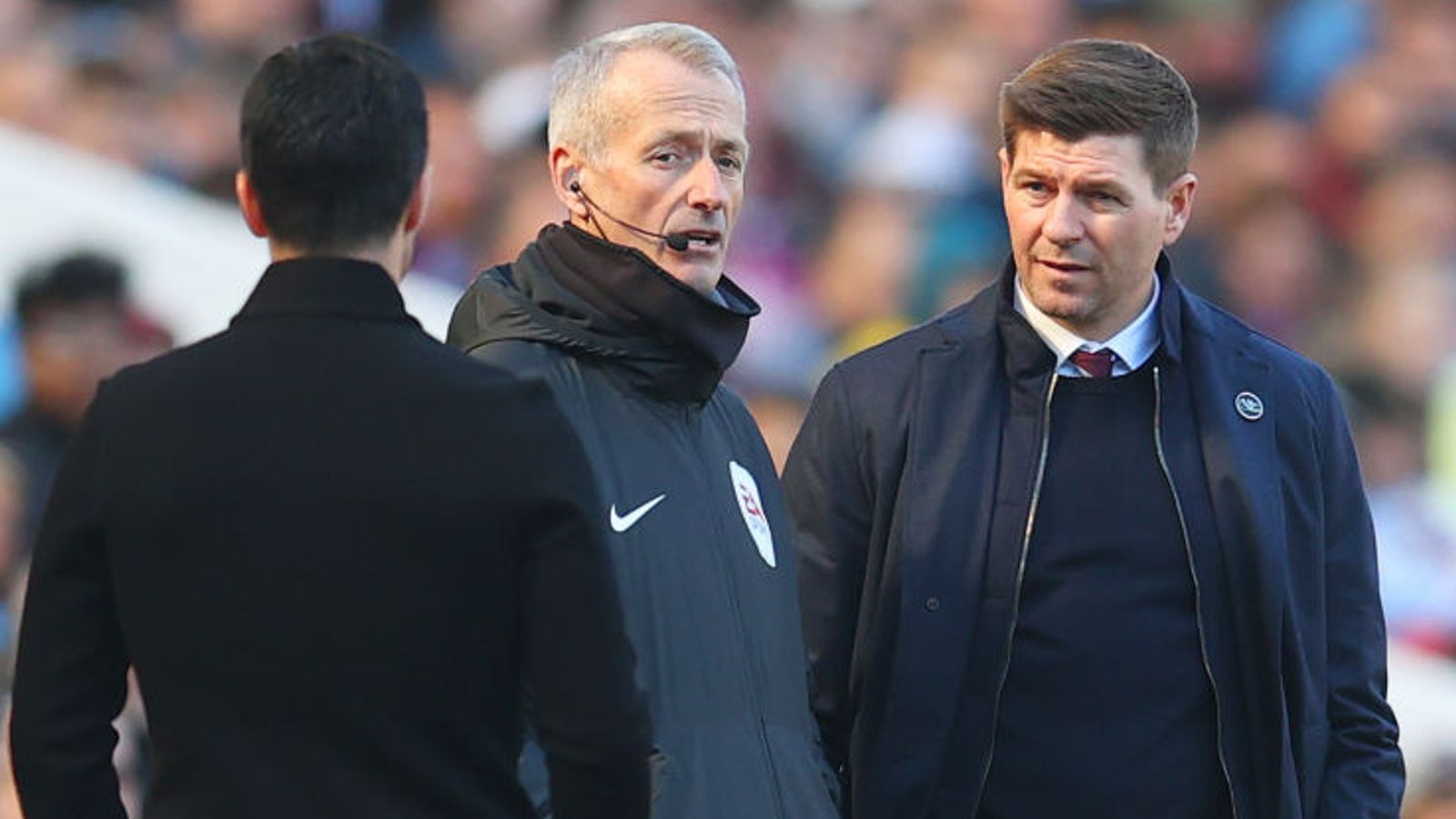 An ’emotional’ Steven Gerrard was involved in an exchange with BT Sport reporter Des Kelly after Arsenal returned to winning ways with a 1-0 victory over Aston Villa to move four points clear of Manchester United in the race for Champions League qualification.

Bukayo Saka scored the only goal of the game in the 30th minute with a shot from the edge of the area.

The Gunners, who also have a game in hand on United, saw a five-match winning run ended by Liverpool in midweek but they completely dominated the first half at Villa Park.

Villa improved in the second half and hit a post through Ollie Watkins but they were unable to prevent a second straight defeat. Their final chance came in the last minute of injury time when Pepe fouled Douglas Luiz, and Philippe Coutinho at last forced Bernd Leno into a save with a free-kick from the corner of the area.

FREE TO WATCH: Highlights from Arsenal’s win at Aston Villa

It was Villa’s first shot on target – coming in the 96th minute – and BT Sport reporter Des Kelly put the unwanted statistic to Gerrard shortly after the final whistle. Here’s the interview in full …

Des Kelly: Can you pick through the pieces of that? It has been a tough afternoon for Villa today…

Steven Gerrard: I thought it was a tough first half because we allowed it to be tough. I thought we were indecisive in a lot of the things we tried to do, I thought our performance lacked belief and it wasn’t really until half-time that we showed that we could improve and be much better in the game.

But at that point you are obviously 1-0 down, you’re chasing it, you’ve obviously got to take a few gambles and a few risks that normally you didn’t want to do in the original game plan. But we were much better second half, first half we deserved to be behind. I thought we were second best.

Des Kelly: They pinned you back for long periods. Were you giving them too much respect, perhaps?

Steven Gerrard: Yes, I think individually and collectively we maybe done that. We wanted to be organized, we wanted them to have the ball in certain areas – ie with the center-backs and going outside of our shape – but we set up today to be aggressive and in that shape I thought we didn’t.

I thought we lacked a little belief in what we were doing and I thought certain individuals lacked a bit of belief. It’s difficult to execute a game plan, what you want and how you want it to look, if not everyone believes in it. Second half I thought we believed in it a lot more, OK we went back to front a little bit quicker, we wanted to test the center-backs and make it a little bit more about their second half defense.

But I think across the board we had more belief, we were less indecisive and off the back of that we created three or four interesting moments in the game. But overall, we certainly have no complaints in terms of the scoreline.

Des Kelly: I don’t think you got a shot on target until right at the death, there.

Steven Gerrard: Yeah, that is exactly how I described the game to you, though, is it not? Not good enough first half and then improved second half. We pushed at the end, got some good crosses in, created some more interesting moments, and I thought the performance was a lot more positive second half.

But well done for spotting that.

Des Kelly: [Laughs] Since April you’ve made a lot of progress, but you’ve lost to Manchester City, Liverpool, Chelsea, and Arsenal – so there’s still that gap that you have to close…

Steven Gerrard: Well done, Des, for recognizing that. If you asked me that question, I would say the league does not lie and I’d say that Manchester City, Liverpool, Chelsea, Arsenal, Man Utd, West Ham, Wolves, at the moment, are ahead of us for a reason and there’s a gap and that’s what we are striving to do. But if we want to take one of them places, we’ve got to be positive, got to believe in it, can’t be indecisive, and we’ve got to go and grab it off them, we’ve got to believe what we’re doing, to keep learning and get support from up above and grab it.

I do like the way you work those things out pretty quick.

Des Kelly: I think you’re aggressive in the interview, and you should tell your players to do the same thing (laughs).

Steven Gerrard: I’ll tell you what I am in the interview, I am emotional, I care, I don’t like getting beat and I actually thought your questions would be a little bit more better, in all honesty. No disrespect, Des, I am not making it personal. But you’ve just said to me there’s a gap to Manchester United and City, blah blah blah and we know that. And you also said we had one shot on target towards the end of the game, that’s how I described the game as well.

Des Kelly: Well, we both agree.

The result saw the Gunners bounce back from defeat by Liverpool in midweek and move four points clear of Manchester United with a game in hand in the race to qualify for the Champions League.

Mikel Arteta had complained about the scheduling, with Arsenal having to play at lunchtime having hosted Liverpool on Wednesday evening, and he said: “It was a big win.

“After the defeat against Liverpool we wanted to come here and play well first, which we did, and get the three points because we want to keep the momentum going. I think the team showed today a lot of personality to come and play the way we played. We dominated the game. “

Bukayo Saka scored the only goal in the 30th minute and shone during the first half before being substituted with 20 minutes left.

“He was really fatigued and after Liverpool he had an issue with his hip,” Arteta said. “He’s played a lot of minutes and you could tell. We don’t want to risk (anything). He needs to go with England now and we decided the best thing to do was to take him off.”

Analysis: Big step along the road for Arteta 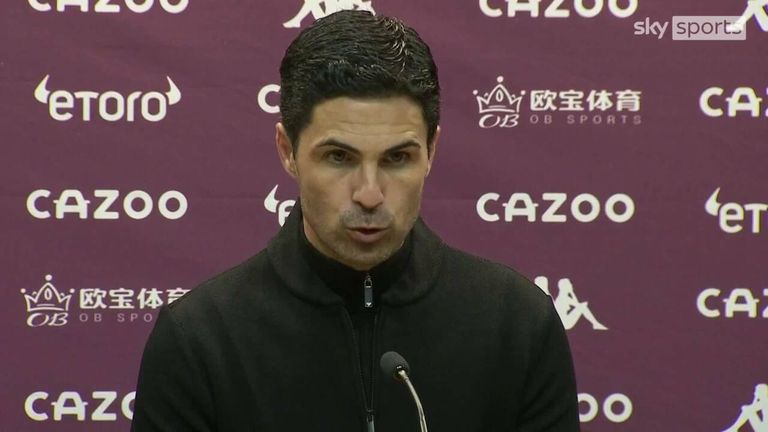 Mikel Arteta says his side showed ‘a lot of personality’ to bounce back from their defeat against Liverpool with victory over Aston Villa.

It was a sign of where the game was that Rob Holding replaced Martin Odegaard with five minutes to play. It is all about results for Arsenal at this stage of the campaign and there is no need to entertain. The prize is huge if they can finish in the top four after five years away from the Champions League and they strengthened that position at Villa.

Mikel Arteta needed holding back by fourth official Martin Atkinson as he continued to point at his players to track back during an attritional second half. After Leno clawed away one last fizzing free-kick from Coutinho, the final whistle was greeted elastically by Arteta as he embraced his assistant Steve Round on the touchline.

The Spaniard is striving to take Arsenal back to where they feel they belong – and here you could sense the importance of this victory in one of the more awkward hurdles that remained this term.

This was an off-day for Villa, as Gerrard slumped back into his seat during the closing stages. Arteta never stopped gesticulating. He has got his players set up in his image now – “he knows exactly what we need” goes the song from the jubilee Arsenal fans – and while trips to Tottenham and Chelsea still lie ahead, there is nothing flaky about Arsenal anymore.

Only Arsenal have regularly fielded a starting XI whose average age is under 25 – but they are growing in experience with each passing week. This was another big step for Arteta and his side.

Arteta has revealed Aaron Ramsdale will not be fit enough to play for England in the upcoming internationals against Switzerland and Ivory Coast due to a hip injury.

The 23-year-old was absent from Arsenal’s squad to face Aston Villa on Saturday and faces a spell on the sidelines.

Before the game, Arsenal boss Mikel Arteta told BT Sport: “He’s got an injury, he had an injury in his oblique muscle and he’ll be out for a few weeks.”

Ramsdale has been an ever-present for the Gunners in the Premier League since his arrival from Sheffield United in August. His injury will be another disappointment for Gareth Southgate after Liverpool full-back Trent Alexander-Arnold also withdrew from his squad due to a hamstring issue.

Arteta later confirmed in his post-match press conference Ramsdale would be unable to feature in the Three Lions’ two friendly fixtures.

“Aaron won’t be able to play for England,” the Arsenal boss said after the 1-0 win at Villa Park.