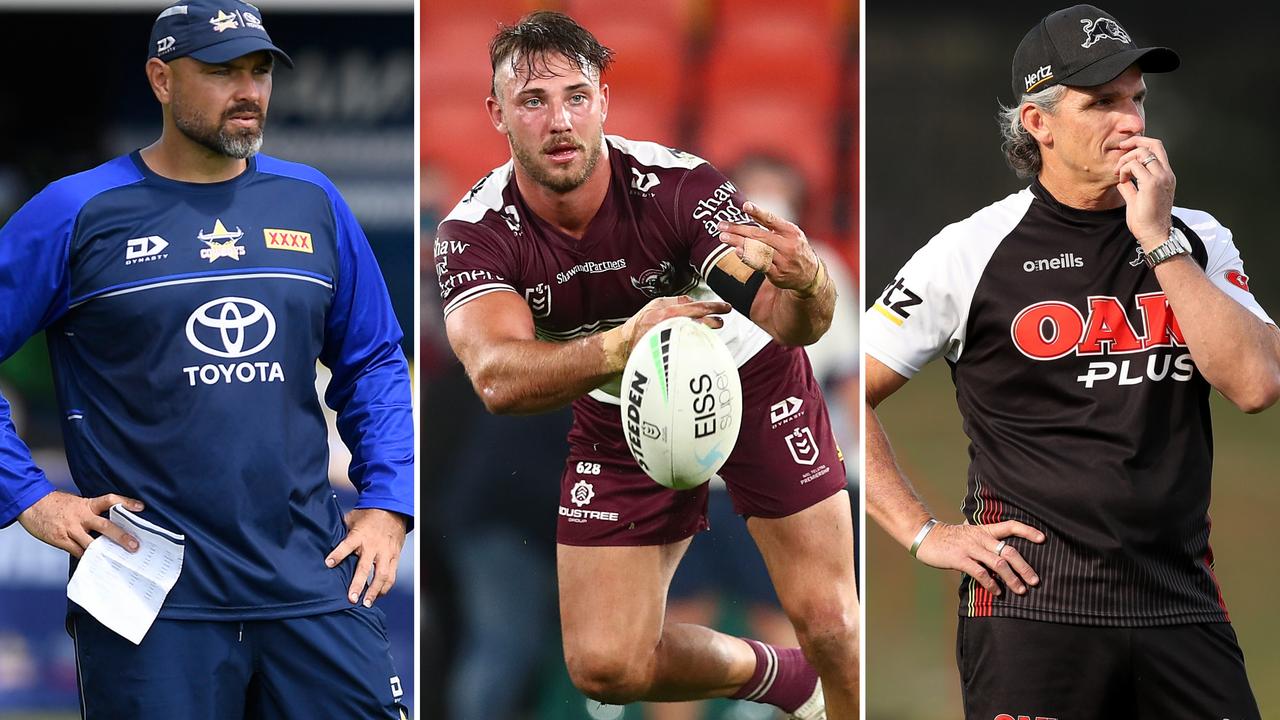 The Cowboys and Panthers will be forced into big reshuffles with several star players unavailable due to State of Origin duties.

Panthers coach Ivan Cleary, however, has prepared and rested a number of his New South Wales Cup players last week.

The Warriors and Sea Eagles will get a timely boost with key players returning from injury and suspension.

Given this is a split round, eight teams will get the chance to put rest and recharge with the bye.

Read below for Round 13 Team Tips!

Team Tips: David Fifita’s injury is the big news for the Titans. The star second rower aggravated his MCL injury that sidelined him for Rounds 9-11 and now faces another two-to-three weeks on the sideline. Moeaki Fotuaika is a chance of returning from an ankle injury and would slot back into the starting pack, allowing Isaac Liu to shift to an edge and Sam McIntrye drop back to the bench.

Team Tips: Coach Todd Payten will be forced into reshuffling his team after six players were selected in the Maroons’ extended squad. Hamiso Tabuai-Fidow, Valentine Holmes, Murray Taulagi, Tom Dearden, Reuben Cotter and Jeremiah Nanai have joined the Queensland squad in camp. Jason Taumalolo is expected to make a timely return so will slot in at lock with Coen Hess likely to shift to prop, but Payten will need to dip into his reserve grade teams to fill the rest of the holes. Holy Luke will replace Nanai in the starting second row with I’m Condon or new recruit Brendan Frei joining the bench. Brendan Elliot, Connelly Lemuel and Laitia Moceidreke are the likely men to fill the backline, while I’m Hampton is the option at five-eighth – unless Scott Drinkwater is moved from fullback. There is a chance though that Queensland coach Billy Slater allows Tabuai-Fidow and Taulagi to leave camp to play, which would be a huge help for the Cowboys, but Dearden may not be able to given he’s been named 18th man.

Team Tips: Penrith will be without Stephen Crichton, Brian To’o, Jarome Luai, Nathan Cleary, Apisai Koroisau, Liam Martin and Isaah Yeo after they were selected in the NSW Origin side. But Panthers coach Ivan Cleary prepared for this and rested a stack of his reserve grade players last week. Expect Charlie Staines and Robert Jennings to replace To’o and Crichton. Sean O’Sullivan will fill in for Cleary as he did earlier this season and expect Kurt Falls to make his NRL debut in the halves. Mitch Kenny will be promoted to No.9 with Soni Luke joining the bench. Scott Sorensen will move into the starting side with Chris Smith joining the bench and J’maine Hopgood or Matt Eisenhuth will replace Yeo at lock. Jaeman Salmon can fill in for Martin in the second row, however Izack Tago is also an option and could shift there with Salmon playing in the centers. Like the Cowboys, Penrith will be hopeful Koroisau is allowed back into club land given he’s not in Brad Fittkler’s 17.

Team Tips: Tevita Pangai Junior is hoping to return after being a late scratching last week due to back spasms. That will see Joe Stimson drop out of the side. Josh Addo-Carr’s shock Origin snubbing means the star winger will be free to play the Panthers.

Team Tips: With Daly Cherry-Evans unavailable due to State of Origin duties, Keiran Foran will likely shift to No.7 with Josh Schuster to play five-eighth. Dylan Walker won’t play after suffering a knee injury last week. “Dylan’s in a bit of trouble,” coach Des Hasler said after the game. Karl Lawton returns from his suspension and will fill Walker’s role of bench utility, while Ethan Bullemor will come onto the bench for Schuster. Veteran prop Martin Taupau is due back from a quad injury and will push Kurt De Luis back to the reserves. Hasler also said Taniela Paseka will “probably” be back. Speedy winger Jason Saab is a chance to return from a toe injury, which will see Jorge Taufua miss out on the 17.

Team Tips: The Warriors are set to be boosted by the return of Wayde Egan and Bayley Sironen. Egan will start at hooker with Freddy Lussick moving back to the bench and Taniela Otukolo dropping back to the reserves. Bayley Sironen is due back from a groin injury but may not force his way into the 17. Star forward Josh Curran is eyeing a Round 14 return from a knee injury but could be included in the extended squad this week.

Team Tips: Josh Papalii and Jack Wighton are out due to Origin. Corey Horsburgh will likely start at prop, while Peter Hola’s impressive performances in NSW Cup might earn him a spot on the bench. Matt Frawley or Brad Schneider will come in for Wighton. Expect Sebastian Chris to be named in the No.3 jersey after he was a late shift to the centers last week following Jarrod Croker’s shoulder injury. Xavier Savage went off late in last week’s game for a HIA but there’s been no word on whether he ended up passing or failing it.

Team Tips: Coach Trent Robinson will be forced into naming a new-look backline with James Tedesco, Daniel Tupou and Joseph Suaalii in camp with the Blues. Lindsay Collins is also unavailable after being selected in the Maroons side. Joey Manu will shift to fullback and Billy Smith will slot in at center. Kevin Naiqama will take one wing, while Adam Keighran could take the other after being tried there in the NSW Cup last weekend, although Suaalii may return from camp to play. Fletcher Baker is the likely man to move to prop with Daniel Suluka-Fifita joining the bench.