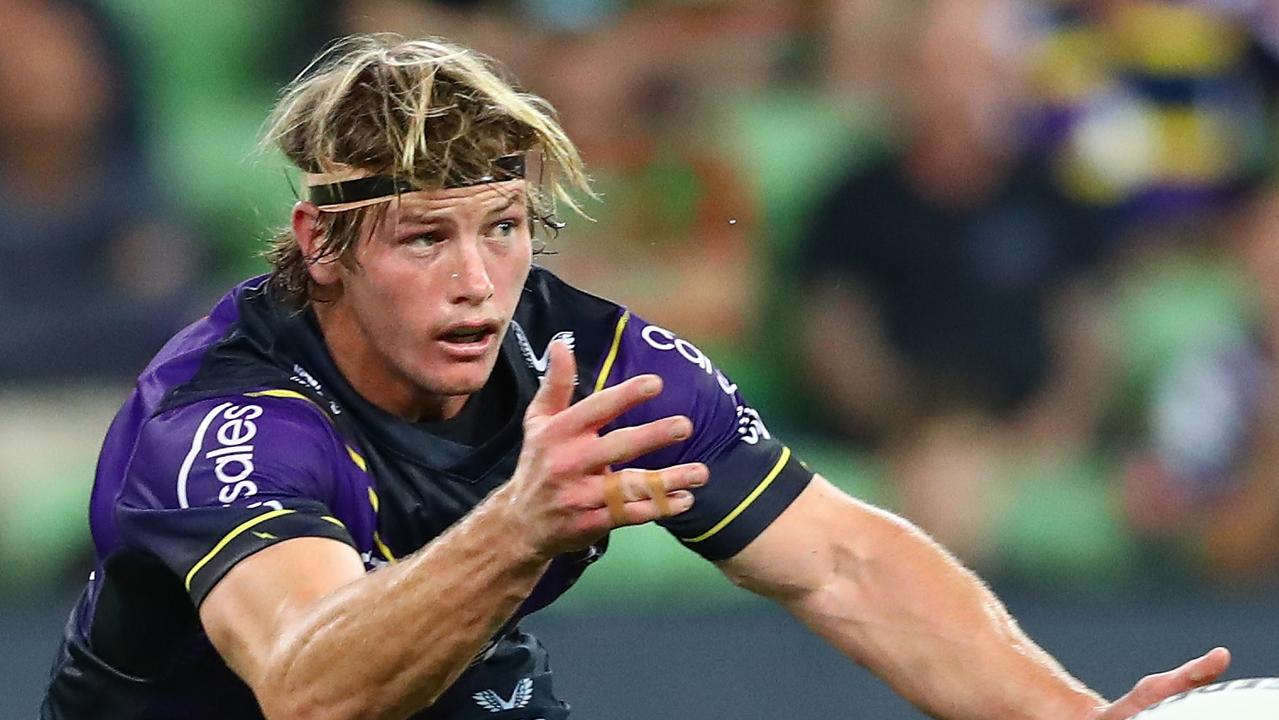 Harry Grant has been named in the Storm’s 17 however the star hooker won’t play due to testing positive to Covid-19 after the team list was submitted.

Meanwhile, cavalry returns for the Knights with two key ins and the Tigers are hoping their five-eighth Jackson Hastings has a successful night at the judiciary.

Read on for the Round 3 NRL Teams Analysis.

KFC SuperCoach is back! You could win the Holy Grail of Fantasy Footy plus $50k cash. Play now

Team Analysis: George Burgess has been named in the extended squad despite facing a ‘sexual touching’ charge. The club confirmed in a statement on Tuesday that they are awaiting the “necessary and required” information and cannot make a call on his availability. Andrew McCullough is out with an elbow injury while utility Moses Mbye moves into the No.9 jersey and will be required to play 80 minutes with Anthony Griffin naming a four-forward bench.

Team Analysis: Ronaldo Mulitalo is out after suffering a concussion last week. New recruit Matt Ikuvalu comes in to replace him on the wing. Teig Wilton is also out after copping a ban for his dangerous contact on Eels halfback Mitch Moses. Siosifa Talakai replaces him in the second row. Utility Braydon Trindall is back from a suspension to play his first game of the season and has landed a spot on the bench.

Team Analysis: The Tigers have named Jackson Hastings but he will need to be successful at the NRL judiciary on Tuesday in order to be free to play. The star five-eighth is fighting to downgrade a grade two dangerous throw charge. Jock Madden has been named in the reserves should Hastings be ruled out. Jacob Liddle returns from a knee injury and pushes Jake Simpkin back to bench, while James Tamou also returns after being a late scratching last week.

Team Analysis: An injury to Ash Taylor has forced Warriors coach Nathan Brown to recall Kodi Nokirma in what will be the team’s third halves pairing in as many games. Other than that, the team is the same as last week. Matt Lodge only played 20 minutes in Round 2 due to illness but he is expected to return to bigger minutes this week.

Team Analysis: Liam Knight made his return from three off-season surgeries last week via New South Wales Cup and has been named to come off the bench, pushing Davvy Moale back to the reserves. Cameron Murray started off the bench last week but it’s likely that he’ll return to his usual starting role. Meanwhile, Josh Mansour has been included in the extended squad after impressing in NSW Cup last week and could be a late addition to the backline.

Team Analysis: Connor Watson has been named at starting hooker however coach Trent Robinson may make a late switch with Drew Hutchison like he did last week. Angus Crichton has been moved back to the bench with Nat Butcher taking his spot in the run-on side. Jared Waerea-Hargreaves has been named on the bench after being named in the starting pack last week but moved to the bench before kick-off. Paul Momirovski and Billy Smith have switch places at centre and wing.

Team Analysis: The big news is Nathan Cleary has been named in the extended squad and could be a late addition to the 17 to play his first game of the season after shoulder surgery over the summer. Taylan May comes onto the win to replace the injured Brian To’o and in a big boost for the Panthers, James Fisher-Harris has been named despite suffering an injury scare last week. J’maine Hopgood and Lindsay Smith are on standby in the reserves though.

Team Analysis: Co-captain Kalyn Ponga returns to the line-up after missing last week due to a knee injury, while Daniel Saifiti also makes his return to the 17 to play his first game of the season. David Klemmer will not play with the club confirming he will undergo surgery on his knee, while Lachlan Fizgibbon is also absent after suffering a knee injury last week. Brodie Jones is out after testing positive to Covid-19.

Team Analysis: Harry Grant has been named however he will not play with the Storm revealing he has contracted Covid-19. Tyran Wishart will likely replace him at hooker, with Jayden Nikorima potentially coming onto the bench to provide cover. However, Brandon Smith could be a chance to return early from a fractured hand after being named in the reserves. Other than that, the Storm are 1-17 on the side that delivered a win for Craig Bellamy in his 500th game as coach.

Team Analysis: Coach Brad Arthur has dropped his son Jake from the top 17 as Wiremu Greig comes onto the interchange in his place. Parramatta were upset by the Sharks in Round 2 and Jake Arthur spent the entire game on the bench. Nathan Brown starts at lock with Oregon Kaufusi going back to the bench.

Team Analysis: Ricky Stuart finally has some good news with Nick Cotric (quad) and Jordan Rapana (suspension) returning on the wings as James Schiller and Seb Kris drop out. Rookie halfback Brad Schneider (Covid) is back in the starting side which pushes Matt Frawley to the bench and Adrian Trevilyan to the reserves.

Team Analysis: Justin Holbrook has gone with the same 17 which impressed against the Warriors last week. He’s also decided to slot new signing Jamayne Isaako straight into the extended squad after he joined the club from the Broncos this week

Get all the latest NRL news, highlights and analysis delivered straight to your inbox with Fox Sports Sportmail. Sign up now!!

Team Analysis: Reuben Cotter replaces Mitchell Dunn on the bench after the latter suffered a season-ending knee injury against the Raiders. There are no other changes to Todd Payten’s top 17. Jamayne Taunoa-Brown suffered a knee injury in Round 1 and has been named in the reserves.

Team Analysis: The Sea Eagles are staring down the barrel of three straight losses for the first time in almost a year but coach Des Hasler has stuck with the same 17 that lost to the Roosters last week. Dylan Walker (head knock) will be monitored, while Josh Aloiai has one more week to serve on a suspension.

Team Analysis: Trent Barrett has named the same list as last Tuesday. English star Luke Thompson is starting, with Corey Waddell on the bench and Tevita Pangai Junior on an edge — but in Round 2 that combination was mixed up with Pangai Junior moving to prop, Waddell to an edge and Thompson to the bench.