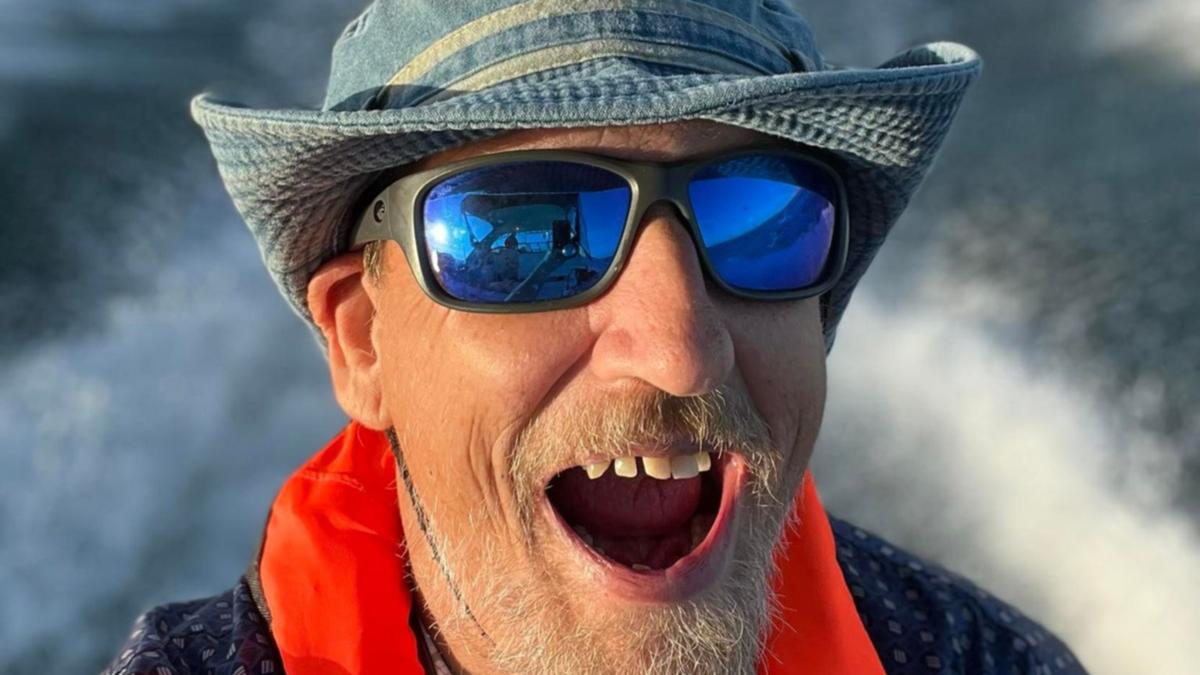 For the past two years Malcolm Goldsmith, 50, has been fighting to stay alive.

Cancer has slowly taken hold of his body – and chemotherapy sessions aimed at helping him, instead have left him exhausted.

For more Lifestyle related news and videos check out Lifestyle >>

Malcolm, who was diagnosed with Hodgkin’s lymphoma in 2020, was told he had two years left to live at best.

WATCH IN THE VIDEO ABOVE: Malcolm embarks on his long-forgotten dream

He didn’t want to live out the remainder of his bed-bound life and hooked up to cocktails of drugs.

Instead, Malcolm – from Howlong on the NSW / Victoria border – cashed in his life insurance, bought a yacht, grabbed his cat Ruby and headed north.

He was ready to experience the best that life has to offer.

“I’m at peace with my cancer,” Malcolm says 7Life.

The 50-year-old has never owned a boat, never captained a ship and has been a mere passenger of a vessel a handful of times.

But even though he knew he was dying, he was ready to tackle one last challenge.

Malcolm has spent the last six months snorkeling with giant sea turtles, swimming with pods of wild dolphins and experiencing what life truly has to offer.

Humbly, Malcolm confesses he has been blessed with a “good brain” allowing him to make quick decisions, think on the spot and pick up new skills quickly.

“My whole life has been based around my brain,” the retired air-force man said.

“I’ve always been a fast learner.”

But two years of harsh chemotherapy stripped his ability to think as clearly as he liked.

“The worst part of chemotherapy is the brain fog,” he admits.

So when he was told his cancer was terminal and he was just two years left, Malcolm felt defeated.

“I was told that’s it and I had resigned myself to the fact that I was going to die in the next two years … max.”

Weakened from years of seemingly “wasted” treatment, Malcolm made the decision to withdraw his life insurance policy.

With two grown children, the father had decided to build a house and live the rest of his life in comfort.

But then something changed.

“I realized the house could take six months or 12 months,” he says.

“To be honest, I could be dead before the house was even finished.

“Would I just sit there and think ‘is this what the rest of my life would be like?’

“I knew I was a goner so I just thought this bugger.”

That’s when Malcolm remembered a long-lost dream of his – to sail around the world on a boat of his own.

So just like that, the 50-year-old bought his first boat.

He began researching how to sail his brand new 46-foot luxury yacht and began planning a route up north.

He had planned to stop at places he had never heard of and see wildlife in its natural habitat.

“I planned to travel until my cancer came back,” Malcolm says.

“Then I would come back and die at home.

“The treatment was so bad … it just wasn’t an option.”

Packing a bag with just the essentials, Malcolm grabbed Ruby and headed for the ocean.

Malcolm candidly admits that he was nervous jumping onboard. He was concerned his brain wouldn’t be up for the challenge.

“If you go out into the ocean and don’t know what you’re doing, well, you could die,” he says.

But the self-described “old man” proved himself wrong.

The moment he stepped foot on the yacht his brain retained all the information he had learned.

“After two years of fog it was incredible, I showed myself that I still had it,” Malcolm beams.

Ruby quickly gained her sea legs and the pair spent many weeks on the open ocean without land in sight.

At dawn, Malcolm would rise and be greeted with a pod of dolphins more than 50-strong.

On his daily snorkel dives he would meet turtles over 100 years old and decorated in barnacles.

He would see jellyfish floating by and visit unique islands off the coast of NSW.

Docking off the coast he spoke with deck hands from Port Stephens and Coffs Harbor.

“It’s been so hard fighting this cancer thing, you’re against the odds, why not give up … but if you do you will never win.”

As he moored at the Gold Cost, Malcolm realized he wasn’t ready to give up.

“As a result of this trip, I realized that life is worth living,” Malcolm says.

While, after six months at sea, Malcolm returned home to try stem cell treatment, his adventure has given him a new lust for life.

“Life can be good and when I am well enough, I will go back to my boat and finish my trip,” he declares.

“I’m going back to where I belong.”

Malcolm wants other terminal cancer patients to know that they are not defined by their diagnosis.

“There are so many people in my position that would have just given up … well I did,” he says.

“But I want to show them you don’t have to give up.

Doctors said Noah wouldn’t live past age 10. This is why his mum calls it a ‘terrible gift’