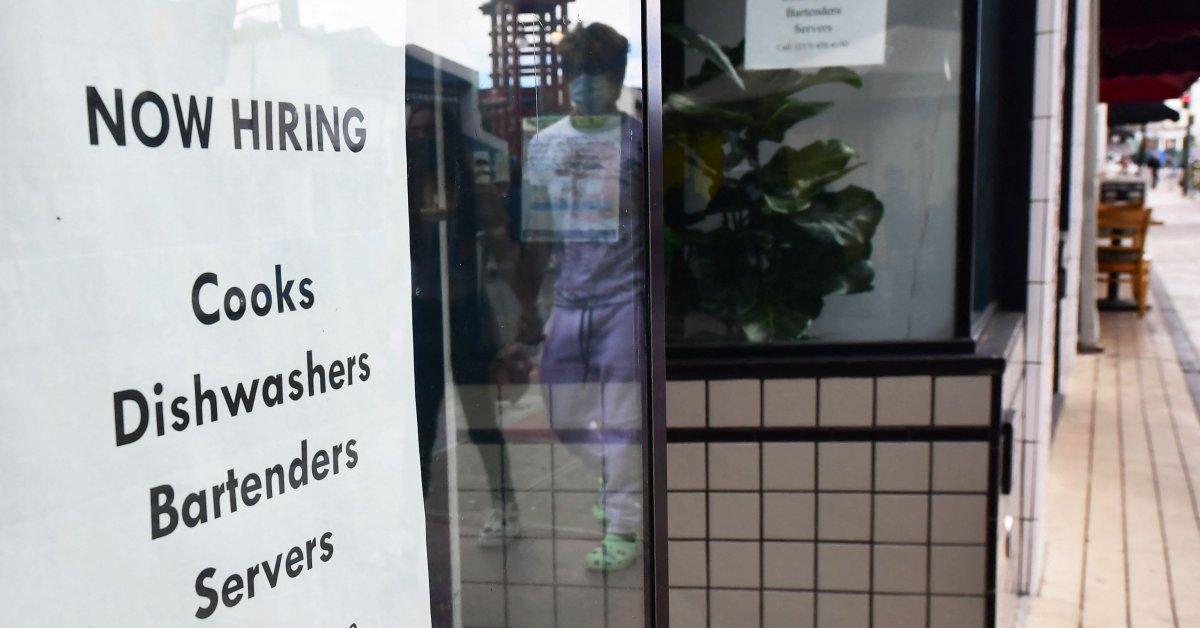 ors inflation continues to rise at historic levels and another wave of virus prevents a return to normal life, it may not seem like an ideal time for workers. But some economists say now is an opportune time to ask for a raise, if you haven’t done it already.

New reports from the Labor Department and ADP Research Institute, which tracks payroll data, show that US wages have risen across the board in the past year due to the stiff competition employers are facing to retain workers. All industries have experienced wage growth, but the greatest effects are in the private sector, where compensation jumped 4.5% year-over-year during the final quarter of 2021. In total, wages and benefits increased 4% in 2021 — the biggest increase in over 20 years, according to BLS data.

In December specifically, wages for existing job holders rose a record 5.9% compared to the year before, while workers who switched jobs saw their wages jump by an average of 8%, also a record high, ADP reports. The professional business service and information technology industries saw the greatest wage growth — around 12% on average for job switchers.

Here are the industries that saw the largest — and smallest — pay bumps in 2021, according to ADP.

The professional business service industry — which includes legal, accounting and consulting services — saw new hires received a 7.5% growth in wages in December, slightly higher than its wage growth in the third quarter of 2021. Pay also increased 6.3% for those who retained their jobs and 12.2% for those who switched jobs.

Wages in the information technology sector also increased for all employees, with new hires and existing workers both seeing a 6% growth rate. The wage growth for IT workers who switched jobs was 12.2%. This industry, which is heavily involved in the production of semiconductor equipment, saw an employment growth rate of just 1.8%.

Wages for construction workers who held their jobs rose 6.1% in December 2021, ADP’s research found. Wages also rose for new hires, but by a smaller margin of 4.7%. The construction industry also had a 4.5% employment growth rate and a 5.1% turnover rate.

Wages for manufacturing workers are also steadily increasing, with those who retained their jobs seeing a 6% increase in their pay. New hires are seeing even greater growth, with a 6.8% increase in wages. The industry itself grew by 3.2%, with a 4% turnover rate.

New hires in the education and healthcare industries saw a 3.6% increase in wages, while those who held onto their jobs saw a 5.5% wage growth. The turnover rate was relatively low compared to other industries, at 4.4%, and those who switched jobs found 5% wage growth.

The financial sector saw the least employment growth of any industry at just 1.4%, but wages still increased by 5.4% for those who stayed in their jobs. It was a different story for new hires as wages remained relatively the same, around $ 17.

This sector, which includes both agricultural and mining activities, saw a 9.5% employment growth rate in December 2021, but wages for new hires remained exactly the same: around $ 20 per hour. For those who retained their jobs, pay increased 5.2%.

Wages for those who stayed in trade and transportation jobs increased by 6.8%, though new hires in this industry saw a 1.6% decrease in wages, ADP’s research found. The American Trucking Associations, which represents the industry’s largest carriers, says the US has a shortage of 80,000 truck drivers.

Despite growth in almost every other industry, the leisure and hospitality sector faced wage stagnation. Pay for leisure and hospitality workers rose 4.5% for new hires, 6.7% for those who held onto their jobs and just 0.4% for those who switched into new jobs. This industry — which includes bars, restaurants and hotels — lost the most workers when the pandemic hit, making it a proxy for the state of the country overall economic recovery.

“While leisure and hospitality led employment gains in the first half of 2021, it is the only industry where job switchers’ wages were basically flat on average in December 2021 compared to the previous year,” says Nela Richardson, ADP’s Chief Economist.

Overall wages for leisure and hospitality employees are still strong relative to pre-pandemic times, but the deceleration in wages is largely attributed to the impact of the Omicron variant. “The scramble for available workers is a little less intense than it was six or seven months ago,” says Josh Bivens, director of research at the Economic Policy Institute.

Perhaps the best explanation for the trend of increased wages is the ubiquitous ‘help wanted’ signs posted outside stores and businesses across the nation. At the end of 2021, there were roughly 11 million job openings in the US, with the largest increase in the accommodation and food services industry.

For part of last year, wage growth was mostly concentrated in traditionally low wage sectors, but the nation’s steady reopening in the spring changed the terrain in a lot of ways: there was a huge surge in demand for workers, Bivens says.

However, the recent rise in wages is driving up costs for businesses. The US employment-cost index — a quarterly measure of wages and benefits paid by employers — shows that costs continue to rise at the highest rate in two decades, largely due to supply chain delays. Some employers are using those cost increases as an excuse to boost prices. For workers, that means bigger paychecks have largely been offset by rising prices, as inflation over the past year has cut into workers’ purchasing power. Although robust wage growth may be good news for workers, economists believe it also increases the risk of sustained high inflation.

“We are attentive to the risks that persistent real wage growth in excess of productivity could put upward pressure on inflation,” Jerome Powell, the Federal Reserve chair, said during a news conference on Jan. 26. “What we’re trying to do is get inflation, keep inflation expectations well anchored at 2 percent. That’s always the ultimate goal. “

For the time being, though, it appears workers hold an upper hand in job negotiations.

“I think people should ask for raises all the time,” Bivens says, “but I think now, the objective chance of getting a raise if you threatened to quit is more credible than it’s been for years because of the tight labor market.”

Write to Nik Popli at nik.popli@time.com.