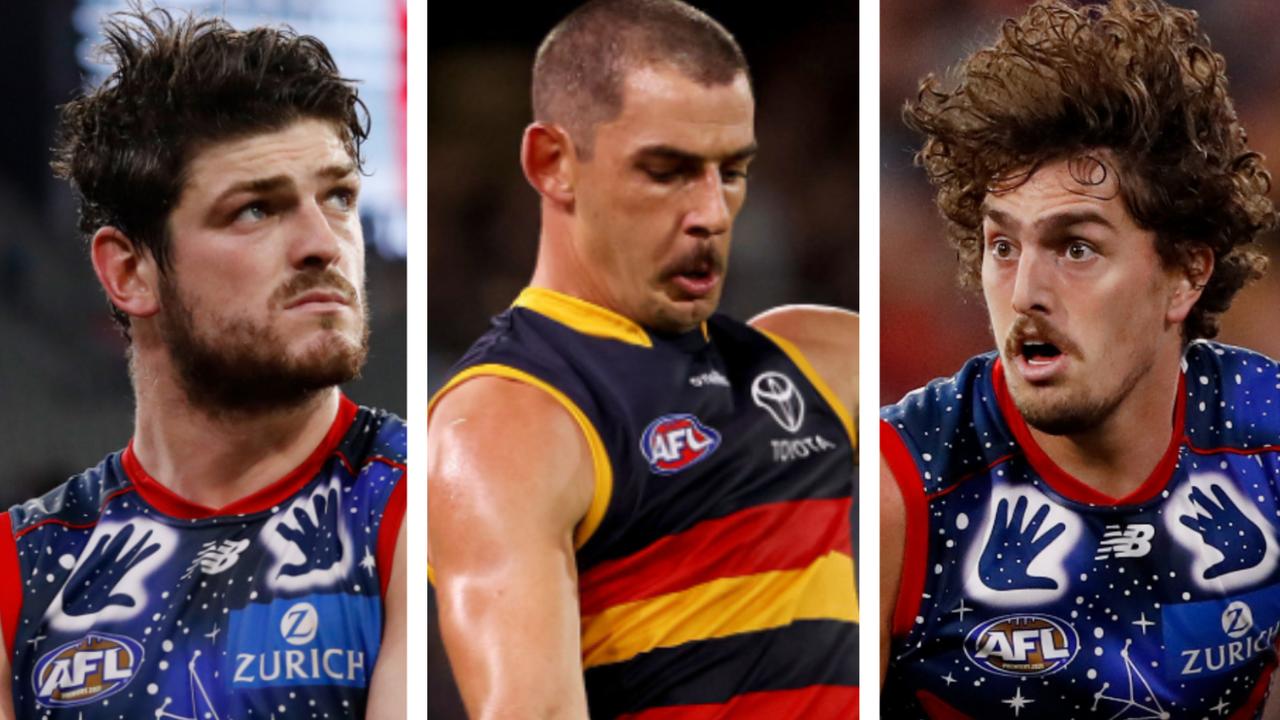 Get all the latest player movement news and updated in AFL Trade Whispers!!

Melbourne coach Simon Goodwin is a confident out-of-contract duo of Luke Jackson and Angus Brayshaw will remain Demons in 2023 and beyond.

Jackson is widely reported to be on the end of “Godfather” offers from the two WA clubs in a bid to lure him back home to Perth.

Brayshaw is another with ties to Western Australia, with brothers Andrew and Hamish, playing at Fremantle and in the WAFL respectively.

Speaking on SEN on Monday, Goodwin said the club was “progressing well” in talks with the duo.

“We expect something to be done in the not so distant future,” he said.

“We’ve got two guys there that love their footy club.

“Angus is a leader, he’s invested so much.”

When asked directly about Jackson, the prized number three draft pick in 2019, and what kind of big money offer he could command on the open market, Goodwin wasn’t too concerned.

“That’s our industry,” he said.

“If you put all your players on the open market, they’re going to get more money going somewhere else.

“But you’ve got to evaluate as a player what you want in your career, where you want to be and who you want to play with.

“We’ve created an environment where those two players love what they’re at, they’re developing and we want them there for a long time.”

WHY PORT SHOULD EYE THESE THREE MIDS

Port Adelaide should consider luring Bulldog Josh Dunkley and Giant Tim Taranto to the club for 2023 and beyond, according to Kane Cornes.

The Port premiership player said the club needed to address their midfield if they wanted to be a contender, after a quiet trade period last year where forward Jeremy Finlayson arrived at the club.

Given the uncertainty surrounding the future of Karl AmonCornes said the Power could eye off a third midfielder – GWS star Jacob Hopper.

“One’s Hopper from the Giants, hasn’t played much at all this year because of injury.

“There’s Taranto, (but) I’m not sure if you’re going to get Taranto because he’ll get massive offers from Victoria where he’s from, but you’d definitely have a crack at him.

“I’m coming around to the idea of ​​Dunkley, just because there’s not many out there.

“He’s not only a midfielder, but he gives you some versatility – can ruck, can go forward, not super polished.”

Hopper remains contracted for another year at the Giants but he hasn’t played since injuring his knee in Round 1.

Dunkley has previously tried to depart the Western Bulldogs, unsuccessfully seeking a trade to Essendon at the end of 2020.

WILL DAN MCSTAY STAY… OR GO?

The Lions are continuing their discussions with out-of-contract forward Dan McStay and hope to keep him at the club.

CEO Greg Swann on Monday said initial talks with McStay’s management had been “parked” to the Mid Season bye, but confirmed the negotiations had been recommenced.

McStay remains the subject of contract speculation with Melbourne clubs circling the forward in a bid to lure him home.

“I think the discussions are pretty positive,” Swann said on SEN.

“Those things take a bit of time. There’s obviously a little bit of interest out there.

“He is a free agent so these things don’t always happen in a hurry.

“We’re still quietly confident that he’ll stay. Hopefully we can get a resolution in the next little bit. ”

Swann said the club was well aware good forwards are “hard to come up”, and hope the club’s recent success was enough to see McStay recommit to the Lions.

“I think it’s prudent from Dan and his management to take their time and see what else is out there,” he said.

“(When I spoke to him) he remembers the real bad times, and he’s enjoying the good times.

“We’d like to think he’d stay and we’ll have some more good times in the next couple of years.

“He’s got a couple of properties up here, his partner is a local girl discussions the discussions are pretty fruitful. Hopefully we can get Dan to stay – he’s a good player. “

While refusing to be drawn into what length of deal the club would offer, Swann said talks were “positive” and he hoped a deal could be done before the season’s end.

“We had some discussions earlier in the year, but then we were going to park it to the mid season bye, but then that sneaks up on you,” he said.

CAN WALKER GET A NEW DEAL DONE?

After missing the opening three rounds due to suspension, the key forward has come back with a bang kicking 18 goals in seven games.

Reports emerged last week that a club in the “premiership window” had reached out with a two-year deal.

But speaking on Monday, Kane Cornes said he “chuckled” when he heard the rumors.

“Taylor Walker and his management are wanting some certainty over his future and you couldn’t be critical of them for that,” he said on SEN.

“He’s absolutely deserving of a contract extension at Adelaide.

“Whether that’s one or two years, I don’t know, but you certainly could make the case for him getting two if you were his management.”

Walker is an unrestricted free agent at the end of 2022.