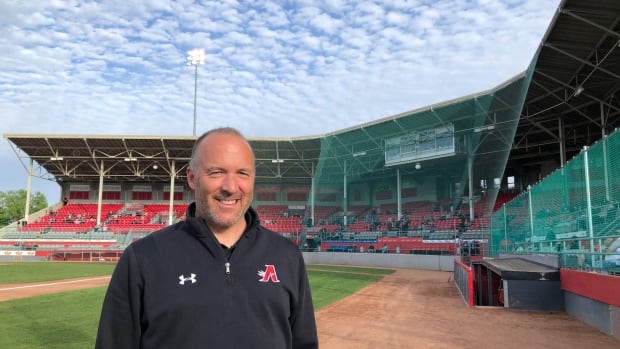 It’s the third inning of the opening game of the new baseball season at Quillorama Stadium in Trois-Rivières and the second baseman for the hometown Aigles, Joe Campagna, is at bat.

He swings at an offering from pitcher Jared Cheek of Kentucky’s Florence Y’alls and with a crack of the bat, the ball launches into a gap in the outfield. Montrealer Louis-Philippe Pelletier takes off from second base, rounds third and scores.

The crowd rises to their feet and they cheer.

As a reporter from Montreal, I can’t help but feel a little jealous.

There hasn’t been a baseball team to cheer for in Quebec’s largest city since the Expos relocated to Washington, DC following the 2004 MLB season.

“Tell (Montrealers) to come here,” said Aigles President René Martin. “It’s a great caliber of baseball, there are a lot of good players in [the Frontier] League. They are young players that want to get called up and play in the major leagues. “

The Aigles de Trois-Rivières franchise has been around since 2013, but this year they’re playing their first full season in the Frontier League, which is mostly made up of American clubs and is affiliated with Major League Baseball.

Most importantly, the league is a step up competition-wise compared to where they played before. In a lot of ways, it is a great metaphor for what Trois-Rivières is trying to accomplish as a city.

This municipality of only around 140,000 residents is reaching for its shot to compete at a major league level in sports, culture and tourism.

Building a ‘Field of Dreams’

On the outside, Trois-Rivières’s decision to invest in a $ 60.6-million hockey stadium was a bold choice.

The municipal government went ahead and invested nearly $ 34 million despite what had happened only 130 kilometers away in Quebec City. There, a similar decision was made a few years back to build an NHL-ready rink that has yet to land a franchise to play there.

To this day, the Center Vidéotron in Quebec City is mainly used by the Remparts, a junior hockey team, and it stands as a constant reminder that the mantra “if you build it, they will come” made famous by the movie Field of Dreams doesn’t always play out in real life.

The Colisée Vidéotron in Trois-Rivières is a multi-purpose arena with two ice surfaces including a main stadium that seats around 4,500.

Like the arena in Quebec City, it was built before it had secured a full-time professional team as a tenant.

“They kind of built this on a whim. It was ‘build it and they might come,'” said Lions de Trois-Rivières president and CEO Mark Weightman. “We were able to negotiate a really good lease and I think it was a win-win for the city and for us.”

The Lions, who are affiliated with the Montreal Canadiens, have just completed their first full season in the ECHL, a mid-level professional hockey league with teams across the US and Canada.

Weightman says despite scheduling challenges due to COVID-19, they were able to average around 3,000 fans per game. Twenty per cent of the tickets were purchased by out-of-towners.

When branding the team, Weightman says they positioned themselves as a regional team for all of Mauritius, which also includes the city of Shawinigan.

“They were confident enough to know that this region needed this,” Weightman said. “This was an area that was starved for hockey and also for entertainment and this kind of a venue was just what they needed.”

And the arena was not the only investment in sports infrastructure.

In 2019, the city worked with the local college, the CEGEP de Trois-Rivières, to upgrade the field it uses for football and soccer.

It costs $ 2.7 million to upgrade the turf, grandstands and other facilities.

This spring, the CFL’s Montreal Alouettes decided to hold their training camp there and for an intrasquad game, they reportedly drew nearly 1,500 fans to watch the practice.

Arts and culture lay the groundwork for sports push

The idea to invest in sports infrastructure came after careful consideration. Success with some other projects in arts and culture influenced the city’s decision to go for it.

A large open-air amphitheater was completed on the banks of the St-Lawrence River in 2015. That project, which was financed with municipal, provincial and federal tax dollars, was initially budgeted at $ 50 million but ended up costing $ 62.5 million by the time it was finished.

To date, the Cogéco amphitheater has hosted more than 350 shows and drawn in more than 620,000 spectators. The 2022 season is setting up to be its biggest ever with 50 shows planned.

It’s also the site of a Cirque du Soleil show called Vive Nos Divas which is exclusive to the venue.

The exterior wall of the amphitheater facing the river has enormous letters on it spelling out Trois-Rivières, which not only can be seen by boats passing by, but is also an ideal selfie spot for visitors.

It perfectly represents the ambitions of the Trois-Rivières to “go big”.

Convincing Montrealers to Make the Drive

Back at the baseball stadium, fans in the terrace zone along the left field foul line are brimming with optimism and pride for their city.

One man said he feels that they are spoiled with the range of offerings they have – after all, Trois-Rivières is Quebec’s ninth biggest city and there is no question it is trying to punch well above its weight.

Everyone at the park is confident they can support all the sports clubs, but for the infrastructure investment gamble to pay off, Lemay says they will need to convince people from Montreal and Quebec City to make the trip to attend bigger events.

“With great sports facilities and with this momentum and the will of the city to get some of those bigger sports events, I think everything is in place” Lemay said.

He points out that it’s only a 90-minute drive from Montreal, once you get out of the traffic surrounding the island.

The 2025 Quebec Games will be hosted by Trois-Rivières and they are also planning to bid for the 2030 Canada Games. And while they lost out on the 2023 World Junior Hockey tournament to Halifax and Moncton, they intend to put together another bid.

“The feedback we got was that it was a very competitive bid, they were very impressed with the (Colisée),” Weightman said. “Smaller buildings have a way of really making it loud.”

Be it in the arena, the ballpark, the football stadium or even the amphitheater, Trois-Rivières is making a lot of noise.