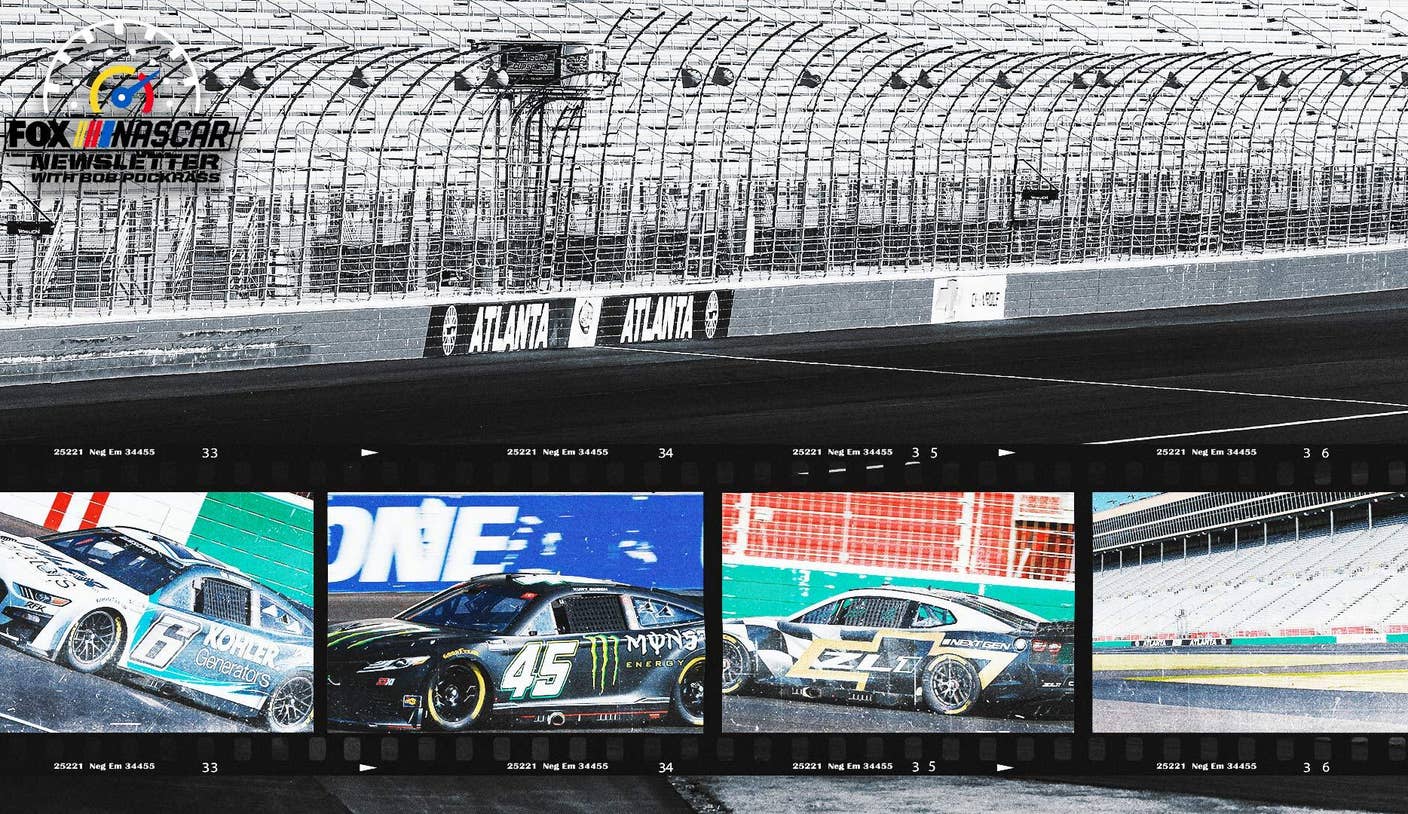 Denny Hamlin said he could be called “clueless” when it comes to how the newly reconfigured and repaved Atlanta Motor Speedway will race this weekend.

And he wouldn’t be the only one.

“I have no idea,” Martin Truex Jr.. said. “I don’t see it being three-wide in the corners. But it could be. I don’t know that the third lane could be competitive.

“You never know. It’s going to be crazy.”

Even Chris Buescherone of three drivers who took part in a Goodyear tire test at the track in January, said to count him among those with little understanding.

“I’m right in line with everybody else,” he said. “It was superspeedway-like with three cars. We were able to be wide-open and stay pretty tight.

“Handling was in play very quickly.”

Denny Hamlin discusses the changes to the wall at Atlanta, which were adjusted to make a smoother turn coming off of Turn 4. “I have no clue what I’m getting into,” he says.

Superspeedway-like is what Atlanta officials were going for when they changed the banking from 24 degrees to 28 degrees in the turns.

While the frontstretch is wider at 61 feet, 6 inches (from 55 feet), the backstretch has been reduced from 55 feet to 42 feet in width, and the turns are even more narrow at 40 feet. The transition apron went from 4 degrees to 18 degrees.

The track also adjusted a wall entering the dogleg on the frontstretch (coming out of Turn 4) because with the increased width, drivers were concerned about the wall angle and potential impact if a driver gets turned into the wall.

All those changes have NASCAR expecting racing much like at Daytona and Talladega – so much so that Cup teams will have horsepower reduced to match those tracks at 510 horsepower. They will also have the 7-inch rear spoiler. They use 670 horsepower and a 4-inch spoiler at all the other tracks.

Xfinity and truck teams will also have horsepower reduced to around the 510 that they use for Daytona and Talladega, but they will have the smaller spoiler they use on intermediate tracks.

Everyone in NASCAR is wondering how the repaved Atlanta track will race. Even drivers such as Martin Truex Jr. aren’t sure.

“You’re going to see three different types of racing over the course of the weekend,” he said Justin Allgaierwho has tested a Cup car and an Xfinity car at the track.

Allgaier said that even with his experience on the track – his Cup time was in a Chevrolet car designed to gather data, so the weight distribution on it is different than on a car that would race – and the simulator, there isn’t any way to have confidence in exactly how the cars will race.

“I think our [Xfinity] race will be very superspeedway style. Theirs [in Cup], I don’t know. It could go a lot of different directions, to be honest with you, “Allgaier said.

The question for Cup teams is if they set up the cars for pack-style racing or if they think they won’t race as much in packs, in which the aerodynamic draft makes a difference. For pack-style racing in the draft, the teams don’t worry about handling as much and have the cars designed to create as much speed as possible.

“It’s not going to be Daytona or Talladega, but are they going to be grouped together? How are you going to build your car? All of those things are going to be a question mark, and I have no clue what I’m getting into. “

NASCAR will continue the double-yellow-line rule that it uses for Daytona and Talladega – only it won’t be a double-yellow line. It will be a white-and-red line. Drivers must race above the line, which separates the racing surface from the apron. That is a safety measure to keep drivers from trying to drive on the apron and then squeeze back in line in the draft.

Justin Allgaier breaks down whether the double-yellow-line rule and choose rule should be in play at Atlanta and talks about trying an Xfinity car and the Chevrolet Next Gen wheel force car at the reconfigured track.

Buescher said the rule is necessary because without it, there would be an incentive for drivers to use the apron and there might not be enough give-and-take among the drivers to avoid big crashes. NASCAR instituted the rule in 2001 for Daytona and Talladega.

“We need to have some kind of boundaries, and at the same time, we’ve been talking about the racing surface being maybe wide enough for three-wide and the frontstretch being wide enough for six – and where in the world are you going to go? ” Buescher said.

“If you realistically get four-wide on the frontstretch – which is very doable if you use it all – where do you go from there? Somebody is going to have to give, and if it’s not the right car or truck and they end up having to enter the corner on the apron, you’re setting yourself up for disaster. “

The new track also has some bumps in Turn 2. The track did grind some areas, but there is still a dip.

“It’s going to feel like you’re going up, but it’s really caused from the fall into it first, and I think it’s large enough that it’s going to send spike loads through [the car]”Buescher said.

Chris Buescher shares why he believes the Turn 4 wall change probably won’t impact how drivers race at Atlanta following safety concerns regarding how it was positioned after the reconfiguration.

Many drivers dislike the style of superspeedway racing, which tends to cause big wrecks because the cars are bunched into packs, and throttle response is limited with reduced horsepower. That results in drivers taking more chances by trying to block another driver getting a run and less time to avoid wrecks when they start in front of the driver.

“I have no idea,” Kevin Harvick said of the Atlanta changes. “I don’t even want to get in the middle of making a comment about that place.”

The drivers do seem pleased that NASCAR made changes to the wall, though some also hoped for a change in Turn 1. The recently formed NASCAR drivers council played a role in talking to track operator Speedway Motorsports about making the change.

“If we’re bump-drafting, there’s a chance you’ll get hooked to the right on the straightaway through one of those doglegs, and that angle would just be too sharp,” he said. Ross Chastainwho was among those at the tire test.

“And we asked for help, and they were more than happy to do it. And so they poured concrete, took some of the angle out of the safer barrier. It’s not a performance thing. It’s truly just if somebody hits the wall, we want it to be a glancing, the angle to be just in line with all of our other tracks, and we didn’t feel like it was. “

Ross Chastain reveals that the drivers’ council played a role in changing the wall coming off of Turn 4 at Atlanta, based on concerns following the tire test in January.

What to watch for

It will be interesting to see the choose rule in effect at Atlanta as expected. It isn’t used at Daytona or Talladega because NASCAR wants to limit teammates’ helping each other.

This could make for some tense moments among teammates as to whether they choose to work with a teammate or someone who could help them get a better finish – and be more likely to leave them hanging with a move in the draft.

NASCAR appeals panels upheld four-race suspensions to two crew members and the crew chief for a wheel coming off Kaulig Racing and Front Row Motorsports cars at Daytona and Fontana.

NASCAR needs to have a serious penalty because of the safety issue created by a tire and wheel rolling across the track. If that gets launched into the stands or into the pit area, it could be tragic.

The problem is the new wheel assembly apparently can give a false sense of security that the wheel is tight with the one center lug nut.

Should teams be penalized? Yes. The danger is too great. But whether the suspension should be two races instead of four is up for discussion. With one lug nut, it is less likely that teams are trying to cut time from a pit stop, compared to tightening only three or four lug nuts on wheels that use five.

The necessary solution is that there can be no false sense of security. There needs to be a way for a team to know they have it tight or loose. And obviously, there should be no way for a tight lug nut to loosen on its own.

“We came up one spot short, but I’m so happy.” – Ross Chastain after finishing second at Phoenix

Bob Pockrass has spent decades covering motorsports, including the past 30 Daytona 500s. He joined FOX Sports in 2019 following stints at ESPN, Sporting News, NASCAR Scene magazine and The (Daytona Beach) News-Journal. Follow him on Twitter and Instagram @bobpockrass. Looking for more NASCAR content? Sign up for the FOX Sports NASCAR Newsletter with Bob Pockrass!

Get more from NASCAR Cup Series Follow your favorites to get information about games, news and more.