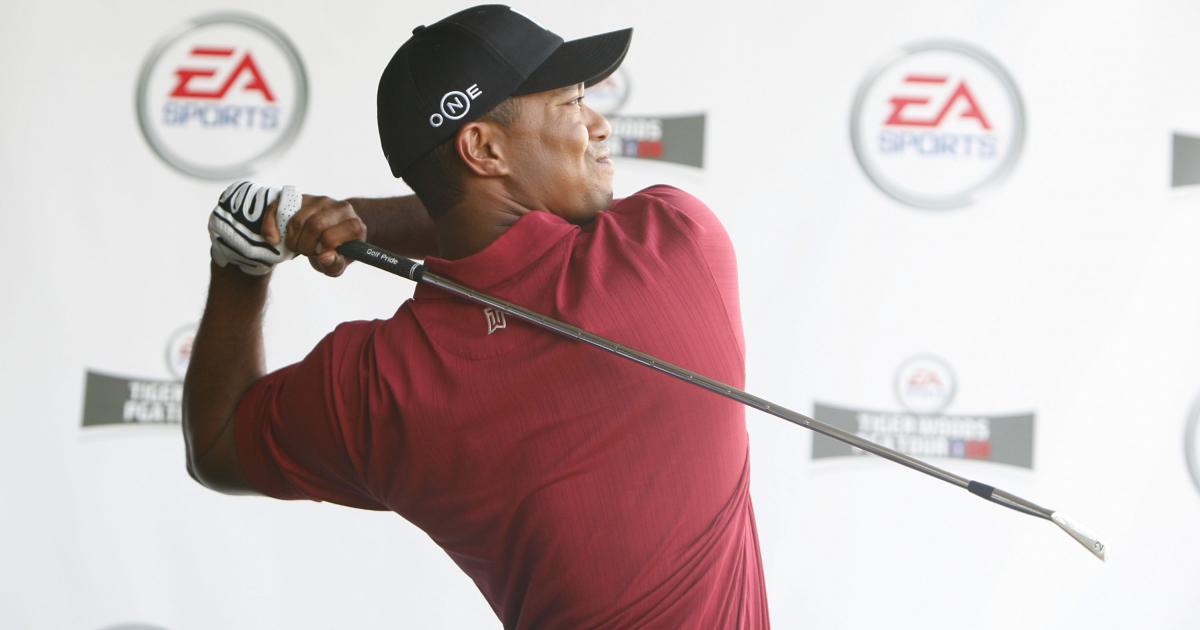 Tiger Woods has long been the face of golf. With his distinctive fist bump, a ferocious back swing and that signature Sunday-red polo, Woods brought the game of golf into living rooms across the country.

Woods then became the face of the sport’s flagship video game, inking a multi-year deal to land his name and likeness to the EA Sports’ “PGA Tour” series. The first “Tiger Woods 99 PGA Tour Golf,” released on PC and PlayStation 1 in 1998, helped establish EA Sports as the preeminent sports video game force across the world.

By 2002, the game had added an analog swing feature. The 2003 iteration of the game, widely seen as one of the greatest sports video games ever, thrust the series into a different stratosphere. Backed by the dulcet tones of DMX’s iconic anthem, “Up In Here,” the game was packed with immersive features. Game Face allowed gamers to craft each element of their character’s likeness, from facial hair to the hat players wore on the course.

The franchise continued to garner steady support as the game transitioned to next-generation consoles. According to some estimates, EA Sports sold over 25 million copies of the “Tiger Woods PGA Tour” games, a sign of just how popular Woods was at his peak.

The game remained consistent throughout the Xbox 360 / Playstation 3 era, releasing a new version every year. While fanfare dwindled as the series entered its last stages, the franchise continued innovate. A legacy mode was featured in “Tiger Woods PGA Tour 13”, allowing players to play as Tiger Woods at different points in his career. The release of “Tiger Woods PGA Tour 14” introduced the LPGA.

Woods was dropped as the game’s namesake following the release of “Tiger Woods PGA Tour 14” and replaced with Rory McIlroy, whose name and likeness appears in “Rory McIlroy’s PGA Tour”, released in the summer of 2015.

EA stepped away from golf games following the release of “Rory McIlroy’s PGA Tour,” relinquishing its licensing agreement with PGA Tour in 2018.

When was the last Tiger Woods video game?

“Tiger Woods PGA Tour 14” was the last Tiger Woods video game to be released, in March 2013. EA Sports then dropped Woods in favor of Rory McIlroy, who graced the cover for EA Sports’ next golf game, “Rory McIlroy’s PGA Tour . “

Is the Tiger Woods game coming back?

In 2021, 2K Sports announced a long-term partnership with Woodssetting the stage for Woods to return to consoles across the country.

“I am looking forward to making my return to the video game landscape, and with 2K and HB Studios, I’ve found the right partners to make it happen,” Woods said in a statement released by 2K. “I’m honored to take part in this opportunity and look forward to sharing my expertise and insights as we build the future of golf video games together.”

When does the next golf video game come out?

PGA Tour 2K21, released by 2K Sports, brought golf video games back to store shelves. The game, which featured Justin Thomas as its cover athlete, received generally positive reviews, with Steven Petite of GameSpot saying the game offers “the most realistic and pure golf experience in a game to date.”

Meanwhile, in March 2021, EA Sports announced plans to restart the series. The franchise, now titled “EA Sports PGA Tour”, is due to be released on “next generation platforms” some time next year.