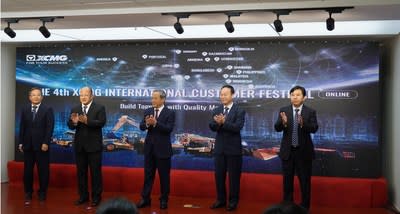 XUZHOU, China, May 30, 2022 / PRNewswire / – XCMG (SHE: 000425) has hosted its fourth International Customers Festival (the “Festival”) starting from May 20 online, with 16 online sessions and offline venues across five continents livestreaming globally and interacting with the main session set in Xuzhou, Chinalasting 10 days to May 30.

Through the lens that overcomes the limitation of time and space, XCMG has introduced its latest intelligent technology and unmanned control technology to construction equipment rental companies, developers and contractors for mines and infrastructures, as well as emphasizing its commitment to green, low-carbon development of new energy and electric products. At the Festival, XCMG reached the global strategic partnership with Shell to partner strategically in promoting high quality development.

“2022 marks the 17th anniversary of OCR and XCMG’s cooperation, we’ve witnessed how XCMG has become a leading brand with wide influence in Thailand. We’ve invited veteran staff who’s been with the company for 17 years to join the Festival, as well as highlighted the first XCMG equipment that has been in service for 17 years, ” said Sirapop Tantitham, GM of OCR Company Limited. “We’ve highlighted three product categories as a branch session host in Thailandincluding the electric loaders that created a stir in Thailand’s construction machinery industry, witnessing XCMG’s electric products have been reported by multiple media in Thailand. “

Hanson Liuvice president of XCMG and general manager of XCMG Import & Export, noted that XCMG’s export has maintained a high growth rate with the export market map of 187 countries and regions, in the first quarter, the export of China’s construction machinery industry increased by 48 percent year-on-year, and XCMG’s exports has increased by 143 percent year-on-year.

“The export volume of cranes, excavators, loaders and road machinery has taken lead across the industry with continuous growth of market share, XCMG’s overall export market share has increased by 9 percent year-on-year,” Liu said. “We are seeing changes in the export trend as well, with significant growth in the high-end markets in Europe, North America and Australia. In the first quarter, the sales volume of product exported to Europe has increased by over 100 percent. “

“We hosted the XCMG International Customers Festival for the first time in Germany and presented over 200 products from 35 lines covering four categories, including excavators, aerial work platforms, road rollers and more, among which, the small excavators from XCMG is now the most popular Chinese brand in Europe and a star model of our promotion at the Festival, “he said Xuan Du, Deputy GM of XCMG European Sales and Services GmbH.

The annual Festival further consolidates XCMG’s international development strategy. The world’s largest countries are introducing stimulus policies for infrastructure in the post-pandemic period, and the demand for construction machinery has been high.

“XCMG will live up to the expectations and fight side by side with our global partners to push forward our digital, green and international strategies, contributing to the world with more dynamic, high-quality development and a globally competitive XCMG,” he said. Wang Minchairman and CEO of XCMG.